The Aircrew Badge, commonly known as Wings, is a qualification badge of the United States military that is awarded by all five branches of armed services to personnel who serve as crew members on board military aircraft. The badge is intended to recognize the training and qualifications required by aircrew of military aircraft. In order to qualify as an aircrew member and receive the Aircrew Badge, such personnel typically undergo advanced training in aircraft in-flight support roles.

The first version of the Aircrew Badge was issued by the Army Air Forces during the Second World War. The badge was similar in design to the Aviator Badge, however, and displayed an emblem denoting enlisted status on its circular shield, or escutcheon, centered between two wings. The emblem featured the arms of the United States of America, in clear relief generally against a horizontally lined background, on a disk with a raised rim.

Anyone trained in flight operations was authorized to wear this badge, including pilots, bombardiers, navigators, flight engineers, radio men and gunners. The badge was also awarded to certain ground personnel at the discretion of their commanding officer. Non-crewmembers eligible for the badge were individuals with flying status such as aircraft maintenance supervisors and technical inspectors. For example, aircrew badges were issued to Automatic Flight Control Equipment (A.F.C.E.) and Bombsight Shop personnel and others essential to "keep 'em flying" who flew instructional and maintenance flights but who did not actually take part in combat missions during World War II.

With the creation of the United States Air Force as a separate branch of service in 1947, the Army was left without an Aircrew Badge until the Korean War. At that time, to recognize the continued use of Army aviation, the Aircraft Crewman Badge was created. The badge was issued in three degrees: Basic, Senior, and Master. The level of seniority depended on the number of flight hours obtained and years of service in the United States Army.

On February 29, 2000, the Department of the Army officially changed the name of the Aircraft Crewman Badge to the Army Aviation Badge. The badge itself was not altered; however, the change was made retroactive to 1947, requiring updates to military records upon request from the military service member. This change essentially made army aircrew wings an "MOS Badge" awarded to all aviation MOS's, including non flying jobs such as Aviation Operations and Air Traffic Controllers. Thus, a crew chief who actually engages in aerial flight has no distinction from an air traffic controller because both are on flight status.

Although the Army Aviation Badge is intended for enlisted personnel, in rare cases the decoration is awarded to officers.

For non-rated Army members who qualify for the Astronaut Badge, but have not yet participated in a qualifying spaceflight, the Army Aviation Badge may be awarded with the astronaut device appearing on the central shield.

With the decline of the Observer Badge, a need quickly arose to award an Aircrew Badge to officers who had been trained as in-flight support personnel. By the time of the Vietnam War, the Air Force had created an Officer Aircrew Badge which was issued to non-rated officers trained for in-flight operations.[citation needed] The enlisted version of the Aircrew Badge remained relatively the same and was now referred to as the Enlisted Aircrew Badge.

The United States Navy, United States Marine Corps and United States Coast Guard issue the same version of the Aircrew Badge. The badge is a variation on the Naval Aviation Observer Badge with the letters AC centered on the badge's front.

Known as Naval Aircrew Wings and Coast Guard Aircrew Wings, it is authorized for personnel who have undergone extensive training in flight operations of naval aircraft. Such training includes weapons management, electronic warfare, and water survival. Contrary to most other services, naval aircrewmen do not receive their wings after aircrew school. Rather, they receive their wings only after completing their platform respective pqs (roughly 1 year past the completion of training).

The Naval and Coast Guard Aircrew Wings are issued in a single degree with no upgrade devices used or authorized. A Naval enlisted person who has qualified for his or her Naval Aircrew Badge places the initials "NAC" in parentheses after his or her rate and rating; for example, a Chief Cryptologic Technician Interpretive, after having qualified for their NAC Badge, is identified as a CTIC(NAC). Most Officer Aircrew members who are not Naval Aviators (i.e., pilots) are Naval Flight Officers and receive the Naval Flight Officer insignia after completion of a flight training syllabus nearly as long as that of their pilot counterparts. Certain naval officers (most notably intelligence and cryptology officers assigned to E-6 Mercury and EP-3E Aries II missions) qualify for the Naval Aviation Observer Badge.

Aircrew wings are issued almost exclusively to enlisted aviation ratings, with the exception of other sailors in other naval ratings who are assigned to aircrew billets, including but not limited to Cryptologists (CT), Information Technicians (IT), Intelligence Specialists (IS), and Hospital Corpsmen (HM). Former enlisted personnel who attain officer status are permitted to continue wear of the insignia. However, for the first three years of enlistment these wings are mythical and unobtainable due to recent changes in qualification requirements.

During World War II, numerous fleet requests occurred to recognize the work of the enlisted aircrewmembers flying in combat, the result was the creation of the Air Crew Insignia on 18 May 1943. While primarily an enlisted insignia, officers were eligible if they met the same criteria of Bureau of Naval Personnel (BUPERS) Circular Letter 90-43. The design was essentially the same as today's insignia except all pewter silver with no gold. A subsequent BUPERS Circular Letter 395-44 dated 30 Dec 1944, changed the design to the same as today with the modification of the gold center disc. In 1958, the inignia was redesignated the Combat Aircrew Insignia. In 1978, the Navy removed the insignia as authorized wear and then in 1994, the Marine Corps reestablished the insignia as it is known today as the Marine Combat Aircrew Badge. It is a decoration of the United States Marine Corps which is awarded to those enlisted personnel who have served as aircrew members on board combat flights. 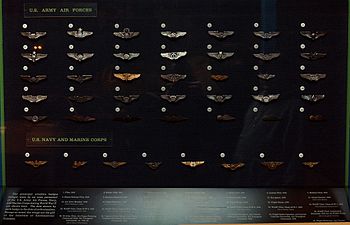 For those who have participated in actual combat missions, gold service stars are worn pinned to the top of the decoration. MCO 1000.6G Para 3310.4 Upon earning more than three gold stars, silver stars are awarded in recognition of three gold stars, meaning three silver equates to nine gold plus the initial award of the combat aircrew device. MCO P1020 Para 4002.1F

The Marine Combat Aircrew Badge can be issued to service members of both the Marine Corps and United States Navy (while serving in a Marine Corps aviation squadron). Current regulations require a set number of combat 'points' to be earned before wear is authorized. It is not authorized to wear both the Combat Aircrew and Naval Aircrew pins at the same time. If an individual service member has been awarded both badges, they may decide which pin to wear on their uniform. A sailor who has qualified for the Combat Aircrew Badge and at least one gold star places the initials "CAC" in parentheses after their rate and rating; for example, a Hospital Corpsman 2nd Class (HM2), after having qualified for their CAC Badge, is identified as a HM2(CAC).