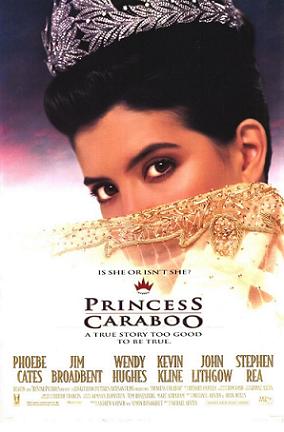 "Princess Caraboo" is a 1994 film, directed by , based on the real-life 19th-century character , who passed herself off in British society as an exotic princess who spoke a strange foreign language. She is played in the film by . The film was written by and John Wells. The original music score was composed by .

In 1817, a young woman appears in the English countryside, wearing exotic garb and speaking gibberish. She also bears unusual s, that resembled Polynesian tattoos, on her legs. Delivered to a nearby manor, the mystery woman is sheltered by the Worralls, who are then persuaded by their suspicious butler Frixos to have the drifter tried for vagrancy and begging, capital crimes. At the hearing, however, the woman persuades the magistrates through pantomime that she is a princess of Polynesian origin named Caraboo, escaped from pirate kidnappers. The Worrals welcome Caraboo back into their home, lavishing upon her the deference due a royal member. A society sensation, Caraboo wins over a linguist, the prince regent, and even Frixos. Only an Irish reporter, Gutch, remains skeptical about Caraboo's origins.