Princeton University Department of Psychology
"Green Hall" redirects here, not to be confused with Hall Green; for other uses, see Green room (disambiguation)

The Princeton University Department of Psychology, located in Green Hall, is an academic department of Princeton University on the corner of Washington St. and William St. in Princeton, New Jersey. For over a century, the department has been one of the most notable psychology departments in the country.[1] It has been home to psychologists who have made well-known scientific discoveries in the fields of psychology and neuroscience (e.g., adult neurogenesis in primate brains,[2] cognitive miser,[3] bystander non-intervention,[4] face-selective neurons in primate brains,[5] feature integration theory,[6] mental models theory,[7] prospect theory).[8]

The department's undergraduate and graduate programs are highly ranked and the department has developed a well-respected neuroscience program.[9] The department has over forty faculty members,[10][11][12] over forty graduate students,[13] and over one hundred undergraduate students.[14] The faculty have received numerous awards, which include a Nobel Prize,[15] six Distinguished Contributions awards from the American Psychological Association,[16][17][18] and three William James Fellow awards[19] from the Association for Psychological Science (APS). Additionally, two faculty members have previously served as presidents of the APS,[20] twelve faculty members are fellows of the APS,[21] and four faculty members have been inducted into the National Academy of Sciences.[22]

Since 2002, the department has been chaired by social psychologist Deborah Prentice.[23]

In 1893, fourteen years after Wilhelm Wundt founded the first psychology laboratory in the world, a Psychology Laboratory was built in Nassau Hall, the oldest building in the university, under the leadership of J. Mark Baldwin. In 1915, psychology received recognition in the title when the department was renamed Department of Philosophy and Psychology. It was not until 1920, however, that the Department of Psychology was established with Howard Warren as its first chairman.[1] In 1924, Eno Hall was constructed to house the department. The building was named in honor of Henry Eno, the principal donor and research associate in psychology. Warren was also a donor, but he chose to keep his donation anonymous at the time. He commented that it was "the first laboratory in this country, if not in the world, dedicated solely to the teaching and investigation of scientific psychology."[24] According to university president John Hibben, the laboratory was the realization of a dream that Warren had cherished for a long time.

University president James McCosh was primary professor of psychology in the early days of the department.[25][25] Baldwin, who studied under both McCosh and Wundt, continued this tradition.

In 1963, the department relocated to Green Hall on the corner of Washington St. and William St. The building, which had been previously occupied by the School of Engineering, was redesigned by university alumnus Francis W. Roudebush for the use of the psychology and sociology departments.[26]

In 1972, the Princeton Psychology Colloquium Committee, which schedules weekly speeches and discussions for psychology students, invited Richard Herrnstein, psychology professor at Harvard University to speak about the vision of pigeons.[27] At the time, Herrnstein was the victim of serious criticism because he had written an article in which he argued that genetic differences would play an increasingly larger role in the determination of social status.[28] Because Princeton's University Action Group, a radical student organization, threatened to sabotage the event on the grounds that Herrnstein was a racist, the Harvard professor canceled his appearance. Kamin asserted that "the climate in which [Herrnstein's] decision was made raises serious questions about freedom of speech."[27]

Most of the department's graduates from the classes of 2004 to 2007 had placements in the faculties of research universities and post-doctoral positions.[13] Thanks to a group of faculty and students who work across traditional disciplines and departments, interdisciplinary research and scholarship in the department has grown significantly since the end of the twentieth century.[1][9]

The graduate study is focused on systems neuroscience, cognitive neuroscience, perception and cognition, personality and social psychology, and physiological psychology. It is a preparatory program for a Ph.D., which takes approximately five years to complete,[13] and a career of scholarship in psychology.[33] Every year, six doctoral degrees and eight master's degrees are awarded on average.[34] Students in the university's M.D./Ph.D. program, run jointly with the Robert Wood Johnson Medical School at the University of Medicine and Dentistry of New Jersey, are also able to pursue their doctoral degree in the department.[35]

Laboratory units are organized around the research programs of the faculty. These programs range from animal motivation and conditioning processes to decision making in human social groups, from neurophysiological mechanisms controlling basic drives to attributional processes in judging other individuals, from the sensory and perceptual roots of human cognition to concept formation and problem solving behavior in the child and adult, from the mathematical and computer techniques employed in research to the mechanisms of attitude formation and change.

The department is "a presence in the burgeoning field of cognitive psychology."[45] The research of the cognitive psychology program's faculty spans a wide set of issues within the study of cognitive processes that include cognitive control, memory, judgment and decision making, language processing, reasoning, and visual perception. The highly interdisciplinary quality of these topics of study results in research that is interactive and multifaceted. Most of the research is conducted at the intersection of fields like computer science and neuroscience. 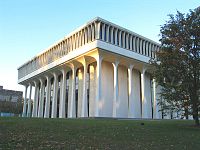 Robertson Hall, home of the Woodrow Wilson School of Public and International Affairs

Run jointly by the university's Woodrow Wilson School of Public and International Affairs and the Department of Psychology, the program was planned with the intent of being a “discipline plus” degree.[46] The growing interest in the incorporation of psychology in law schools and public policy schools is another reason why the program was established.[47] Such interest is evidenced by the fact that five members of the Department of Psychology's faculty have an additional appointment at the Woodrow Wilson School[48] and the fact that the department is one of the sponsors of the Princeton Graduate Student Conference on Psychology and Policymaking.[49]

Additionally, undergraduate students can enroll in the Program in Neuroscience, which encourages the study of molecular, cellular, developmental, and systems neuroscience as it interfaces with cognitive and behavioral research, to earn a Neuroscience Certificate.[52]

The Senior Lecturer in the department is Andrew Conway.[55]

The Director of Clinical Psychological Studies is Ronald Comer.[56]

Alumni in academic and research institutions

Unless otherwise noted, a date indicates the year in which a Ph.D. was conferred.

fMRI scanner in the basement of Green Hall

The department is closely affiliated with the Center for the Study of Brain, Mind, and Behavior (CSBMB), which fosters research on the neural underpinnings of psychological function and plays a central role in the. Located in the basement of Green Hall, the CSBMB houses state of the art facilities for the study of brain function, including a research-dedicated, high-field fMRI scanner, an EEG laboratory, a TMS coil, an eye tracking laboratory, and high-performance computing facilities for data analysis and computational modeling.[90] Seventeen faculty members from the department are affiliated with the CSBMB.[91] Unique among research institutions that own and operate fMRI scanners, the CSBMB is the first facility to own a scanner that is run solely by neuroscientists that conduct basic research. Most scanners in the United States are located in clinical settings and are utilized primarily in applied research.[9]

When the University unveiled its $1.75 billion capital campaign in 2007, it allocated $300 million to build a 240,000 sq ft (22,000 m2). headquarters for the department on a site of about 98 acres (400,000 m2).[92] The psychology building, which would be in the shape of a half-circle cylinder, will consist of five floors above general ground level and one floor below ground level.[93] The department will share this space with the Princeton Neuroscience Institute. The complex will house state-of-the-art labs, faculty offices, and classrooms in an attempt to push the university to the forefront of neuroscience and behavioral science research.[94] Due to the economic environment, however, the construction of the new building has been postponed.[92] The start date for the construction has been postponed until June 2010.[95]

Reading Room of the Psychology Library

In 1963, the department moved to Green Hall; a room located next to the lobby in the first floor served as the department's academic library. In 1968, two more rooms were added to house monographs and journal stacks. In 1990, the third journal room was moved into the basement to accommodate compact shelving. The Psychology Library, a branch of Princeton University Library, underwent significant renovations in 2002. The basement room was no longer used because the library gained a Reading Room, which has become a popular study space for psychology concentrators. A ramp that leads to the second room was built to ease the reshelving of materials. A librarian’s office was built next to one of the computer clusters.

As of 2006, the Psychology Library contains a large collection of material.[96] The library's collections will be moved to Lewis Library once the new psychology and neuroscience buildings are complete.[97]