Orion, often referred to as The Hunter, is a prominent constellation located on the celestial equator and visible throughout the world. It is one of the most conspicuous, and most recognizable constellations in the night sky.[1] Its name refers to Orion, a hunter in Greek mythology.

Orion as depicted in Urania's Mirror, a set of constellation cards published in London c.1825.

Orion includes the prominent asterism known as the Belt of Orion: three bright stars in a row. Surrounding the belt at roughly similar distances are four bright stars, which are considered to represent the outline of the hunter's body. Descending from the 'belt' is a smaller line of three stars (the middle of which is in fact not a star but the Orion Nebula), known as the hunter's 'sword'.

In artistic renderings, the surrounding constellations are sometimes related to Orion: he is depicted standing next to the river Eridanus with his two hunting dogs Canis Major and Canis Minor, fighting Taurus the bull. He is sometimes depicted hunting Lepus the hare. He also sometimes is depicted to have a lion in his hand.

There are alternative ways to visualize Orion. From the Southern Hemisphere, Orion is oriented differently, and the belt and sword are sometimes called the Saucepan, or Pot in Australia/New Zealand. Orion's Belt is called Drie Konings (Three Kings) or the Drie Susters (Three Sisters) by Afrikaans speakers in South Africa,[2] and are referred to as les Trois Rois (the Three Kings) in Daudet's Lettres de Mon Moulin (1866). The appellation Driekoningen (the Three Kings) is also often found in 17th- and 18th-century Dutch star charts and seaman's guides. The same three stars are known in Spain and Latin America as "Las Tres Marías" (Spanish for "The Three Marys").

Orion can be easily seen in the night sky from November to February of each year - late fall to winter in the Northern Hemisphere, late spring to summer in the Southern Hemisphere. In the tropics (less than about 8° from the equator) the constellation transits at the zenith. 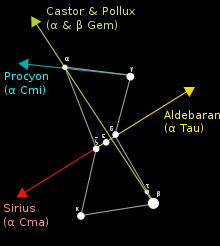 Orion is very useful as an aid to locating other stars. By extending the line of the Belt southeastward, Sirius (α CMa) can be found; northwestward, Aldebaran (α Tau). A line eastward across the two shoulders indicates the direction of Procyon (α CMi). A line from Rigel through Betelgeuse points to Castor and Pollux (α Gem and β Gem). Additionally, Rigel is part of the Winter Circle. Sirius and Procyon, which may be located from Orion by following imaginary lines (see map), also are points in both the Winter Triangle and the Circle.[5]

Of the lesser stars, Hatsya (or Iota Orionis) forms the tip of Orion's sword, whilst Meissa (or Lambda Orionis) forms Orion's head. In common with many other bright stars, the names Betelgeuse, Rigel, Saiph, Alnitak, Mintaka, Alnilam, Hatsya and Meissa originate from the Arabic language.

The same three stars are known in Latin America as "The Three Marys."[17] They also mark the northern night sky when the sun is at its lowest point, and were a clear marker for ancient timekeeping.

Richard Hinckley Allen lists many folk names for the Belt of Orion. The English ones include: Jacob's Rod or Staff; Peter's Staff; the Golden Yard-arm; the L, or Ell; the Ell and Yard; the Yard-stick, and the Yard-wand; the Ellwand; Our Lady's Wand; the Magi; the Three Kings; the Three Marys; or simply the Three Stars.

The passage "Canst thou bind the sweet influences of Pleiades, or loose the bands of Orion?" is found in the Bible's Book of Job.

Around October 21 each year the Orionid meteor shower reaches its peak. Coming from the border with the constellation Gemini as many as 20 meteors per hour can be seen.

Hanging from Orion's belt is his sword, consisting of the multiple stars θ1 and θ2 Orionis, called the Trapezium and the Orion Nebula (M42). This is a spectacular object which can be clearly identified with the naked eye as something other than a star. Using binoculars, its swirling clouds of nascent stars, luminous gas, and dust can be observed.

Another famous nebula is IC 434, the Horsehead Nebula, near ζ Orionis. It contains a dark dust cloud whose shape gives the nebula its name.

Besides these nebulae, surveying Orion with a small telescope will reveal a wealth of interesting deep-sky objects, including M43, M78, as well as multiple stars including Iota Orionis and Sigma Orionis. A larger telescope may reveal objects such as Barnard's Loop and the Flame Nebula (NGC 2024), as well as fainter and tighter multiple stars and nebulae.

All of these nebulae are part of the larger Orion Molecular Cloud Complex, which is located approximately 1,500 light-years away and is hundreds of light-years across. It is one of the most intense regions of stellar formation visible in our galaxy.

Star formation in the constellation Orion as photographed in infrared by NASA's Spitzer Space Telescope.

The stars of Orion were associated with Osiris, the sun-god of rebirth and afterlife, by the ancient Egyptians.[20][21][22]

Orion has also been identified with the last Egyptian Pharaoh of the Fifth Dynasty called Unas who, according to the Pyramid Texts, became great by eating the flesh of his mortal enemies and then slaying and devouring the gods themselves. This was based on a belief in contiguous magic whereby consuming the flesh of great people would bring inheritance of their power.[21] After devouring the gods and absorbing their spirits and powers, Unas journeys through the day and night sky to become the star Sabu, or Orion.[20] The Pyramid Texts also show that the dead Pharaoh was identified with the god Osiris, whose form in the stars was often said to be the constellation Orion.[20]

The Bible mentions Orion three times, naming it "Kesil" (כסיל, brute, strong): Job 9:9 ("He is the maker of the Bear and Orion"), Job 38:31 ("Can you loosen Orion`s belt?"), and Amos 5:8 ("He who made the Pleiades and Orion"). In ancient Aram, the constellation was known as Nephila, Orion's descendants were known as Nephilim.[23] 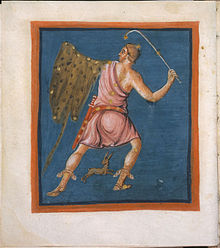 Orion's current name derives from Greek mythology, in which Orion was a gigantic hunter of primordial times.[24] Some of these myths relate to the constellation; one story tells that Orion was killed by a giant scorpion; the gods raised him and the Scorpion to the skies, as Scorpio/Scorpius. Yet other stories say Orion was chasing the Pleiades.[25]

In medieval Muslim astronomy, Orion was known as al-jabbar "the giant".

In China, Orion was one of the 28 lunar mansions Sieu (Xiu) （宿）. Known as Shen （參）, literally meaning "three", it is believed to be named so for the three stars located in Orion's belt. (See Chinese constellations)

The Chinese character 參 (pinyin shēn) originally meant the constellation Orion (Chinese: 參宿; pinyin: shēnxiù); its Shang dynasty version, over three millennia old, contains at the top a representation of the three stars of Orion's belt atop a man's head (the bottom portion representing the sound of the word was added later).[26]

The Rig Veda refers to the Orion Constellation as Mriga (The Deer).[27]

In old Hungarian tradition, "Orion" is known as (magic) Archer (Íjász), or Scyther (Kaszás), by recently rediscovered myths he is rather called Nimrod (Hungarian "Nimród"), the biggest hunter, father of the twins Hun and Hungarian (Hungarian "Hunor" and "Magor"). The "π" and "o" stars (on upper right) form together the reflex bow or the lifted scythe. In other Hungarian traditions, "Orion's belt" is known as "Judge's stick" (Bírópálca).[28] In Scandinavian tradition, "Orion's belt" was known as Frigg's Distaff (Friggerock) or Freyja's distaff.[29]

The Seri people of northwestern Mexico call the three stars in the belt of this constellation Hapj (a name denoting a hunter) which consists of three stars: Hap (mule deer), Haamoja (pronghorn), and Mojet (bighorn sheep). Hap is in the middle and has been shot by the hunter; its blood has dripped onto Tiburón Island.[30]

The imagery of the belt and sword has found its way into popular western culture, for example in the form of the shoulder insignia of the 27th Infantry Division of the United States Army during both World Wars, probably owing to a pun on the name of the division's first commander, Major General John F. O'Ryan.

The defunct film distribution company Orion Pictures used the constellation as its logo.

Orion is presently located on the celestial equator, but it will not always be so located due to the effects of precession of the Earth's axis. Orion lies well south of the ecliptic, and it only happens to lie on the celestial equator because the point on the ecliptic that corresponds to the June solstice is close to the border of Gemini and Taurus, to the north of Orion. Precession will eventually carry Orion further south, and by AD 14,000 Orion will be far enough south that it will become invisible from the latitude of Great Britain.[31]

Further in the future, Orion's stars will gradually move away from the constellation due to proper motion. However, Orion's brightest stars all lie at a large distance from the Earth on an astronomical scale—much farther away than Sirius, for example. Orion will still be recognizable long after most of the other constellations—composed of relatively nearby stars—have distorted into new configurations, with the exception of a few of its stars eventually exploding as supernovae. For example, Betelgeuse, the "right shoulder," is so large and old that it may explode and disappear within a few thousand years.