Osbaldwick is a village and civil parish in the unitary authority of the City of York in North Yorkshire, England. It has been in existence since at least the 11th century, and is now a conservation area. It is the burial place of the nun Mary Ward.

It is mentioned three times in the Domesday Book as Osboldewic.[1] It is named after Osbald, an earl in the kingdom of Northumbria. The village is home to Osbaldwick Hall and the 12th-century St Thomas Church, although this has been extended with a modern building. The village has been a Conservation Area since 1978.

Osbaldwick is now effectively a suburb of York, about 2 miles (3.2 km) east of the city. The village proper lies mostly along one street (Osbaldwick Village); newer housing surrounds this and Osbaldwick is now effectively bounded on three sides by the A1079 to the south, the A64 (forming part of York's Ring Road) to the east and by green-belt land to the north, although this is under threat. To the west, newer housing merges into the Tang Hall district.

Light industrial/trading estates exist to the east of the village (heading towards Murton) and along Osbaldwick Link Road which links it to the A1079, with a large home improvement store on the edge of the village. A new (2006) housing development known as Murton Gardens was built by Wimpey Homes on the link road, on the site of a farm building and surrounding fields; and (more controversially) a development known as Derwenthorpe was granted planning permission on 10 May 2007 for the green-belt land north of the village. Some farmland also exists between Osbaldwick and Murton. 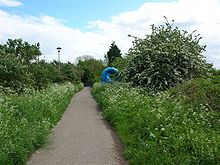 Osbaldwick is served by a bus route which runs every ten minutes at peak times through Osbaldwick, Tang Hall, Layerthorpe and the city centre, continuing on to Clifton Moor. The village is also served by a number of buses running from the edge of Osbaldwick on the A1079 (Hull Road).

Between 1913 and 1926 Osbaldwick was served by a station on the Derwent Valley Light Railway. This line remained open to freight until 1981, and a Sustrans cycle path now runs on the former track bed from the village into York.[2]

Osbaldwick is the burial place of the Roman Catholic nun Mary Ward, who founded the Institute of the Blessed Virgin Mary, also known as the Sisters of Loreto.

The Osbaldwick Parish Council have recently launched a website to keep residents updated on events and news in the Local community. This can be found at http://www.osbaldwick.com

The village has two pubs, the Derwent Arms in the old part of the village and the Magnet near the newer houses on Osbaldwick Lane, as well as a small number of local shops, a fish and chip shop and a Chinese takeaway. The village post office closed in July 2003.

The Derwent Arms was built in 1823 when it was known as The Black Bull. It consisted of the main pub house and a stable for two horses with a granary over it. To the right were two cow houses with a small orchard and pig pen behind. In front of this was another outbuilding. In the early years the pub had a wash house. Later, a long cattle shed for eight or nine cows was added onto the west side of the stable.[3] It was later renamed The Derwent Arms after the Derwent Valley Light Railway that used to run through the village. It currently consists of a rendered brick building with the public rooms on the ground floor and accommodation for the owners above. At the back of the main building there is an outbuilding which is used for storage. The pub has a large field which is used to host community events such as the village fair and a bonfire night. There is a medium sized beer garden and a children's play area with climbing equipment and a slide.

The pub is a meeting place for the Cycling City York led cycle rides which take place in the York area,[4] and is a small Camping and Caravanning Club Certificated Site (CS)[5]