/ˈkɒnvərs/) is an American shoe company that has been making shoes, lifestyle fashion and athletic apparel since the early 20th century. Converse is one of the earliest pioneers in the sneaker and sporting good industry founded in 1908.[citation needed]

In his late 30s, Marquis Mills Converse, who was previously a respected manager at a footwear manufacturing firm, opened the Converse Rubber Shoe Company (unrelated to the Boston Rubber Shoe Company founded by fourth cousin Elisha Converse) in Malden, Massachusetts in February 1908. The company was a rubber shoe manufacturer, providing winterized rubber soled footwear for men, women, and children. By 1910, Converse was producing 4,000 shoes daily, but it was not until 1915 that the company began manufacturing athletic shoes for tennis.

The company's main turning point came in 1917 when the Converse All-Star basketball shoe was introduced. Then in 1921, a basketball player named Charles H. "Chuck" Taylor walked into Converse complaining of sore feet. Converse gave him a job. He worked as a salesman and ambassador, promoting the shoes around the United States, and in 1923 his signature was added to the All Star patch. He continued this work until shortly before his death in 1969.

When the U.S. entered World War II in 1941, Converse shifted production to manufacturing rubberized footwear, outerwear, and protective suits for the military. Widely popular during the 1950s and 1960s, Converse promoted a distinctly American image with its Converse Yearbook. Artist Charles Kerins created cover art that celebrated Converse's role in the lives of high school and college athletes.

Through its shoes, Converse developed into an iconic brand, and came to be seen as the essential sports shoe. In the 1970s, Converse purchased the trademark rights to Jack Purcell sneakers from B.F. Goodrich.[2]

Converse lost much of its apparent near-monopoly from the 1970s onward, with the surge of new competitors, including Puma and Adidas, then Nike, then a decade later Reebok, who introduced radical new designs to the market. Converse found themselves no longer the official shoe of the National Basketball Association, a title they had relished for many years. While being employed at Converse, one of its employees (Jim Labadini {1968-78}), created the chevron and star insignia / logo that still remains on most of the footwear items.

The new team drove Converse from the 16th largest footwear company to number 7 in less than 2 1/2 years, leading to a buyout by rival Nike on July 9, 2003 for $305 million, qualifying as the merger and acquisition of the year in 2003.[3] After Converse was bought by Nike, operations were moved from the United States to overseas. 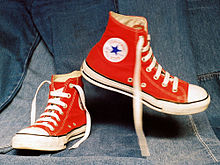 The Chuck Taylor All Star shoe has developed a number of nicknames over the years, such as: "Cons", "Connies", "Convics", "Convos", "Verses", "Chuckers", "Chucks", "Converse", "Chuckalos", "Chuckies", "Chuck Ts", or "Chucker Boots" or "Chuck Taylors" for the higher styles.[citation needed] For decades the Chuck Taylor All Star basketball shoe only came in black, with a white variant released in 1947. Under pressure from basketball teams Converse decided in 1966 to manufacture other colors. Different materials also began to be used, starting in the 1970s, including leather, suede and vinyl, and even hemp, rather than just canvas. Besides high-tops, low-cuts and later knee-high versions were produced. 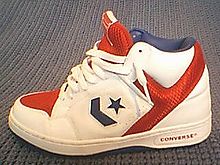 The Weapon, manufactured in many different color schemes

In 1986, Converse released "The Weapon" basketball shoe. Manufactured in many color schemes to match the kit colors of basketball teams, it has been available in both high-top and low cut varieties. The unique aspect of this shoe is the leather construction throughout, including the inside heel which is also heavily padded for comfort. Converse re-released "The Weapon" classic (which Kobe Bryant wore at least three times in 2002 and Andre Miller wore numerous times in 2002 from mid August to early September) several times from 2001-2003, "The Loaded Weapon" in 2003, "The Weapon 86" in 2008, and "The Weapon EVO" in 2009.

The first endorsers of "The Weapon" were Larry Bird and Magic Johnson, who were prominently featured in a Converse commercial set in Bird's hometown of French Lick, Indiana in 1986. They were also worn by Axl Rose in the Guns N' Roses music video "Estranged". 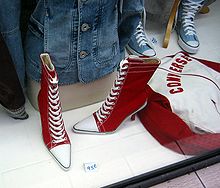 Three new designs were created for high tops, inspired by The Who. There is also a special collection released called 1Hund (red), where 15% of the profits are used to support HIV/AIDS relief. One hundred artists from around the world were chosen to create designs for the collection.