Donkey Kong 3 (ドンキーコング3, Donkī Kongu Surī?) is the third video game in the original Donkey Kong series by Nintendo. Released near simultaneously for the Family Computer and arcade, and later released in America on the Nintendo Entertainment System in 1986. The game was re-released on the Wii Virtual Console in North America on July 14, 2008 and in Europe on January 9, 2009. Although it is a sequel, this title is a radical departure in gameplay from previous titles.[2]

Stanley is a bugman. Donkey Kong has taken refuge in his greenhouse and it is now up to him to stop the ape from stirring up any more insects that will soon destroy his flowers. Stanley saves the flowers by spraying bug spray on Donkey Kong. 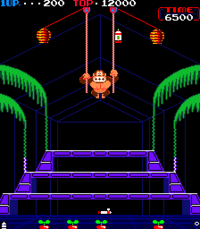 The game is a simplistic shooter which actually incorporates many ideas from an older game entitled Space Firebird and adapts them into a new setting, which consists of only three repeating rounds, requiring the player to defend flowers as the objective rather than have any specific long-term goal in mind. Throughout the levels are scattered various enemies: Buzzbees, beespies, queen bees (which shatter into deadly pieces when destroyed), creepy caterpillars, butterflies, beetles, moths, beebombs and vine eaters. Stanley,[3] who wears suspenders similar to the previous protagonist, Mario, must destroy the insects as they attempt to steal his flowers. Donkey Kong himself hangs from two vines at the top of the screen. Continuously using bug-spray on him will force him upwards and eventually to the top of the screen to complete the level. Killing all the bugs will also cause Donkey Kong to exit the screen and the game will go to next level. Typically, the vine grasped by Donkey Kong's left hand holds the super spray can, which will drop to the ground if the ape climbs high enough that his hand knocks it loose; this spray can forces Donkey Kong upwards at a much faster rate than the standard version, but it only lasts for a certain number of shots and only appears at the start of each "life".

Donkey Kong 3 predates most gaming magazines and Internet review sites, but since its release on the Wii's Virtual Console, some gamers have critiqued it. Most reviews did not rate it favourably, however. IGN gave it a 6.0 out of 10, negatively saying that it is a "radical departure" from the previous Donkey Kong games, calling it "repetitive."[4]

Donkey Kong 3 was not as successful as the previous two games, perhaps because its game structure is dramatically different. In the previous games, the player controlled a character who walked and jumped and climbed across various levels while avoiding obstacles, whereas this game is more of a fixed shooter.

A Multi-Screen Game & Watch title, which is similar to Donkey Kong 3, is entitled Greenhouse. There is even a VS. Series Game & Watch version of the arcade game, but with different gameplay. In this version, player one controls Stanley the Bugman and computer player (or player two) controls Donkey Kong in a duel against each other using exterminating spray cans to move the bees to the other side of them to make the bees sting their opponents. Players can only hold up to three amounts of spraying liquid in their spray cans. On one player mode, the higher player one as Stanley scores, the faster the spraying liquid on the side of computer player as Donkey Kong drops.