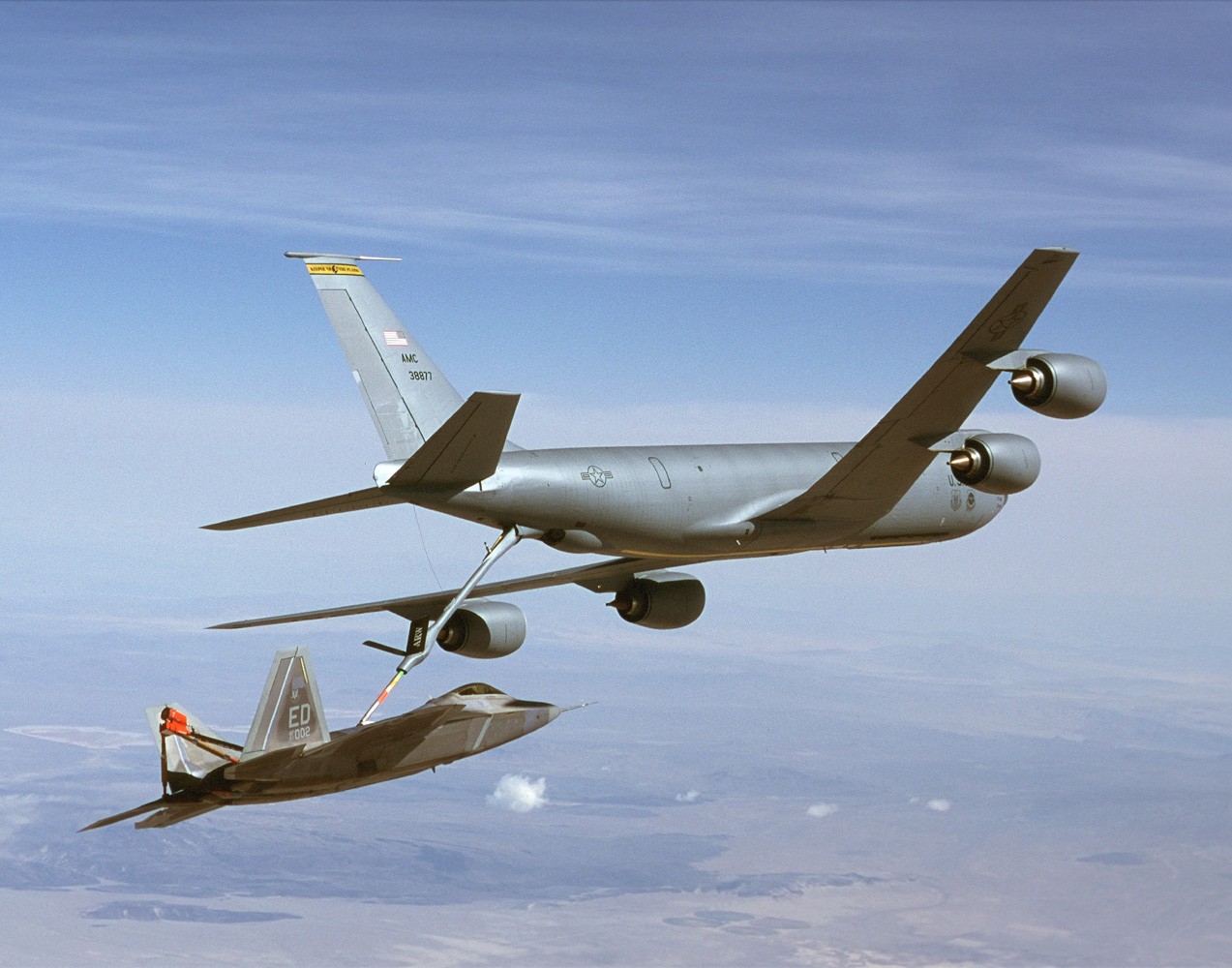 The KC-135 is derived from the original jet transport "proof of concept" demonstrator, the (commonly called the "Dash-80"). As such, it has a narrower and is shorter than the Boeing 707 jetliner. Boeing gave the tanker the designation of Model 717. [ [http://www.boeing.com/news/frontiers/archive/2006/july/i_history.pdf "Historical Perspective, Start of a PROUD MISSION"] , "Boeing Frontiers", July 2006.]

Developed in the late 1950s, the basic airframe is characterized by swept wings and tail, four underwing mounted engine pods, a mounted on the fuselage near the bottom of the with positive on the two horizontal planes and a hi-frequency radio antenna which protrudes forward from the top of the vertical fin or stabilizer. These basic features make it strongly resemble the commercial Boeing 707 and 720 aircraft, although it is actually a different aircraft.

Boeing's 367-80 was the basic design for the commercial passenger aircraft as well as the KC-135A Stratotanker. In 1954 the USAF's ordered the first 29 of its future fleet of 732. The first aircraft flew in August 1956 and the initial production Stratotanker was delivered to , , in June 1957. The last KC-135 was delivered to the Air Force in 1965.

Four engines, mounted under 35-degree swept wings, power the KC-135 to takeoffs at gross weights up to 322,500 pounds (146,300 kg). Nearly all internal fuel can be pumped through the tanker's flying boom, the KC-135's primary fuel transfer method. A special shuttlecock-shaped drogue, attached to and trailing behind the flying boom, may be used to refuel aircraft fitted with probes. A boom operator stationed in the rear of the aircraft controls the boom while lying prone. A cargo deck above the refueling system can hold a mixed load of passengers and cargo. Depending on fuel storage configuration, the KC-135 can carry up to 83,000 pounds (37,600 kg) of cargo.

The KC-135Q was the variant modified to carry the fuel necessary for the Blackbird, segregating the JP-7 from the KC-135's own fuel supply (the body tanks carrying JP-7, and the wing tanks carrying JP-4). When the KC-135Q model received the CFM-56 engines, it was redesignated the KC-135T model, which was capable of separating the main body tanks from the wing tanks where the KC-135 draws its engine fuel. The only external difference between a KC-135R and a KC-135T is the presence of a clear window on the underside of the empennage of the KC-135T where a remote controlled searchlight is mounted.

Eight KC-135R aircraft are receiver-capable tankers, commonly referred to as KC-135R(RT). All eight aircraft are with the 22nd Air Refueling Wing at McConnell AFB, KS as of 1994. [Hopkins, pp. 71-72.] They are primarily used for force extension and Special Operations missions, and are crewed by highly qualified receiver capable crews. If not used for the receiver mission, these aircraft can be flown just like any other KC-135R.

In order to expand the KC-135's capabilities and improve its reliability, the aircraft has undergone a number of upgrades. Among these was the Pacer-CRAG program (CRAG="Compass, Radar And GPS") which ran from 1999 to 2002 and modified all the aircraft in the inventory to eliminate the Navigator position from the flight crew. The modifications were performed by at the Mojave Airport in . ["BAE SYSTEMS delivers final Pacer CRAG KC-135", "Aerotech News and Review", ] The latest block upgrade to the KC-135 is Block 40.3 which allows the KC-135 to comply with CNS/ATM.

All KC-135s were originally equipped with Pratt & Whitney J-57-P-59W turbojet engines which produced 10,000 lb of thrust dry, and approximately 13,000 pounds of thrust wet. Wet thrust was achieved through the use of water injection on takeoff. 670 gallons of water were injected into the engines over the course of two and a half minutes. This water allowed a second set of fuel injectors to activate without melting the turbine buckets. The water turned to steam, was ejected out the rear of the engine, and increased thrust. The water and the extra fuel increased the mass through the engine, increasing thrust. The engine ran a little hotter, increasing thrust as well as engine noise. The A-model on takeoff was a loud jet. In the 1980s the first modification program re-engined 157 Air Force Reserve (AFRES) and Air National Guard (ANG) tankers with the Pratt & Whitney TF-33-PW-102 engines from 707 airliners retired in the late 1970s and early 1980s. The re-engined tanker, designated the KC-135E, (now retired) was 14% more fuel efficient than the KC-135A and could offload 20% more fuel on long duration flights. (The difference is that the A-model weighed only 104,000 lb empty, while the E-model weighed 115,000 lb empty. But the maximum takeoff weight was not increased for the E-model. Therefore, the A-model could takeoff with 200,000 lb of fuel, while the E-model could only takeoff with 190,000 lb of fuel.) Only the KC-135E aircraft were equipped with thrust-reversers for takeoff aborts and shorter landing roll-outs.

The second modification program re-engined 500 with new CFM International CFM56 (F-108 for the military designation) engines produced by General Electric and Snecma. The re-engined tanker, designated either the KC-135R or KC-135T, can offload up to 50% more fuel (on a long duration sortie), is 25% more fuel efficient, costs 25% less to operate and is 96% quieter than the KC-135A.

The KC-135R's operational range is 60% greater than the KC-135E for comparable fuel offloads, providing a wider range of basing options.

No longer in consideration, upgrading the remaining KC-135E into KC-135R would have cost about three billion dollars, about 24 million dollars per aircraft. According to Air Force data, the KC-135 fleet had a total operation and support cost in fiscal year 2001 of about $2.2 billion. The older E modelaircraft averaged total costs of about $4.6 million per aircraft, while the R models averaged about $3.7 million per aircraft. Those costs include personnel, fuel, maintenance, modifications, and spare parts. [http://www.gao.gov/new.items/d03938t.pdf]

Besides its primary role as an inflight aircraft refueler, the KC-135, designated NKC-135, has assisted in several research projects at the at , California. One such project occurred between 1979 and 1980 when special wingtip "winglets", developed by of the , were tested at Dryden, using an NKC-135A tanker loaned to NASA by the Air Force. Winglets are small, nearly vertical fins installed on an aircraft's wing tips. The results of the research showed that drag was reduced and range could be increased by as much as 7 percent at cruise speeds. [ [http://www1.dfrc.nasa.gov/Gallery/photo/KC-135/HTML/index.html KC-135 Aircraft Photo Gallery Contact Sheet] ] [ [http://www.clubhyper.com/reference/c135jh_2.htm C-135 Variants - Part 2, by Jennings Heilig] ] Winglets are now being incorporated into most new commercial and military transport jets, as well as business aviation jets.

A number of KC-135A and KC-135B aircraft have been modified to EC-135 configuration for use in several different roles.

In Southeast Asia, the KC-135 Stratotankers ability as a force multiplier truly came to the fore. Midair refueling brought far-flung bombing targets within reach, and allowed fighter missions to spend hours at the front, rather than just a few minutes, due to their limited fuel reserves.

(AMC) manages more than 481 Stratotankers, of which the Air Force Reserve and Air National Guard fly 292 in support of AMC's mission as on April 2008.

The Air Force projects that E and R models have lifetime flying hour limits of 36,000 and 39,000 hours, respectively. According to the Air Force, only a few KC-135s would reach these limits before 2040, but at that time some of the aircraft would be about 80 years old. The Air Force estimates that their current fleet of KC-135s have between 12,000 to 14,000 flying hours on them-only 33 percent of the lifetime flying hour limit. [ [http://www.globalsecurity.org/military/systems/aircraft/kc-135e.htm KC-135E ] ] Nevertheless these aircraft are over 40 years old and maintenance costs are increasing, with airframe corrosion being the worst problem.

Initially the first batch of replacement planes was to be an air tanker version of the , leased from . In 2003, this was changed to contract where the Air Force would purchase 80 KC-767 aircraft and lease 20 more. [ [http://www.afa.org/magazine/feb2004/0204tanker.asp Tanker Twilight Zone] , Air Force magazine, February 2004, Vol. 87, No. 2.] In December 2003, the Pentagon froze the contract and in January 2006, the KC-767 contract was canceled. This followed public revelations of corruption in how the contract was awarded, as well as controversy regarding the original leasing rather than outright purchase agreement. This was also designed to be a cost-cutting measure and is part of a larger reorganization and redefinition of the Air Force's mission that includes the retirement of the E-4B fleet, the cancellation of the -based program, as well as the elimination of all but 58 es. Former Secretary of Defense Rumsfeld stated that this move will in no way impair the Air Force's ability to deliver the mission of the KC-767, which will be accomplished by continuing upgrades to the KC-135 and fleet.

In January 2007, the U.S. Air Force formally launched the program with a (RFP). KC-X is first phase of three acquisition programs to replace the KC-135 fleet. [ [http://www.defenselink.mil/Releases/Release.aspx?ReleaseID=10463 "Air Force Posts Request for Proposals for Tankers"] , US DoD, , .] On , the US Defense Department announced that it had selected the / "KC-30" (to be designated the KC-45A) over the Boeing KC-767. [ [http://www.af.mil/news/story.asp?id=123088392 "Tanker contract award announced"] , US Air Force, , .] On , , the US sustained Boeing's protest of the selection of the Northrop Grumman/EADS's tanker.