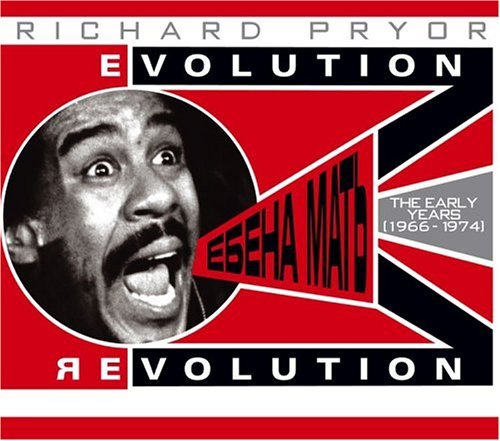 
"Evolution/Revolution: The Early Years (1966-1974)" is a two-CD compilation of live stand-up comedy recordings by and , that predate his 1974 mainstream breakthrough album "".

The album was primarily compiled from tapes recorded by between 1966 and 1974. By 1968, Pryor had only recorded and released one album up to that point, the eponymous debut that was released by Dove/Reprise and featured a much milder Pryor.

In 1970 Pryor signed with to record and release his second album, the underground classic "". After its release in , Pryor sought out a larger label for his next album but didn't find it until 1974 when he signed with , who originally released "". Laff promptly sued Pryor, but a settlement allowed Pryor to become a free agent in exchange for allowing Laff to release all previously unissued material with them. After Pryor signed with in 1975, where he kicked his recording career into high gear with the release of "" and the reissue of "", Laff began rushing out badly packaged and mastered albums to piggyback Pryor's Warner Bros. releases.

Between 1971 and 1983, Laff released twelve albums worth of Pryor material, but spread out the contents amongst twenty different albums, including releases that either repackaged older albums with new titles and covers, or albums that paired Pryor tracks from "Craps" with previously issued material from other comedians who had recorded for Laff (including ).

In 2002, Pryor and his wife/manager won the legal rights all of the Laff material with Pryor's name on it -- over 40 hours of unedited reel-to-reel tapes -- containing recordings both issued and unissued. Jennifer Lee Pryor then gave and , the men who had previously compiled the "" nine-CD box set and its companion 2-CD "Anthology" for Rhino, access to all of the tapes.

Disc 1 contains what is said to be the best of the material Laff had released on record after 1974, while Disc 2 contains the entire "Craps" album plus other unreleased material, including the unedited version of Pryor's entire "" monologue.

The album packaging also contains liner notes from journalist , who had interviewed Pryor several times, including around the time of "That Nigger's Crazy"'s release and after Pryor had his 1980 free-basing accident.