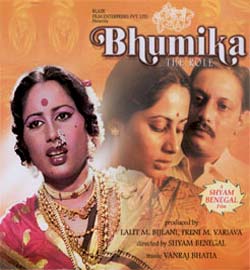 This film is broadly based on the memoirs of the well-known Marathi Stage and screen actress of the 1940s, 'Hansa Wadkar' who led a flamboyant and unconventional life and focus at an individual's search for identity and self-fulfillment [ [http://www.metroactive.com/metro-santa-cruz/09.05.07/movies-shyambenegal.html Shyam Benegal Retrospective, 2007] ] .

gave the strong performance of transforming herself in its course from a vivacious teenage girl to a wiser but deeply wounded middle-aged woman.

"Bhumika" tells the life story of a actress, Usha (),who is the granddaughter of a famous female singer of the old tradition. Usha's mother married to an abusive and alcoholic brahman.Following his early death, and over her mother’s objections, Usha is taken to Bombay by family hanger-on Keshav Darvi () to successfully audition as a singer in a Bombay studio: the first step in a process, watched approvingly by her doting grandmother and with horror by her mother, that will eventually carry her to on-camera adolescent stardom, and to an ill-starred love marriage with Keshav. Usha’s motives for stubbornly pursuing this relationship (culminating in a pre-marital pregnancy) with the unattractive and much older Keshav—who appears to have lusted after her since childhood—are not spelled out. Presumably she feels indebted to him for his loyalty to her family (of which he frequently reminds her) and for her own worldly success; she is also a headstrong girl who clearly enjoys her acting career and is bent on challenging her uptight mother (who opposes the match because of Keshav’s non-brahman status, just as she opposes the cinema itself on the grounds of its supposed disrespectability).

Once the two are wed, Usha is shocked to find Keshav continuing to act as her “business manager,” arranging starring roles for her opposite hunky heartthrob Rajan (), who is himself in (unrequited) love with her. Since Keshav’s other business ventures are unsuccessful, the family remains entirely dependent on Usha’s earnings—a fact that Keshav clearly resents. He thus becomes both a jealous husband with a fragile ego and nasty temper, as well as (in effect) a greedy pimp who compels his wife to take risqué work despite her dislike of her costar and her protests that she “only wants to be a housewife” now that their daughter has been born. Not surprisingly, the relationship becomes increasingly poisoned, particularly by Keshav’s assumption (fed by star-magazine gossip) that she is in fact having an affair with Rajan. Verbally and physically abused by her husband and periodically obliged to live in a hotel, separated from her daughter and mother, the desperately-unhappy actress eventually does instigate two unsatisfying liaisons—with the nihilistic and self-centered director Sunil Verma (), with whom she plots a double-suicide (which he foils), and then with the wealthy businessman Vinayak Kale (), who keeps her as a pampered mistress on his palatial estate. Here Usha briefly finds a kind of “respectability” as a de facto second wife, earning a measure of love and admiration from Kale’s mother, son, and bedridden first wife—but (as she learns one day when she tries to take the boy to a nearby fair) at the cost of even the most rudimentary freedom. Unable to abide by Kale’s hypocritical domestic rules, she finds her only hope of escape to lie in the intervention of the hated Keshav, who promptly brings her back to a Bombay festooned with billboards of her own face, and to the same drab hotel and lonely prospects. As Kale’s bitter wife remarks to Usha as the latter prepares to leave, “The beds change, the kitchens change. Men’s masks change, but men don’t change.” [http://www.uiowa.edu/~incinema/Bhumika.html]

This film remains an iconic film in the art house/ off-beat film tradition of Indian cinema and is still as relevant today as it was when it was first released in 1977 and the period that it depicts, ranging from the 30s to the late 50s. The film is inspired from and is a fictional recreation of the autobiography of the famous Hindi and Marathi screen actress of the 1930s, 40s and 50s, Hansa Wadkar.This film is a very complex film in terms of its structure and the plethora of themes and issues that it tackles, but this in no way distracts the viewers from enjoying the film as it unfolds to us the story of Usha, aka Urvashi in a seamless blend of past and present.

’s essaying of the role is amongst the best performances in not just Indian cinema but world cinema and rightly fetched her the National Award in that year. Within the film, her depiction of different roles in the films that she performs in, not only traces the evolution of acting styles in Hindi cinema over three decades, but also demonstrates her remarkable histrionic ability.