The Toronto Fire Services is part of the Emergency Services that respond to 911 calls in the City of Toronto, Ontario, Canada.

The Toronto Fire Services is responsible for responding to fires, rescue and assisting with medical situations within the City of Toronto. It was created in 1998 from the merger of the former fire departments of the original City of Toronto, East York, Etobicoke, North York, Scarborough and York. It is the largest fire department in Canada (ahead of Montreal, Vancouver and Ottawa) and the 4th largest city fire department in North America behind New York City, Chicago and Los Angeles. 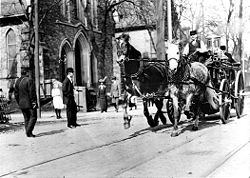 Fire services in Toronto began in 1874 in the former City of Toronto, and still consisted of volunteer fire companies. Prior to 1874, fire services were composed of poorly trained volunteer companies in the city. The first company was created in 1826 and hook and ladder in 1831. Most were able bodied men who were trained to operate pumps to draw water from the lake.

The city's poor fire fighting services were highlighted by the Great Toronto Fire in 1849 and again in 1904. The latter fire which destroyed much of Bay Street from The Esplande West to Melinda Street, the Fire Department in Toronto became a critical city service and has evolved into the professional service that exists today.

As of April 2009, the departments and commissioners were replaced by divisions under the City Manager (and Deputy Managers), so the TFS is now referred to as the Toronto Fire Services Division[citation needed] 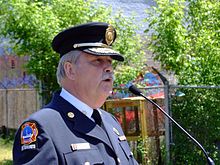 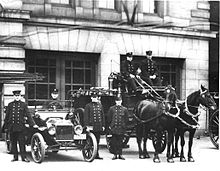 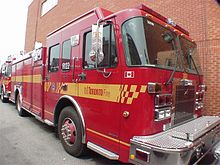 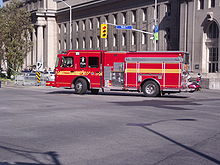 Toronto Fire Department began using motorized vehicles after 1910. Before that, the TFD and previous fire companies used horse drawn engines and ladders. Prior to the 1970s, the TFD had open air vehicles (driver cab not covered and mostly aerial trucks), but since then both the TFD and TFS use full covered vehicles. Prior to the 1950s, TFD used tiller-ladder trucks and since have reverted to smaller aerial units that can operate in narrow streets in Toronto.

The TFS inherited all the vehicles of the fire departments prior to amalgamation. The current strength of TFS consists of 179 vehicles. Since amalgamation, apparatus numbers are numbered by a letter and 3 digits. The digits refer to station number and the letter refers to type of apparatus, for example T333 is the tower located Station 333. Spare apparatus are numbered with four digits, beginning with a 5 (eg. P5227). Occasionally secondary units with the same numeric designation are given a letter as a suffix ex. Pumper 335 (P335) and Pumper 335B (P335B).

A list of types of vehicles used by the TFS : (prefix letter in brackets with x's as placeholders)

While not part of the fleet, Box 12 and Support 7 are canteen trucks run by volunteers at the Greater Toronto Multiple Alarm Association), and are present at large emergencies to provide food and beverages for Toronto firefighters. Formed in 1975, the GTMAA vehicles are painted with TFS scheme, but not the logo (uses GTMAA patch).

In addition, there are various Hazardous Materials Support trucks and a Trench Rescue Support truck that respond to specialized calls. These trucks are unmanned, and are only used by trained personnel when a specialized call is dispatched. TFS also has a fleet of various mechanical support trucks. Smaller compact cars bearing the TFS colours and logo are driven by fire prevention officers and other commanding officers.

Toronto Fire will also acquire use of the Long Range Acoustic Device. It was one of three purchased by the Toronto Police Service for use during the G20 summit in 2010 (1 for Marine Unit, 2 for Public Safety Unit).[3]

Prior to amalgamation, the Scarborough Fire Department had their fleet painted yellow. In the years following amalgamation the markings on the fire trucks were a patchwork of the various schemes used by the former boroughs. All had "Toronto" decaled or painted where the former bourough's name used to be and the new Toronto Fire crest was added with the new numbering scheme. Over the past 12 years - post amalgamation - the majority of the older vehicles have either been retired or repainted to match the new scheme: fire engine red with yellow reflective trim and markings.

TFS also provides fire fighting and rescue operations in the water. The TFS operates two fire boats, the William Lyon Mackenzie and Sora. Both are stationed at station 334.

At the Toronto City Centre Airport, TFS may be called to assist the fire service at the airport.

After the September 11, 2001 attacks, the TFS formed a search and rescue unit called the Heavy Urban Search and Rescue or HUSAR. HUSAR responds to collapsed buildings and other incidents beyond the reach of regular fire fighters. 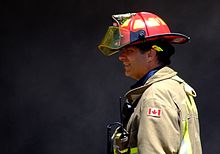 Other members of the Toronto's Emergency Services structure consists of:

Other agencies with historic ties to the TFD and TFS: