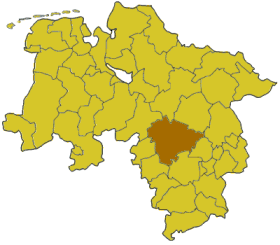 Hanover (officially in German: "Region Hannover") is a district (county) in , . It is bounded by (from the north and clockwise) the districts of , Celle, Gifhorn, Peine, Hildesheim, , and Nienburg.

The District of Hanover has a unique legal status among the districts of Lower Saxony. It includes the City of , the state capital, which has the same privileges as a city that is not part of a district. As a consequence, the District is much larger in population than any other district of the state. Its administrative body is the "Regionsparlament" ("engl.:" "regional parliament"), headed by the "Regionspräsident" or "region president" ( (SPD) since 2006). Both the members of the "Regionsparlament" and the "Regionspräsident" are elected once every five years in local elections.

The City of Hanover was not part of the district until 2001, when the old "Hanover District" and the city (then known officially as "Kreisfreie Stadt Hannover", which means "District Free city of Hanover") were merged in order to form the new "Region Hannover" district (not to be confused with the former "Regierungsbezirk Hannover").

During , Hanover was the Headquarters (Hauptquartier) of the Military District (Wehrkreis) XI, which was responsible for , , and part of Hanover. It was also the Garrison Town for the 71st Infanterie Division.

The district surrounds the City of Hanover and includes the outskirts of its metropolitan area. The river enters the district in the south, runs through Hanover and leaves to the north. In the northwest is the , a lake with an area of 32 km².

In Hanover some famous Sport Clubs are located. The most famous are the () and ().