Sengbe Pieh (c. 1814 – c. 1879),[1] later known as Joseph Cinqué, was a West African man of the Mende people and was the most prominent defendant in the Amistad case, in which it was found that he and 51 others had been victims of the illegal Atlantic slave trade.

Cinqué was born c. 1814 in what is now Sierra Leone, although his exact date of birth remains unknown. He was a married rice farmer with three children when he was captured illegally by African slave traders in 1839 and imprisoned on the Portuguese slave ship Tecora, in violation of treaties prohibiting international slave trade. Cinqué was taken to Cuba, where he was sold with 110 others to Spaniards José Ruiz and Pedro Montez.

The Spaniards transported the captives on the schooner Amistad, with the intention of selling them as slaves in Cuba for work at sugar plantations. On June 30, Cinqué led a revolt, killing the captain and the cook of the ship; two slaves also died, and two sailors escaped. The Africans took prisoner Ruiz and Montez, the merchants who had made the purchase, and demanded that they direct the ship back to Sierra Leone. Instead, at night, they directed the navigator in the opposite direction, towards the Americas, in the hope of attracting the attention of one of their fellow Spaniards who would save their ship and regain control. However, the ship vacillated between the coasts of the United States and Africa. After about two months, Amistad reached United States waters near Long Island. Members of the USS Washington boarded the vessel. When they discovered what had happened (according to the Spaniards), they charged the Africans with mutiny and murder, and took them to New Haven, Connecticut to await trial. 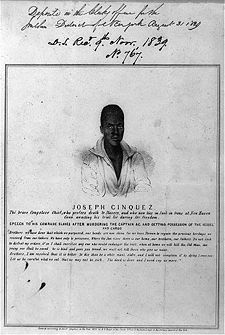 The two Spaniards claimed that the Africans were already slaves in Cuba at the time of their purchase and were therefore legal property. Interpreters from Mende to English were found, who enabled the Africans to tell their story to attorneys and the court. Cinqué served as the group's informal representative.

After the case was ruled in favor of the Africans in the district and circuit courts, the case was appealed to the Supreme Court of the United States. In March 1840, the Supreme Court ruled that the Africans mutinied to regain their freedom after being kidnapped and sold illegally. The advocacy of former U.S. President John Quincy Adams, together with Roger Sherman Baldwin, was critical to the Africans' defense. The court ordered the Africans freed and returned to Africa, if they wished. This decision was against the protests of President Martin Van Buren who worried about relations with Spain and implications for domestic slavery.

Cinqué and the other Africans reached their homeland in 1842. In Sierra Leone, Cinqué was faced with civil war. He and his company maintained contact with the local mission for a while, but Cinqué left to trade along the coast. Little is known of his later life, and rumors circulated. Some maintained that he had moved to Jamaica.[2] Others held that he had become a merchant or a chief, perhaps trading in slaves himself.[3] The latter charge derived from oral accounts from Africa cited by the twentieth-century author William A. Owens, who claimed that he had seen letters from AMA missionaries suggesting Cinqué was a slave trader. Although some of the Africans associated with the Amistad probably did engage in the slave trade upon their return, most historians agree that the allegations of Cinqué's involvement are false.[4] A dying Cinqué was said to have returned to the mission in 1879, where he requested and received a Christian burial.[5]

Other sources and further reading