/mændʒiˈoʊni/; born November 29, 1940) is an American flugelhorn player and composer who achieved international success in 1977 with his jazz-pop single, "Feels So Good." Mangione has released more than thirty albums since 1960.[1]

Born and raised in Rochester, New York, Mangione and his pianist brother Gap led the Jazz Brothers group which recorded three albums for Riverside Records. He attended the Eastman School of Music from 1958 to 1963, and afterwards joined Art Blakey's Jazz Messengers, for which he filled the trumpet seat, previously held by greats such as Clifford Brown, Kenny Dorham, Bill Hardman, and Lee Morgan.[2]

In the late 1960s, Mangione was a member of the band The National Gallery, which in 1968 released the album Performing Musical Interpretations of the Paintings of Paul Klee.[3] Mangione served as director of the Eastman jazz ensemble from 1968 to 1972, and in 1970, he returned to recording with the album Friends and Love, recorded in concert with the Rochester Philharmonic Orchestra and numerous guest performers.[4]

Mangione's quartet with saxophonist Gerry Niewood was a popular concert and recording act throughout the 1970s. "Bellavia," recorded during this collaboration, won Mangione his first Grammy Award in 1977 in the category Best Instrumental Composition.[5]

Mangione's composition "Chase the Clouds Away" was used at the 1976 Summer Olympics, held in Montreal, Quebec, with a later composition, "Give It All You Got," being used as the theme to the 1980 Winter Olympic Games, held in Lake Placid, New York. He performed it live at the closing ceremonies, which were televised globally.[6] In 1978 Mangione composed the soundtrack for the film "The Children of Sanchez" starring Anthony Quinn. This album won him his second Grammy, in the category Best Pop Instrumental performance in 1979 and the title song, almost 15 minutes long in full version and featuring one of the most recognizable wind section themes, has not lost its popularity to this day.

In addition to his quartet with Niewood, Mangione also had much success with his later-‘70s ensemble, including Mangione on flugelhorn and keyboard, Chris Vadala on saxophones and flutes, Grant Geissman on guitars, Charles Meeks on bass and James Bradley, Jr. on drums. This version of Mangione’s band recorded and toured behind the hit studio albums “Feels So Good” and “Fun and Games,” as well as the “Children of Sanchez” film soundtrack recordings, and were some of the musicians that played on various songs as part of Mangione's 1980 “Tarantella" benefit concert.

The band was also featured, along with a 70-piece orchestra, on the live album “An Evening of Magic,” which was recorded at the Hollywood Bowl on July 16, 1978, at the height of Mangione’s success from “Feels So Good.” Performances of material new and old included versions of “Main Squeeze,” “Hill Where the Lord Hides” and “Chase the Clouds Away.” Mangione opened and closed the show with “Feels So Good” and its “Reprise” version. “B’Bye” featured a string arrangement from Bill Reichenbach. The horns were arranged by frequent collaborator Jeff Tyzik, who also played trumpet in the horn section that night. Mangione also played material from the just-released “Children of Sanchez” soundtrack album, which made its West Coast concert debut.

The liner notes from the album describe the frenzy in which the performance was put together. Unable to set up on stage the day before (The Los Angeles Philharmonic played the “1812 Overture” on July 15), Mangione and his crew had only the day of show to set up lights, sound and recording gear. He had only nine hours the day before to rehearse at A&M studios with the orchestra's musicians and was never able to run through the entire set list once in its entirety. He and the band stayed at a hotel up the street from the Bowl to make sure they wouldn't miss the performance due to snarled traffic pouring in as showtime neared.

Nevertheless, the show went off without a hitch.

In December 1980, Mangione held a benefit concert in the American Hotel Ballroom in Rochester to benefit the victims of an earthquake in Italy. The nine-hour concert included jazz luminaries such as Chick Corea, Steve Gadd and Dizzy Gillespie, among a host of other session and concert greats. Soon thereafter, A&M released “Tarantella,” named for the Italian traditional dance, a vinyl album of some of the concert’s exceptional moments, which has yet to resurface on CD.

A 1980 issue of Current Biography called "Feels So Good" the most recognized tune since "Michelle" by The Beatles. Recently, smooth jazz stations throughout the United States have recognized Mangione's "Feels So Good" as their all-time number one song.[7] He raised over $50,000 for St. John's Nursing Home at his 60th Birthday Bash Concert, held at Rochester's Eastman Theatre and played a few bars of "Feels So Good.[8]

Chuck Mangione's relatives include his uncle Jerre Mangione (Mar. 20, 1909 - Aug. 16, 1998) who was an American writer and scholar of the Italian-American experience. His brother is Gaspare (Gap) Mangione, with whom he played jazz in Rochester, New York. They recorded as the Jazz Brothers. Later, and into this decade, they played, recorded and toured together, mainly in Chuck's large, orchestral concerts. Chuck has also made guest appearances with Gap's big band. 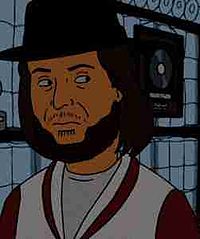 Chuck Mangione on King of the Hill

In addition to music, Chuck Mangione had a recurring voice-acting role on the animated television series King of the Hill. In it he portrays himself as a celebrity spokesman for Mega Lo Mart, although his animated form appears much younger than his current age, more closely resembling how he looked in the late 1970s. The first episode of King of the Hill featuring Mangione originally aired on February 16, 1997. The episode featured an original score specifically recorded for the occasion. He continued to appear in episodes, a total of ten more up until 2003.[9] In the context of the series, Chuck chafes under an oppressive spokesperson contract with Mega Lo Mart and eventually goes into hiding inside one of their own stores. After a long hiatus, the character of Chuck Mangione returned in a later episode titled "Lucky's Wedding Suit", in May 2007. A recurring joke is that whatever tune he plays on his flugelhorn inevitably shifts into "Feels So Good" after a few bars. The series finale in 2009 included Chuck Mangione one last time, playing the National Anthem which of course segued into "Feels So Good". After the Mega Lo Mart blows up, Chuck states during a group therapy session that "Every song I play now sounds like 'Feels So Good'." In homage to the series, Mangione's album Everything For Love contains a track entitled Peggy Hill.

In the Magnum, P.I. episode "Paradise Blues," Chuck Mangione portrays a fellow night club act along with TC's (Roger E. Mosley's) former girlfriend. Chuck performs two singles and has lines near the end of the show.

On July 4, 1983, Chuck Mangione was in attendance as the New York Yankees played the Boston Red Sox at Yankee Stadium. After playing the national anthem on the flugelhorn, Mangione, a Yankees fan, joined Phil Rizzuto and Bill White in the broadcast booth. Mangione gave his thoughts on the Yankee players and played a few bars of "Feels So Good."[citation needed] Yankee pitcher Dave Righetti threw a no-hitter, defeating the Red Sox 4-0.

Mangione's Feels So Good has also appeared in Family Guy.

Two members of the band, Gerry Niewood and Coleman Mellett, were among those killed when Continental Airlines Flight 3407 crashed into a Buffalo, New York, area house on February 12, 2009. In a statement Mangione said: "I'm in shock over the horrible, heartbreaking tragedy."[10]

Chuck Mangione's compositions include "Feels So Good", "Children of Sanchez", "Hide and Seek", "Hill Where the Lord Hides", "Fun and Games", "Give It All You Got", "Land of Make Believe", "Bellavia", "Main Squeeze", "Love Notes", "Steppin' Out", "I Never Missed Someone Before", "Maui-Waui", "Last Dance", "El Gato Triste", and "Chase the Clouds Away".