San-X (サンエックス, San Ekkusu?) is a Japanese company that specializes in the creation, production and marketing of goods featuring cute characters such as Tarepanda, Rilakkuma, Kogepan and Afro Ken. The characters are usually anthropomorphic representations of animals or inanimate objects; the character Tissue-san was modelled on an ordinary box of tissues. Each character has its own quirky traits. For example, Momobuta is a pig with a head shaped like a peach, who enjoys karaoke and painting her nails. San-X head designer and creator of Tarepanda, Hikaru Suemasa said in 1999: "It's not just being cute. There is something different - a relaxed look, powerless".[1]

San-X characters can be found on stationery sets and pencils, as small figurines, keychains and stuffed toys. They are sold as blind boxes, gashapon and in UFO catchers and other prize machines in Japan's arcades. There are also anime series, video games and children's books featuring the characters. 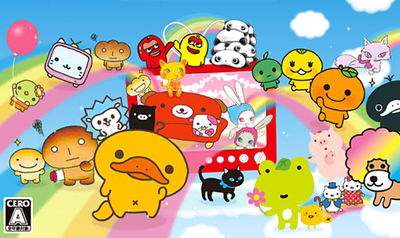 San-X was founded in April 1932 as a privately-owned business under the name Chida Handler. In October 1942, Chida Handler became a limited company. Chida Handler's name was changed to San-X in May 1973.[2] The name San-X derives from an earlier logo which was a row of three X characters. San is three in Japanese.

Before Tarepanda became a hit, most of San-X products did not rely on characters. They continue to sell products like stationery with scenic shots and illustrations. In 1987 San-X created Pinny-Mu, their biggest character until Tarepanda was created in 1995. After Tarepanda became a success in 1998 San-X turned into a full-scale character development and licensing company. In 2003 Rilakkuma was created and in 2005 Mamegoma, which was adapted to an anime series in 2009.

According to The New York Times, San-X is a smaller, nimbler company that is usurping the Sanrio corporation. The San-X characters Tarepanda and Rilakkuma have been described as "huge hits in Japan" that are rising in the Character Databank character popularity charts while Sanrio's Hello Kitty character has slumped in popularity, especially in Japan.[3] 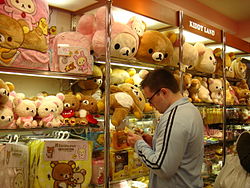 The Rilakkuma display at Kiddyland in Harajuku, Tokyo, Japan