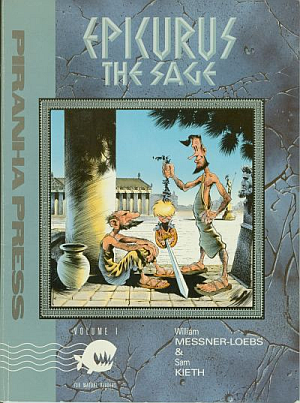 Epicurus the Sage was the name of a 2-issue written by , with art by . Each issue was bound in a format, and was 48 pages long, without advertisements. It was published by , the "alternative comics" imprint of .__FORCETOC__

The book mixes history, mythology, and humor to relate the teachings of Epicurus. The narrative tends to anachronistically show other vaguely contemporary writers and thinkers, such as (who died two centuries before the historical Epicurus was even born), as backwards, foolish, fascistic, or all three, while the philosophy of Epicurus is portrayed to be more tolerant and humanistic; it is pointed out more than once that Epicurus is one of the only ancient philosophers who would teach women.

Various notable personages, from both history and mythology (e.g. and ), appear as secondary characters.

The original run of the comic consisted of two issues:

In 2003, both books of the series were reprinted in a trade paperback (ISBN 1-40120-028-1) by Cliffhanger, an imprint of . This book featured a new painted cover by , a black and white "Epicurus" story from "Fast Forward" #3, and an all new 36-page Epicurus story by Kieth and Messner-Loebs.