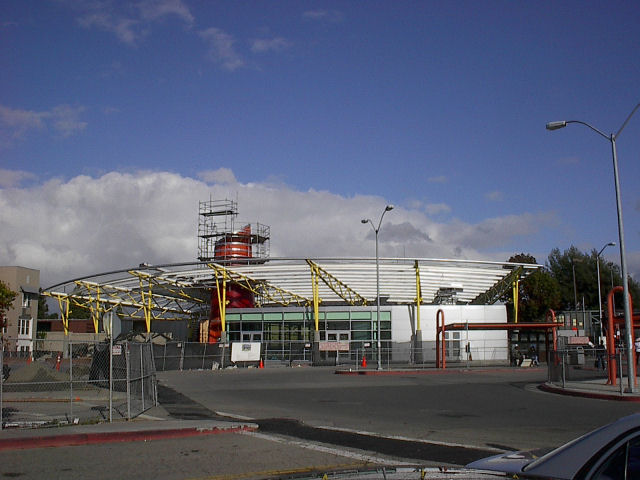 Richmond Station is an at-grade and station located in . Each system is served by an . The stops here, providing connections to BART. The , another Amtrak route, also has a stop at this station. The station is currently being completely rebuilt. The is adjacent; directly north of the station is a BART . Richmond serves as the northern terminus for the Richmond Line with the which operates Monday-Saturday during the daytime (although the line does not travel south of Daly City on Saturdays) and the which operates at all times during regular BART service. This station has been identified as a very important regional hub in the transportation network for metropolitan and state wide planning.

BART service at this station began on .

The station is served by two bus agencies. AC Transit provides a variety of local and regional service. Buses connect the station to various locations such as Contra Costa College, Hilltop Mall, El Cerrito del Norte BART Station, which is a regional bus hub with connecting services to the North Bay, and . Routes 70, 71, 72M, 74, and 76 provide a mixture or local intra-city service and also feeder service into the BART and Amtrak systems. They link to Richmond neighborhoods and neighboring communities of Marina Bay, Belding Woods, Point Richmond, Atchison Village, Hilltop, El Sobrante, El Cerrito, East Richmond, North Richmond, Rollingwood, and Pinole. Routes 376 and 800 both provide late night service. The former is a late night circulator combing the most popular portions of the local lines running until 2 AM while the 800 runs a route which emulates the BART's Richmond-Daly City line between Richmond and downtown San Francisco during the hours that BART is closed. It is the main route in the regional Bay Area network. Route 42 is a link between the Golden Gate Transit service area in Marin County and the AC Transit area in Contra Costa County, the line connects San Rafael Transit Center a major GGT hub in San Rafael with Richmond and El Cerrito del Norte BART stations.

A transit store opened at the station in August 2008, joining other major stations in the system.

On September 16, 2008 a man commited suicide by jumping in front of a San Francisco bound train at the station.