With the founding of the BSA in 1910, the first goal of the San Gabriel Valley scout leaders was to organize as new troops. Paid professionals, many of whom were YMCA leaders, were recruited to help start new Troops and spread the new scouting program. They were sent out into the San Gabriel Valley towns to organize new troops and recruit leaders. By March 1919, there were nine active troops with 190 boys in the SGV. The Pasadena Council (also known as the Pasadena District Council) of the Boy Scouts of America was organized March 3, 1919, with jurisdiction over Pasadena, Altadena and Lamanda Park.

A charter was granted by the BSA National Headquarters dated April 1, 1919 to the Pasadena District Council. Tallman Trask was hired to be the first Scout Executive. Trask had been a District Executive for the Los Angeles Council. He had also served as Los Angeles’ Camp Director. Prior to joining the BSA, Trask was an executive for the YMCA and had run several camps for them. By October 1, 1919, there were 15 active troops with 299 Scouts.

Trask Scout Reservation is in the City of Monrovia, Ca. in the foothills of the San Gabriel Mountains. It is located above the sawpit dam off of Monrovia Canyon Park.[12] Camp Trask offers, Cub Scout Programs, Family Camp programs and Boy Scout Programs on a year round basis. The Camp has a full size Fort used for many program activities, called Fort Rotary. The camp is in a riparian zone ecosystem. Canyon stream and the camp are shaded by deciduous trees, white alders and bigleaf maples, evergreen canyon and coast live oaks.

Holcomb Valley Scout Ranch was formerly part of Old Baldy Council. The Scout Ranch was turned over to the San Gabriel Valley Council in 2005. The Old Baldy Council took title to the property in 1965 from William Hitchcock. The Hitchcock Ranch is still part of the Holcomb Valley Scout Ranch.[17] Guy Reide, Old Baldy's Scout Executive(1949 to 1966) in 1965 had the vision and work with William Hitchcock to have the Ranch turned into a Scout Camp. Loren Baldwin became the first camp ranger and Holcomb Valley held its first Boy Scout summer resident camp in 1974. Holcomb Valley is named after William F. Holcomb,[18] who discovered gold there and staked a claim in May 1860 with his partner. Holcomb became known for his marksmanship. After 10 years of prospecting he still had no major success. As food sources were diminishing, some of the prospectors hired Holcomb to hunt for grizzly bear to provide food for the long winter months. While trailing a bear he found Holcomb Valley. Bonanza and many other western films and TV shows were shot in Holcomb Valley.[19][20] For a short time under Old Baldy Council the camp was called "Camp Lipscomb" after US Congressman Glenard P. Lipscomb.

Camp Cherry Valley is a summer camp on the leeward side of Catalina Island, California, operated by the San Gabriel Valley Council of the Boy Scouts of America. It is located two coves north of Two Harbors at Cherry Cove. The camp, valley and cove get their name from the catalina cherry trees native to the island.[21] It also offers non-Scouting programs on a year round basis.

Camp Cherry Valley has operated as a Boy Scout camp since the 1920's, but other groups use it as well. CIMI, the Catalina Island Marine Institute, runs a program from September through November, taking a winter break then recommencing February through May. The CIMI program caters to youth groups other than boy scouts. Being right on the Pacific ocean, the camp allows superb snorkling and scuba diving. During the summer the calm waters stay around seventy degrees Fahrenheit. Scouts sleep in two-person canvas tents set on wooden platforms located up the canyon under the cherry trees.

To reach the camp, Scouts take a two-hour chartered ferry across the channel, a 22-mile distance from San Pedro or Long Beach to Two Harbors and then hike 1.3 miles to the camp. The camp promotes itself to scouts with the Tribe of Torqua. The "Tribe" was instituted by Council Executive H. Benjamin "Skipper" Robinson as a special group of honor campers. The Tribe of Torqua remains strong to this day, with thousands of youngsters in its ranks.[22] 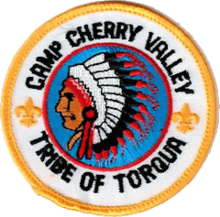 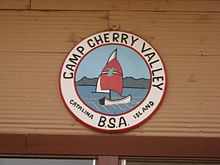 As of 2008, five main hikes were available for Scouts:

There is a small silver mine[23] located in the cove left from the time the western part of Catalina Island was full of such mines. The mine was shut down by orders from Abraham Lincoln, after he had got rumors the Confederate army may attack California to acquire gold and silver to fund their war efforts.[24] In 1864 Union Troops were put on the island to stop mining.[25]

Throughout the 1920s-1930’s, Scouts would travel via train from Pasadena to San Pedro, then take the Great White Steamer, SS Catalina, to Avalon. After arriving in Avalon, they would then travel up to Cherry Cove on the Betty-O, a Wrigley tour boat, now a Marina del Rey fishing boat.[26]

Cherry Valley opened in 1923. It was very primitive that first year. There was no pier so campers had to wade ashore or be shuttled from the Betty-O to shore via rowboats. Scouts ate at an “open air” Dining Hall and were plagued by yellow jackets. In 1947 scout now traveled directly from San Pedro to Cherry Cove on the H-10 Water taxi. They would continue to travel via water taxi until 1973.[27]

The original 1937 lighthouse was blown down in a storm in 1998. It was rebuilt in 2003 and christened "Thompson’s Light" in honor of Dr. Henry Thompson

The San Gabriel Valley Council's Order of the Arrow lodge is the Ta Tanka Lodge (#488).