Dorothy's childhood has been described as Dickensian.[6][7] The family lived as boarders in a crowded house.[6] The parents were dysfunctional and unhappy[8] and prone to sometimes violent fights;[6] they moved Dorothy amongst various schools,[3] and paid only sporadic attention to the children before divorcing in 1927.[4] The children were then sent on a train by themselves, unsupervised (Dorothy was eight, Isabelle younger), to live with their paternal grandparents in the Los Angeles suburb of Alhambra, California.[3][8][9] The sisters endured harsh treatment from their grandparents and Dorothy left home at age 14 at the height of the Great Depression, working as a $3-per-week housekeeper, cook, and nanny in San Gabriel, California.[6][8] Encouraged by her employer to read and go to school, Dorothy attended Alhambra High School, where she joined several clubs and benefited from two teachers.[6] After graduating from there in 1937,[10] she moved to Chicago for a failed reunion with her mother,[4][8] who by then had gotten married to Max Rosenberg.[11] Subsequently, she moved into her own apartment there and took office jobs to support herself.[3][4] She later said, "I’d hoped so hard that my mother would love me that I had to take the chance and find out. When she didn’t, I had nowhere else to go."[6] Hillary Clinton later attributed her interest in children's welfare to her mother's life as well as her belief that caring adults outside of family can fill a child's emotional voids.[6]

While applying for a job as a clerk typist at a textile company, she met traveling salesman Hugh Ellsworth Rodham,[4] eight years her senior, in 1937.[12] After a lengthy courtship, they married in early 1942.[4] She became a full-time homemaker, raising three children, Hillary, Hugh and Tony, in suburban Park Ridge, Illinois. She encouraged Hillary to have a love for learning and to pursue an education and a career, though she had never done so herself.[8] In contrast to her husband's staunch Republican views,[13] Dorothy Rodham was, as her daughter later wrote, "basically a Democrat, although she kept it quiet in Republican Park Ridge."[4]

In 1987, Rodham and her husband moved to Little Rock, Arkansas, to be closer to their daughter and granddaughter, Chelsea.[11] An excellent student as a youth, Rodham now took college courses in subjects such as psychology, logic, and child development, although she never graduated.[4][11] Her daughter later wrote, "I'm still amazed at how my mother emerged from her lonely early life as such an affectionate and levelheaded woman."[3] 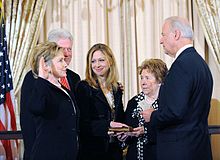 At Hillary Rodham Clinton's swearing in as U.S. Secretary of State in January 2009

Hugh Rodham died in 1993. Dorothy Rodham remained active but valued her privacy and almost never spoke to the media,[8] although she appeared on The Oprah Winfrey Show in 2004.[14] In 2006, she moved into the Clintons' large Whitehaven house in the Kalorama neighborhood of Washington, D.C.[8][14][15]

Starting in December 2007 she made a rare public appearance in Iowa and other early primary states to campaign for her daughter's presidential nomination bid.[3][16] She appeared at some events concerning women's issues and also appeared in a Clinton campaign television advertisement.[3][17]

Dorothy Rodham died on November 1, 2011, in Washington, D.C., with Secretary Clinton cancelling a foreign trip in order to be by her side.[3]