For the biological process, see decomposition.

The reaction is usually endothermic as heat is required to break chemical bonds in the compound undergoing decomposition. If decomposition is sufficiently exothermic, a positive feedback loop is created producing thermal runaway and possibly an explosion.

The reaction is used to make quick lime, which when hydrated becomes slaked lime and is used a building material. 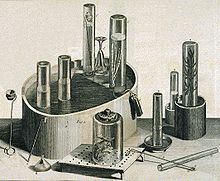 Equipment used by Priestley in his experiments on gases