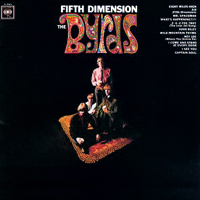 "Eight Miles High," with its fusion of Coltrane-influenced attack in the guitar solo and structure from , was pivotal in transmuting into the new form of psychedelia. Guitarist had laboriously incorporated Coltrane's modal style of playing into his guitar technique, a startling accomplishment. With or without its innovative qualities, many radio stations refused to play the record, believing the title a reference to drugs, although the lyrics in actuality pertained to an approximation of airliner cruising altitude and the group's visit to while on tour.

Written mostly by , after an evening of carousing with of the in London, the song was Clark's last hurrah with the Byrds, as he left the band shortly after recording this single and its , "Why," its Indian influences even more prominent. The official story on Clark's departure has always been fear of flying, although other reasons have been brought forward at various times. The band had also split from producer , who had guided them through their two classic folk-rock albums of 1965, Columbia staff producer being assigned in lieu of any other preference by the band for this album.

Given these truncations, the album contained four covers and two instrumentals as the rest of the band scrambled to compensate for the loss of their main songwriter. Interestingly, however, the album contained fewer covers than either of their Clark-era albums did, as well as no songs by Bob Dylan, whose songs had, along with Clark's, dominated earlier Byrds releases. With no Dylan covers and no Clark contributions beyond "Eight Miles High," McGuinn and stepped into the breach. McGuinn penned the other two singles and Crosby initiating his penchant for abstract songs asking irresoluble questions with "What's Happening?!?!," a trait continued through his career with Crosby, Stills & Nash and on his own. The two songwriters also collaborated on the jazzy "I See You," which included another example of rather abstract lyrics. All four members are credited on the instrumental "Captain Soul," which even featured Clark returning to blast some .

As for the covers, the song "" would enjoy a brief vogue in versions by Love, the , and as the premiere single by . The two traditional tunes, "John Riley" and "" received overdubs of somewhat muddily recorded string sections, corrected to an extent with the edition of 1996.

The result was a highly influential album, with the jarring raga-esque sensibilities and jazz influences very different from the band's previous output, and a testament to the rapidity with which pop music evolved in the mid-1960s.

"Fifth Dimension" was remixed and remastered at 20- resolution as part of the Columbia/Legacy Byrds series, reissued in an expanded form on , with six bonus tracks, including the b-side "Why" and the early versions of it and "Eight Miles High" recorded at studios on . The final track extends to include a hidden interview for radio stations, formatted with gaps between the answers of McGuinn and Crosby, whereby the local would insert himself reading stock questions sent along with their pre-recorded responses.