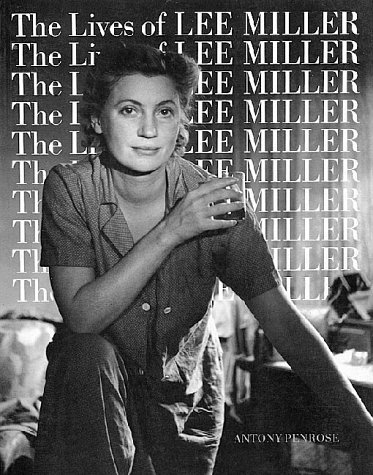 Elizabeth 'Lee' Miller, Lady Penrose ( - ) was an American photographer. Born in Poughkeepsie, in 1907, she was a successful in in the 1920s before going to where she became an established fashion and fine art photographer. During the Second World War, she became an acclaimed war correspondent for Vogue magazine covering events such as the London Blitz, the liberation of Paris, and the concentration camps at Buchenwald and Dachau.

Elizabeth Miller was born on April 23, 1907 in Poughkeepsie, New York. Her parents were Theodore and Florence Miller (née MacDonald). Her father was of German descent, and her mother a Canadian of Scottish and Irish descent. She had a younger brother named Erik, and older brother named John. Theodore always favored Elizabeth, and he often used her as a model for his amateur photography. When Elizabeth was seven years old, she was d while staying with a family friend in Brooklyn. Soon after, it was realized that Elizabeth had contracted gonorrhea. [Carolyn Burke. Lee Miller: A life. Alfred A. Knopf, 2005]

Her father, Theodore Miller, an engineer, inventor and businessman, introduced Lee and her brothers, John and Erik, to photography from an early age. She was his model--with many stereoscopic photographs taken of a teenage Lee in the nude--and he also showed her technical aspects of the art.

In 1929 she traveled to Paris with the intention of apprenticing herself to the surrealist artist and photographer . Although, at first, he insisted that he did not take students, Miller soon became his photographic assistant, as well as his lover and muse. While she was in Paris, she began her own photographic studio, often taking over Man Ray's fashion assignments to enable him to concentrate on his painting. In fact, many of the photographs taken during this period and credited to Man Ray were actually taken by Lee. Together with Man Ray, she rediscovered the photographic technique of . She was an active participant in the surrealist movement, with her witty and humorous images. Amongst her circle of friends were , , and . She even appeared as a statue that comes to life in Cocteau's "" (1930).

After leaving Man Ray and Paris in 1932, she returned to New York and established a portrait and commercial photography studio with her brother Erik as her darkroom assistant. During this year she was included in the Modern European Photography exhibition at the Julien Levy Gallery in New York. In 1933 Levy gave Miller the only solo exhibition of her life. [Becky Conekin. Lee Miller: Model, Photographer and War Correspondent in Vogue. 2006.] Among her portrait clients were the surrealist artist , actresses Lilian Harvey and Gertrude Lawrence, and the African-American cast of the - opera "" (1934).

In 1934, she abandoned her studio to marry Egyptian businessman, Aziz Eloui Bey, who had come to New York to buy equipment for the . Although she did not work as a professional photographer during this period, the photographs she took while living in Egypt with Bey, including "Portrait of Space", are regarded as some of her most striking surrealist images. By 1937, Lee had grown bored with her life in Cairo and she returned to Paris, where she met her future husband, the British surrealist painter and . Her photographs were not included in another exhibition until 1955, when her work was displayed with exhibition at the in New York City. [Jane Livingston. Lee Miller: Photographer. Thames & Hudson 1989.]

With the outbreak of the Second World War, Miller had separated from Bey and was living in , with Roland when the bombing of the city began. Ignoring pleas from friends and family to return to the US, Miller embarked on a new career in as the official war photographer for "Vogue" documenting . Lee was accredited into the U.S. Army as a for from December 1942. She teamed up with the American photographer David E. Scherman, a "Life Magazine" correspondent on many assignments. Miller travelled to France less than a month after and recorded the first use of at the siege of , the liberation of Paris, the battle for , and the horror of the Nazi s at Buchenwald and Dachau. One photograph by Scherman of Miller in the bathtub of 's house in is one of the most iconic images from the Miller-Scherman partnership.

During this time, Miller photographed dying children in a Vienna Hospital, peasant life in post-war Hungary and finally the execution of Prime Minister Lazlo Bardossy. After the war she continued to work for Vogue for a further 2 years, covering fashion and celebrities.

After returning to Britain from eastern Europe, Lee started to suffer from severe episodes of and what later became known as . She began to drink heavily, and became uncertain about her future. In 1946, she traveled with Roland to the United States where she visited Man Ray in California. After she discovered she was pregnant with her only son, Antony, she divorced Bey and, on , married Roland. Antony was born in September 1947. In 1949, they bought Farley Farm House in . During the 1950s and 1960s, Farley Farm became a sort of artistic Mecca for visiting artists such as Picasso, Man Ray, , , , , and . While Miller continued to do the occasional photo shoot for Vogue, she soon discarded the darkroom for the kitchen becoming a successful gourmet cook. She also photographed for biographies Roland wrote about and . However, images from the war, especially the concentration camps, continued to haunt her and she started on what Antony describes as a "downward spiral". Her depression may have been accelerated by her husband's long affair with the trapeze artist Diane Deriaz. Lee rarely talked about her war experiences but it inevitably had harsh effects on her health and her relationship with her family.

Throughout her life, Miller did very little to promote her own photographic work. That Miller's work is known today is mainly due to the efforts of her son, Antony, who has been studying, conserving, and promoting his mother's work since the early 1980s. Her pictures are accessible at the "Lee Miller Archive". [ [http://www.leemiller.co.uk/about.aspx Lee Miller Archive] ]

In 1985, the first biography of Miller entitled "The Lives of Lee Miller" was written by Antony Penrose. Since then, a number of books, mostly accompanying exhibitions of Miller's photographs, have been written by art historians and writers such as Jane Livingstone, Richard Calvocoressi, and Mark Haworth-Booth. In 2005 her life story was turned into a musical "Six Pictures Of Lee Miller" with music and lyrics by British composer . It premiered at The (also in Sussex). Also in 2005 Carolyn Burke's substantial biography, "Lee Miller, A Life," was published in the U.S. by and in the U.K. by Bloomsbury. In 2007, "Traces of Lee Miller: Echoes from St Malo", an interactive CD and DVD about Miller's war photography in St Malo was released with the support of byHand Productions and .