The 9th Royal Deccan Horse was a regular cavalry regiment of the British Indian Army , it was formed from the amalgamation of two regiments after World War I. They saw service from the Mutiny of 1857 up to and including World War II.

The 9th Royal Deccan Horse can trace its formation to 1790 when it was called Asif Sah's Irregular Cavalry. Two Regiments were raised for service under the Nizam of Hyderabad in Berar who was allied with the East India Company.[1]

The Deccan Horse was frequently called for service during the 18th and 19th Centuries, winning a Victoria Cross in 1859 and was also awarded the battle honour, ‘Central India’..[1]

The Regiment was also in action during the Second Afghan War, the Burma War, and in China during the Boxer Rebellion. In 1903 during Kitcheners reform of the Indian Army the two Regiments were incorporated into the regular Indian Army with the titles XXth Deccan Horse and the 29th Lancers (Deccan Horse)..[1] 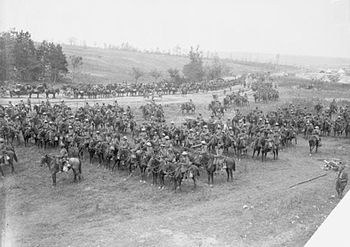 The 20th Deccan Horse was sent to France for service on the Western Front they were part of the 9th (Secunderbad) Cavalry Brigade of the 2nd Indian Cavalry Division.[2]

The 29th Lancers were also sent to France they formed part of the 8th (Lucknow) Cavalry Brigade of the 1st Indian Cavalry Division.[2]

Both Regiments would at times serve as Infantry in the trenches before being withdrawn for service in Palestine.[1]

The XXth Deccan Horse was awarded the titled Royal for their distinguished service during World War I, and in 1922 following the amalgamation of the two regiments, the Royal Deccan Horse (9th Horse) was formed.[1]

During the Second World War,the Regiment converted to tanks, and became part of the 255th Indian Tank Brigade[3] The regiment took part in the re-conquest of Burma.

Citation: Risaldar Badlu Singh was attached to 29th Lancers when "on the morning of the 23rd September 1918, his squadron charged a strong enemy position on the west bank of the river Jordan, between the river and Kh. es Samariyeh village.

"On nearing the position, Risaldar Badlu Singh realised that the squadron was suffering casualties from a small hill on the left front occupied by machine guns and 200 infantry. Without the slightest hesitation he collected six other ranks and with the greatest dash and total disregard for danger, charged and captured the position, thereby saving very heavy casualties to the squadron. He was mortally wounded on the very top of the hill when capturing one of the machine guns single handed, but all the machine guns and infantry had surrendered to him before he died.

"His valour and initiative were of the highest order." [4]