Paracelsus
This article is about Philippus von Hohenheim, known as Paracelsus. For other uses, see Hohenheim (disambiguation).

"Paracelsus", meaning "equal to or greater than Celsus", refers to the Roman encyclopedist Aulus Cornelius Celsus from the 1st century, known for his tract on medicine.[2][3] He is also credited for giving zinc its name, calling it zincum,[4] and is regarded as the first systematic botanist.[5]

Paracelsus was born and raised in the village of Einsiedeln in Switzerland. His father, Wilhelm Bombast von Hohenheim, was a Swabian chemist and physician; his mother was Swiss, she died presumably in his childhood.[6] In 1502 the family moved to Villach, Carinthia where Paracelsus' father worked as a physician.[6] He received a profound humanistic and theological education by his father, local clerics and the convent school of St. Paul's Abbey in the Lavanttal.[6] At the age of 16 he started studying medicine at the University of Basel, later moving to Vienna. He gained his doctorate degree from the University of Ferrara in 15/15/16.[6][7]

His wanderings as an itinerant physician and sometime journeyman miner[8] took him through Germany, France, Spain, Hungary, the Netherlands, Denmark, Sweden and Russia.

As a physician of the early 16th Century, Paracelsus held a natural affinity with the Hermetic, neoplatonic, and Pythagorean philosophies central to the Renaissance, a world-view exemplified by Marsilio Ficino and Pico della Mirandola. Paracelsus rejected the magic theories of Agrippa and Flamel in his Archidoxes of Magic. Astrology was a very important part of Paracelsus' medicine, and he was a practicing astrologer — as were many of the university-trained physicians working at this time in Europe. Paracelsus devoted several sections in his writings to the construction of astrological talismans for curing disease, providing talismans for various maladies as well as talismans for each sign of the Zodiac. He also invented an alphabet called the Alphabet of the Magi, for engraving angelic names upon talismans.

Paracelsus pioneered the use of chemicals and minerals in medicine. He used the name "zink" for the element zinc in about 1526, based on the sharp pointed appearance of its crystals after smelting and the old German word "zinke" for pointed. He used experimentation in learning about the human body. Paracelsus was also responsible for the creation of laudanum, an opium tincture very common until the 19th century.

Paracelsus gained a reputation for being arrogant, and soon garnered the anger of other physicians in Europe. He held the chair of medicine at the University of Basel for less than a year; while there his colleagues became angered by allegations that he had publicly burned traditional medical books. He was forced from the city after a legal dispute over a physician's fee he sued to collect.

He then wandered Europe, Africa and Asia Minor, in the pursuit of hidden knowledge. He revised old manuscripts and wrote new ones, but had trouble finding publishers. In 1536, his Die grosse Wundartznei (The Great Surgery Book) was published and enabled him to regain fame. Paracelsus' life is connected to the birth of Lutheranism, and his opinions on the nature of the universe are better understood within the context of the religious ideas circulating during his lifetime.

He died at the age of 48 of natural causes, and his remains were buried according to his wishes in the cemetery at the church of St Sebastian in Salzburg. His remains are now located in a tomb in the porch of the church.

After his death, the movement of Paracelsianism was seized upon by many wishing to subvert the traditional Galenic physics, and thus did his therapies become more widely known and used.

His motto was "Alterius non sit qui suus esse potest" which means "Let no man belong to another that can belong to himself."

Paracelsus believed in the Greek concept of the four elements, but he also introduced the idea that, on another level, the cosmos is fashioned from three spiritual substances: the tria prima of mercury, sulfur, and salt. These substances were not the simple substances we recognize today, but were rather broad principles that gave every object both its inner essence and outward form. Mercury represented the transformative agent (fusibility and volatility); sulfur represented the binding agent between substance and transformation (flammability); and salt represented the solidifying/substantiating agent (fixity and noncombustibility). For example, when a piece of wood is burnt, the products reflect its constitution: smoke reflects mercury, flame reflects sulfur, and ash reflects salt.[2]

The tria prima also defined the human identity. Sulfur embodied the soul, (the emotions and desires); salt represented the body; mercury epitomized the spirit (imagination, moral judgment, and the higher mental faculties). By understanding the chemical nature of the tria prima, a physician could discover the means of curing disease.

Paracelsus pioneered the use of chemicals and minerals in medicine. His hermetical views were that sickness and health in the body relied on the harmony of man (microcosm) and Nature (macrocosm). He took an approach different from those before him, using this analogy not in the manner of soul-purification but in the manner that humans must have certain balances of minerals in their bodies, and that certain illnesses of the body had chemical remedies that could cure them. (Debus & Multhauf, p. 6-12)

As a result of this hermetical idea of harmony, the universe's macrocosm was represented in every person as a microcosm. According to the insights at the time, there were Seven planets on the sky, Seven metals on Earth and Seven centers (or major organs) in Man — seven was a special number. Everything was heavenly and closely interrelated (see table).

Diseases were caused by poisons brought here from the stars. But 'poisons' were not necessarily something negative, in part because related substances interacted, in part because only the dose determined if a substance was poisonous or not. Evil could expel evil. Therefore, poisons could have beneficial medical effects. Because everything in the universe was interrelated, beneficial medical substances could be found in herbs, minerals and various alchemical combinations hereof. Paracelsus viewed the universe as one coherent organism pervaded by a uniting lifegiving spirit, and this in its entirety, Man included, was 'God'. His views put him at odds with the Church, for whom there necessarily had to be a difference between the Creator and the created.[9]

He summarized his own views: "Many have said of Alchemy, that it is for the making of gold and silver. For me such is not the aim, but to consider only what virtue and power may lie in medicines." (Edwardes, p. 47) (also in: Holmyard, Eric John. Alchemy. p. 170)

Hippocrates put forward the theory that illness was caused by an imbalance of the four humours: blood, phlegm, black bile and yellow bile. These ideas were further developed by Galen into an extremely influential and highly persistent set of medical beliefs that were to last until the mid 1850s. The dominant medical treatments at Paracelsus' time were specific diets to help in the "cleansing of the putrefied juices" combined with purging and bloodletting to restore the balance of the four humours. Paracelsus supplemented and challenged this view with his beliefs that illness was the result of the body being attacked by outside agents.

Paracelsus' major work On the Miners' Sickness and Other Diseases of Miners documented the occupational hazards of metalworking including treatment and prevention strategies. He also wrote a book on the human body contradicting Galen's ideas. 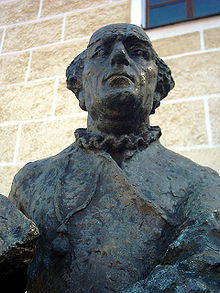 Monument to Paracelsus in Beratzhausen, Bavaria 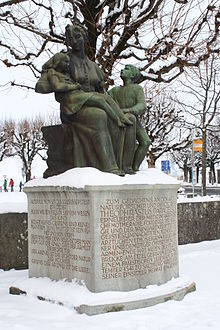 German: Alle Ding' sind Gift, und nichts ohn' Gift; allein die Dosis macht, daß ein Ding kein Gift ist.
"All things are poison, and nothing is without poison; only the dose permits something not to be poisonous."

"The dose makes the poison."

That is to say, substances considered toxic are harmless in small doses, and conversely an ordinarily harmless substance can be deadly if over-consumed.

Paracelsus is credited as providing the first clinical/scientific mention of the unconscious. In his work Von den Krankeiten he writes: "Thus, the cause of the disease chorea lasciva is a mere opinion and idea, assumed by imagination, affecting those who believe in such a thing. This opinion and idea are the origin of the disease both in children and adults. In children the case is also imagination, based not on thinking but on perceiving, because they have heard or seen something. The reason is this: their sight and hearing are so strong that unconsciously they have fantasies about what they have seen or heard."

Paracelsus is claimed by the Fraternitas Rosae Crucis to be the true identity of the mythical alchemist Christian Rosenkreutz who was the major figure in the Fama Fraternitatis published in 1614 in Germany, which at the time caused excitement throughout Europe by declaring the existence of a secret brotherhood of alchemists and sages who were preparing to transform the arts, sciences, religion, and political and intellectual landscape of Europe while wars of politics and religion ravaged the continent. Divergent views believe Rosenkreuz to be a pseudonym for a more famous historical figure like Francis Bacon.

Paracelsus is also often cited as coining the phrase "the dose makes the poison". Although he did not say this precisely, it seems that Paracelsus was indeed well aware of the principle (see discussion on Toxicology above).

Many books mentioning Paracelsus also cite him as the origin of the word "bombastic" to describe his often arrogant speaking style, which the following passage illustrates:

I am Theophrastus, and greater than those to whom you liken me; I am Theophrastus, and in addition I am monarcha medicorum and I can prove to you what you cannot prove...I need not don a coat of mail or a buckler against you, for you are not learned or experienced enough to refute even a word of mine...As for you, you can defend your kingdom with belly-crawling and flattery. How long do you think this will last?...Let me tell you this: every little hair on my neck knows more than you and all your scribes, and my shoe buckles are more learned than your Galen and Avicenna, and my beard has more experience than all your high colleges.

However, according to the Oxford English Dictionary, the origin of the word "bombastic" is not a play on Paracelsus's middle name, Bombastus. Instead, that dictionary cites "bombast": an old term for cotton stuffing.

Published during his lifetime