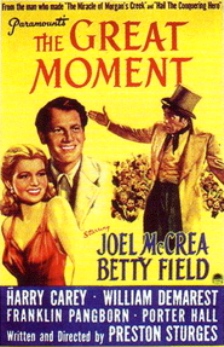 "The Great Moment" is a fy|1944 written and directed by . Based on the book "The Triumph Over Pain" (1940) by René Fülöp-Miller, the film tells the story of Dr. William Thomas Green Morton, a 19th century Boston dentist who discovered the use of as an . The film stars and , and features , , and .

The movie was filmed in fy|1942 but not released for over two years, and the released version was not what Preston Sturges had envisioned. disliked the film Sturges had made, and pulled it from Sturges' control, re-titled and re-edited it, in the process making it more confusing for the audience to understand. This version of the film was released, and marketed in a way that made it appear to be one of Sturges' comedies. The film was not well-received by the critics or the public, and marked the end of a sustained run of success for Sturges, who had already left Paramount by the time the film was released.

Although rarely seen today, the film is worth viewing for its flashback structure &ndash; comparable in some ways to "", which was influenced by the earlier film "The Power and the Glory", for which Sturges wrote the screenplay &ndash; and for its irreverant and subtly satirical tone, unusual for a time when most s were over-inflated and sentimental.

William Thomas Green Morton () is a young oral surgeon in Boston in the 1800s who is determined to find a way to extract teeth without pain. When he discovers the answer almost by accident, it turns out to be cleaning fluid, sulphuric , highly purified and delivered through a glass inhaler invented and patented by Morton. Morton tests his discovery both on himself, and on a music teacher, Eben Frost (), who is in excruciating pain from a bad tooth. Only Morton and his devoted wife Elizabeth () know the secret of "letheum" (as they call it), which has enabled Morton's "painless" dental practice, with a staff of dentists, to thrive. Keeping the discovery a secret could make Morton rich.

Morton wishes to spread the word about letheum, and demonstrates the use of it as a surgical to Dr. John C. Warren () of . The surgeons are amazed that the patient feels no pain under the influence of letheum, but protest that the doesn't allow them to use , the ingredients of which are unknown. Moved by the plight of a girl about to undergo surgery which she thinks will be painless, Morton reveals his secret.

Morton is hailed as "The Benefactor of Mankind", but when his patent for the glass inhaler is infringed by the American military, he and his family fall into virtual poverty while they wait to see if President () will sign a bill passed by Congress which will restore the patent and give Morton a $100,000 reward for his contributions to humanity. But Pierce is being pressured by newspapers inflamed by jealous medical rivals of Morton, and he refuses to sign the bill unless Morton files a infringement lawsuit against an Army or Navy doctor, which he does, even though he knows it will look as if he is capitalizing on the pain of wounded soldiers. For this, Morton is condemned by the medical community and, after he loses the lawsuit, expelled from the .

Cast notes:
*Members of Sturges' unofficial "stock company" of character actors who appear in "The Great Moment" include: George Anderson, , , , , William Demarest, Robert Dudley, , Robert Greig, Harry Hayden, , , J. Farrell MacDonald, Torben Meyer, , Franklin Pangborn, , Victor Potel, , , Julius Tannen, and . Paramount wanted Sturges to stop using the same actors over and over again, but he felt that "these little players who had contributed so much to my first hits had a moral right to work in my subsequent pictures."

The saga of "The Great Moment" &ndash; which during various stages of its development was called "Immortal Secret", "Great Without Glory", "Morton the Magnificent", and "Triumph Over Pain" &ndash; begins in fy|1939, with a screenplay for about the life of written by , , Les River, and Waldo Twitchell. The film was to be directed by , produced by and , with and to star as Morton and Eben Frost. When Cooper left Paramount, production on the film was delayed, although there may have been other reasons as well. It's unlikely that any film was actually shot at that time, but Paramount did go so far as to check with historians and dental organizations to confirm the screenplay's depiction of Morton, finding that opinion was divided on his character and on his claim to have discovered the first practical anesthesia. In fact, when Rene Fulop-Miller's book "Triumph over Pain" was published in 1940, it caused a storm of controversy, as many disputed its claims regarding Morton.

In 1942, production moved ahead when Paramount hired Preston Sturges to direct the film, and bought the rights to an short film "Life of William Morton, Discoverer of Anesthesia", which is not credited in the released film as a source. Sturges then revised the 1939 screenplay with Ernst Laemmle, whose work was uncredited. At that time, was being considered to play the lead.

The film went into production on fy|1942 and wrapped on , on budget and a day under schedule.

Sturges shot this foreward to open the film:

One of the most charming characteristics of Homo sapiens, the wise guy on your right, is the consistency with which he has stoned, crucified, hanged, flayed, boiled in oil and otherwise rid himself of those who consecrated their lives to further his comfort and well-being, so that all his strength and cunning might be preserved for the erection of ever larger monuments, memorial shafts, triumphal arches, pyramids and obelisks to the eternal glory of generals on horseback, tyrants, usurpers, dictators, politicians, and other heroes who led him, from the rear, to dismemberment and death. This is the story of the Boston dentist who gave you ether-before whom in all time surgery was agony, since whom science has control of pain. It should be almost unnecessary then to tell you that this man, whose contribution to human mercy is unparalleled in the history of the world, was ridiculed, reviled, burned in effigy and eventually driven to despair and death by the beneficiaries of his revelation. Paramount Pictures, Incorporated, has the honor of bringing you, at long last, the true story of an American of supreme achievement &ndash; W.T.G. Morton of Boston, Massachusetts, in a motion picture called "Triumph Over Pain".

Sturges structured the film in much the same way he had the screenplay for "The Power and the Glory", with the story being told in multiple flashbacks.

Paramount did not immediately release the film, because they disliked the non-sequential arrangement of the scenes, the tone of some of the acting, and the original forward, which they deemed was inappropriate for wartime. The film was taken away from Sturges by executive producer , who never quite trusted him and resented the control Sturges had over his projects, and found the Morton story to be repulsive and unsuitable for mainstream audiences. The film was heavily recut, to the point that the film became almost incomprehensible, and the title changed over Sturges' strong objections. (Because of the re-editing, the film is listed with various runtimes of 80, 83, 87, and 90 minutes, and some of the actors listed in official cast lists may not actually appear in the film.) At some point in this process, Sturges' contract with Paramount ran out, and he left the studio (although he came back to do some unpaid re-shooting and re-editing of "Hail the Conquering Hero") Sturges later wrote about his departure "I guess Paramount was glad to be rid of me eventually, as no one there ever understood a word I said." [Frankel, Mark [http://www.tcm.com/tcmdb/title.jsp?stid=77205&category=Articles "Hail the Conquering Hero" (TCM article)] ]

The film as released now opens with this forward:

It does not seem to be generally understood that before ether there was nothing. The patient was strapped down...that is all. This is the story of W. T. G. Morton of Boston, Mass., before whom in all time surgery was agony, since whom science has control of pain. Of all things in nature great men alone reverse the laws of perspective and grow smaller as one approaches them. Dwarfed by the magnitude of his revelation, reviled, hated by his fellow men, forgotten before he was remembered, Morton seems very small indeed until the incandescent moment he ruined himself for a servant girl and gained immortality.

"The Great Moment" premiered in on fy|1944, more than two years after filming had wrapped, and went into general release on of that year. [IMDB [http://www.imdb.com/title/tt0036880/releaseinfo Release dates] ] The film was not well-received, either by the critics or at the box office, becoming the only film directed by Sturges for Paramount not to turn a profit. Sturges' reputation never quite rebounded from its failure, and his post-Paramount career is the record of a sad decline.