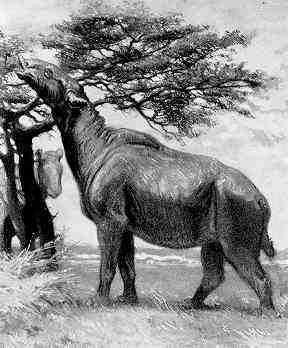 "Paraceratherium", also commonly known as "Indricotherium" or "Baluchitherium" or just "Indricothere" (see taxonomic discussion below), is an extinct of gigantic hornless -like mammals, belonging to the family of the . Their fossils have been found in many parts of , including Kazakhstan, Pakistan, India, Mongolia, and China. It lived from the middle to the early , roughly from 30 to 20 million years ago, when this region of Asia was covered in lush subtropical forests and woodlands.

"Paraceratherium" is the largest land mammal known, probably even larger than the largest species of s, though the largest species of mammoth, such as the ("Mammuthus trogontherii") may have approached it in size and weight. Adult "Paraceratherum" are estimated to have been 5 - 5.5 m (18 ft) tall at the shoulder, over 8 m (27-28 ft) in length without the tail, a maximum raised head height of about 7.5 m (24-25 ft), and a skull length of 1.35 m (4.5 ft). Different weight estimates vary greatly, but most realistic and reliable weight estimates are from over 10 up to about 20 (metric) tons.Fact|2008|date=July 2008. This puts it in the weight range of some medium sized s.

It was a herbivore that stripped leaves from trees with its down-pointing, tusk-like upper teeth that occluded forward-pointing lower teeth. It had a long, low, hornless skull and vaulted frontal and nasal bones. Its front teeth were reduced to a single pair of incisors in either jaw, but they were conical and so large that they looked like small tusks. The upper incisors pointed straight downwards, while the lower ones jutted outwards. The upper lip was evidentlyFact|date=August 2008 extremely mobile. The neck was very long, the trunk robust, and the limbs long and thick, column-like.

Its type of dentition, its mobile upper lip and its long legs and neck indicate that it was a browser that lived on the leaves and twigs of trees and large shrubs.

Taxonomy and species of "Paraceratherium"

While more distinct at the level, there is uncertainty and disagreement with regard to the level of taxonomy.

"Baluchitherium" is now widely regarded as a synonym of (i.e. the same as) either "Paraceratherium" or "Indricotherium".

However, there has been disagreement over whether "Indricotherium" is a distinct genus from "Paraceratherium". Lucas and Sobus in their 1989 review of the subfamily (see reference below), argue for synonymy, and consider that the differences between the two are of species level at most, and may even be the result of sexual dimorphism in a single species, with the larger more robust Indricotherium with larger incisors being probably the male, and the more gracile Paraceratherium the female. Others, however, have expressed doubts about this (concerning the interpretation of the shape of the skull). Even if these two do turn out to be distinct genera, they would still be similar in size and appearance.

If they are considered the same genus, then "Indricotherium" would become a junior synonym of "Paraceratherium", because, according to the priority principle of , the first publication, and hence the oldest valid name, takes priority and the name "Paraceratherium" predates the other.

"Paraceratherium zhajremensis" (Osborn, 1923) from the Middle and late Oligocene of .

"Paraceratherium orgosensis" (Chiu, 1973) is the largest species, the teeth being at least a quarter again as big as "P. transouralicum" (see Lucas and Sobus p.363/fig.19.2). It is known from the middle and late Oligocene of , northwest . The three synonyms are "Dzungariotherium orgosensis" Chiu, 1973 and (each of the following named after a separate skull) "Dzungariotherium turfanensis" Xu & Wang, 1978 and "Paraceratherium lipidus" Xu & Wang, 1978. While there is some variation in details of the proportions of the skull (perhaps due to ), all occur in a close geographical region and have distinct first and second upper molar s.

"Paraceratherium" means "near horn animal" in old Greek, indicating the fact that is was hornless, but related to the es.

"Indricotherium" is named after a mythical Russian beast called the Indrik-Beast, considered the most powerful creature and the father of the animals.

"Baluchitherium" means "beast of Baluchistan", as it was first discovered in Baluchistan, western Province of .

In / author 's book , a young boy befriends a genetics project named Balook, who is a reconstructed Baluchitherium born in a laboratory through gene manipulation.