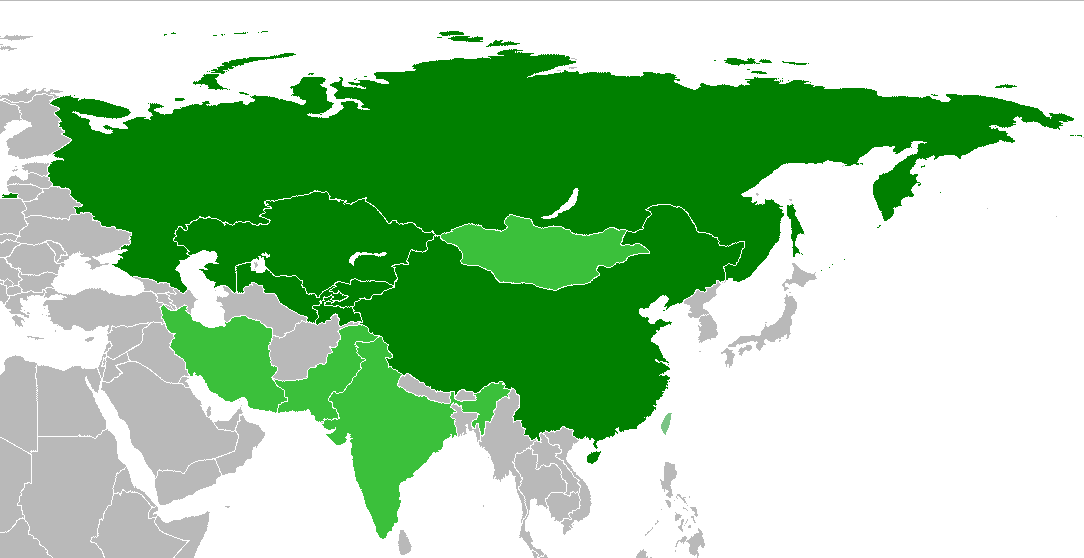 membership = 6 member states 4 observer states
admin_center_type = Secretariat
admin_center = , China (PRC)
languages_type = s
languages = Chinese, Russian
leader_title1 = Secretary General
leader_name1 =
leader_title2 = Deputy Secretary General
leader_name2 =
established = 15 June 2001
official_website = [http://www.sectsco.org/ www.sectsco.org]
footnote1 = The (PRC) claims, and the Shanghai Cooperation Organisation recognises, as part of PRC's territory. However, the island is subject to the jurisdiction of the (ROC). (Ref. )The Shanghai Cooperation Organisation (SCO) is an mutual-security organization which was founded in 2001 by the leaders of China, , , , and . Except for Uzbekistan, the other countries had been members of the Shanghai Five, founded in 1996; after the inclusion of Uzbekistan in 2001, the members renamed the organization.

The official s of the Shanghai Cooperation Organisation are Chinese and Russian. The official names of the organisation in the two languages, abbreviations in parentheses, are:

The Shanghai Five grouping was originally created April 26, 1996 with the signing of the "Treaty on Deepening Military Trust in Border Regions" in by the heads of states of Kazakhstan, the People's Republic of China, Kyrgyzstan, Russia and Tajikistan. April 24, 1997 the same countries signed the "Treaty on Reduction of Military Forces in Border Regions" in a meeting in .

Subsequent annual summits of the Shanghai Five group occurred in (Kazakhstan) in 1998, in (Kyrgyzstan) in 1999, and in (Tajikistan) in 2000.

In 2001, the annual summit returned to , . There the five member nations first admitted in the Shanghai Five mechanism (thus transforming it into the Shanghai Six). Then all six heads of state signed on June 15, 2001, the "Declaration of Shanghai Cooperation Organisation", praising the role played thus far by the Shanghai Five mechanism and aiming to transform it to a higher level of cooperation. In July 2001, Russia and the PRC, the organisation's two leading nations, signed the Treaty of Good-Neighborliness and Friendly Cooperation.

In June 2002, the heads of the SCO member states met in , Russia. There they signed the SCO Charter which expounded on the organisation's purposes, principles, structures and form of operation, and established it officially from the point of view of international law.

The council of Foreign Ministers also hold regular meetings, where they discuss the current international situation and the SCO's interaction with other international organizations. [ [http://www.malaysia.mid.ru/press2007/e_22.html Session of the Council of Foreign Ministers from Member States of the Shanghai Cooperation Organization] Embassy of the Russian Federation in Malaysia]

As the name suggests, the Council of National Coordinators coordinates the multilateral cooperation of member states within the framework of the SCO's charter.

The Secretariat of the SCO is the primary executive body of the organization. It serves to implement organizational decisions and decrees, drafts proposed documents (such as declarations and agendas), function as a document depository for the organization, arranges specific activities within the SCO framework, and promotes and disseminates information about the SCO. It is located in Beijing. The current SCO Secretary-General is of Kazakhstan. [ [http://www.sectsco.org/html/00037.html SCO Secretariat in Brief] SCO Website]

The Regional Anti-Terrorist Structure (RATS), headquartered in , Uzbekistan, is a permanent organ of the SCO which serves to promote cooperation of member states against the of , and . The Head of RATS is elected to a three-year term. Each member state also sends a permanent representative to RATS. [ [http://www.sectsco.org/fk-03.html Information on Regional Anti-Terrorist Structure of Shanghai Cooperation Organization] SCO Website]

The SCO is primarily centered around its member nations' n security-related concerns, often describing the main threats it confronts as being , and . However evidence is growing that its activities in the area of social development of its member states is increasing fast.Fact|date=September 2008

Grigory Logninov claimed in April 2006 that the SCO has no plans to become a military bloc; nonetheless he argued that the increased threats of "terrorism, extremism and separatism" make necessary a full-scale involvement of armed forces. [ [http://www.studentpa.info/spip.php?article248 SCO gets ready for joint military exercise] World Student Press Agency]

There have been a number of SCO joint military exercises. The first of these was held in 2003, with the first phase taking place in Kazakhstan and the second in China.

On a larger scale, but outside the SCO framework, the first ever joint military exercise between the PRC and , called started on August 19, 2005. Following their successful completion, Russian officials have begun speaking of India joining such exercises in the future and the SCO taking on a military role.

The joint military exercises in 2007 (known as "Peace Mission 2007") took place in Russia, near the and close to Central Asia, as was agreed upon on April 2006 at a meeting of SCO Defense Ministers. More than 4,000 soldiers participated from China. Air forces and precision-guided weapons were have likely to be used. Russian Defense Minister said that the exercises will be transparent and open to media and the public. [ [http://news.xinhuanet.com/english/2006-04/27/content_4479247.htm SCO's anti-terrorism military drill to be transparent] Xinhua.net]

In October 2007, the SCO signed an agreement with the (CSTO), in the Tajik capital Dushanbe, to broaden cooperation on issues such as security, crime, and drug trafficking. [ [http://www.dailytimes.com.pk/default.asp?page=2007%5C10%5C06%5Cstory_6-10-2007_pg4_3 Security alliances led by Russia, China link up] Daily Times] Joint action plans between the two organizations are planned to be signed by early 2008 in Beijing. [ [http://jamestown.org/edm/article.php?article_id=2372661 Kazakhstan Notes Afghanistan's Emerging Security Agenda] Eurasia Daily Monitor]

A Framework Agreement to enhance economic cooperation was signed by the SCO member states on 23 September 2003. At the same meeting the PRC's Premier, , proposed a long-term objective to establish a in the SCO, while other more immediate measures would be taken to improve the flow of goods in the region. A follow up plan with 100 specific actions was signed one year later, on September 23, 2004. [cite web |url=http://www.ictsd.org/weekly/03-10-01/story3.htm |title= China Intensifies Regional Trade Talks |archiveurl=http://web.archive.org/web/20071024121832/http://www.ictsd.org/weekly/03-10-01/story3.htm |archivedate=2007-10-24 International Centre for Trade and Sustainable Development (ICTSD)] [ [http://www.shaps.hawaii.edu/fp/russia/2004/20040923_sco_jc.html Joint Communique of the Council of the Governmental Heads (Prime Ministers) of Shanghai Cooperation Organization Member States] University of Hawaii]

On 26 October 2005, the Summit of the SCO, the Secretary General of the Organisation said that the SCO will prioritise joint energy projects; such will include the oil and gas sector, the exploration of new hydrocarbon reserves, and joint use of water resources. The creation of an Inter-bank SCO Council was also agreed upon at that summit in order to fund future joint projects. The first meeting of the SCO Interbank Association was held in Beijing on 21-22 February 2006. [ [http://www.jamestown.org/edm/article.php?article_id=2370411 Shanghai Cooperation Organization Eyes Economic, Security Cooperation] The Jamestown Foundation] [ [http://eng.nbu.com/news/read.php?id=421 SCO Ministers of Foreign Economic Activity and Trade to meet in Tashkent] National Bank of Uzbekistan] On 30 November 2006, at "The SCO: Results and Perspectives", an international conference held in , the representative of the Russian Foreign Ministry announced that Russia is developing plans for an SCO "Energy Club". [ [http://eng.gazeta.kz/art.asp?aid=84086 Russia's Foreign Ministry develops concept of SCO energy club] Gazeta.kz] . The need for this "club" was reiterated by Moscow at an SCO summit in November 2007. Other SCO members, however, have not committed themselves to the idea. [ [http://www.eurasianet.org/departments/insight/articles/eav110707a.shtml Russia Urges Formation of Central Asian Energy Club] Eurasianet]

An SCO Arts Festival and Exhibition was held for the first time during the Summit in 2005. Kazakhstan has also suggested an SCO festival to take place in 2008, in . [ [http://www.kazind.com/newsarchives/newsvol66.html Kazakhstan Backs Promotion of SCO Cultural Ties] Embassy of Kazakhstan in India]

According to the Charter of the SCO, summits of the Council of Heads of State shall be held annually at alternating venues. The locations of these summits follow the alphabetical order of the member state's name in Russian.

Currently, the Shanghai Cooperation Organization does not have an official mechanism for admitting new members. [ [http://www.interfax.kz/?lang=eng&int_id=10&function=view&news_id=1982 Moratorium on SCO expansion unlikely to be lifted in near future - source] Interfax Kazakhstan] Several states, however, participate as observers, some of whom have expressed interest in becoming full members in the future.

*IRN currently has observer status in the organisation, and applied for full membership on March 24, 2008.

*PAK currently has observer status in the SCO. Former Pakistani President argued in favour of Pakistan's qualification to join the organisation as a full member during a joint summit with China in 2006. China said that it would convey Pakistan’s desire to all SCO member states. In turn, Musharraf was formally invited to the sixth summit of the SCO to take place in in June. Sino-Pak relations go back decades when Pakistan helped China enter the United Nations and China helped Pakistan get a veto aganist the Kashmir issue later on. China is Pakistan's biggest arms and technology supplier and the third biggest trading partner as well as the basis for Western China's economic growth as it would need the Ports of Pakistan. The linkages between China and Pakistan are also strengthed through the almost unhindered economic trade between the Northern Areas of Pakistan with the muslim majority, semi-autonomous, Xinjiang Province of China, throug the Karakorum Highway.

Pakistan and Iran have been lobbying for full membership, while India and Mongolia have not shown strong interest in becoming official members.

*AFG, while not an observer, is currently part of the SCO-Afghanistan Contact Group. The contact group was established in November 2005, and serves as a mechanism for SCO member states to jointly contribute to reconstruction and stability in Afghanistan. [ [http://english.people.com.cn/90001/90777/6245785.html SCO, Afghanistan need to deepen cooperation, secretary general] People's Daily]

*BLR has applied for observer status in the organisation and has been promised Kazakhstan's support towards that goal.Fact|date=April 2008 However, Russian Defense Minister voiced doubt on the probability of Belarus' membership, saying that Belarus was a purely European country.

Power balance in a "multi-polar world"

SCO countries (full members and observers) comprise a hefty 25% of Earth's land area. Although the declaration on the establishment of the Shanghai Cooperation Organisation contained a statement that it "is not an alliance directed against other states and regions and it adheres to the principle of openness", many observers believe that one of the original purposes of the SCO was to serve as a counterbalance to and the and in particular to avoid conflicts that would allow the United States to intervene in areas near both and . [cite news|last=Tannock|first=Charles|title=Backing Kazakhstan's 'great game'|publisher=Guardian Weekly|date=February 18, 2008|url=http://commentisfree.guardian.co.uk/charles_tannock/2008/02/backing_kazakhstans_great_game_.html]

The applied for observer status in the SCO, but was rejected in 2005. [ [http://commentisfree.guardian.co.uk/dilip_hiro/2006/06/shanghai_surprise.html Shanghai surprise] Guardian Unlimited]

At the Astana summit in July 2005, with the wars in Afghanistan and Iraq foreshadowing an indefinite presence of U.S. forces in Uzbekistan and Kyrgyzstan, the SCO urged the U.S. to set a timetable for withdrawing its troops from SCO member states. Shortly afterwards, Uzbekistan asked the U.S. to leave the K-2 air base. [ [http://www.hindu.com/2005/07/08/stories/2005070800711400.htm Central Asia: China and Russia up the ante] The Hindu]

Recently the SCO has made no direct comments against the U.S. or its military presence in the region. However, several indirect statements at the past summits, including the 2007 summit in , have been viewed as "thinly veiled swipes at Washington". [ [http://www.eurasianet.org/departments/insight/articles/eav082007a.shtml Shanghai Cooperation Organization Summiteers Take Shots at US Presence in Central Asia] Eurasianet]