The New Zealand Cadet Corps (NZCC), is one of the three corps in the New Zealand Cadet Forces, the other two being the Air Training Corps, and Sea Cadet Corps. There is no reference to the Army within the official title of the NZCC, but an army theme is used for the NZCC. All of its members, from the cadets themselves to the officers and the support committees are civilian volunteers. Members have no obligation to head into the New Zealand Defence Force (NZDF) however some do choose to join the NZDF.

The NZCC is managed at a national level by the Commandant (usually a Regular Force Lieutenant-Colonel/Wing Commander/Commander), and his/her Staff at Defence Force Headquarters in Wellington. (The current Commandant is Commander Glen Stokes RNZN)

Each unit is led and managed by the Cadet Unit Commander, and his/her officers and staff.

There are currently 38 New Zealand cadet Corps Units in New Zealand. They are:

The uniform worn by NZCC members is the same as that of the New Zealand Army, except that for all ranks, the lettering on the bottom of the rank insignia shoulder boards reads CADET FORCES rather than NEW ZEALAND to differentiate NZCC personnel from New Zealand Army personnel. Furthermore, NZCC rank insignia are red, a colour no longer used by the New Zealand Army for rank insignia. Officer Service Dress Uniforms have a shoulder flash reading NEW ZEALAND CADET FORCES, rather than NEW ZEALAND for the same reason. The cadets wear a NZCF cap badge (same as NZCC logo) on their beret, Cadets wear their achievements on a shoulder brassard. Officers who were formerly cadets do not wear their cadet awards on the officer uniform.. 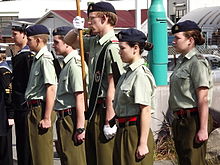 An example of the NZCC SDAR Uniform 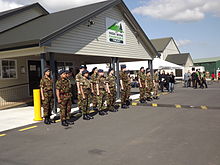 An example of the NZCC DPM Uniform

Cadets can join from the age of 13, and may serve as a Cadet or Cadet NCO until their 18th birthday. Under Officers may serve up until their 21st birthday. Units provide uniform, but may hold bonds to ensure that they are returned. Unit fees are set by each unit annually, but are normally between $10.00-$30.00 per term. Cadets may in time be promoted to NCO ranks. Cadet NCO ranks are based on the New Zealand Army Infantry ranks, and are

Cadets who have received the neccessary training, and have the desire and committment to become an NZCF Officer can also serve as Under Officers. Under Officers are Oficers-in-training and are normally treated as Officers, but are however not entitled to salutes.

The exception is that Under Officer is not a rank in the NZ Army. The U/O rank slide is based upon the Air Force Officer cadet rank and a similar rank is used in the New Zealand army Officer cadet School. In the NZCC, NCO ranks are often abbreviated by omitting the "Cadet" prefix. However, not all cadets become NCOs, but all get the chance to train and progress though the different levels of training, Basic, Corps (junior), and Advanced (senior) levels, by demonstrating knowledge of subjects in their training year.

Adult Members can serve in two capacities: Commissioned Officers or Civilian Instructors. Officers are commissioned into the New Zealand Cadet Forces, with the post-nominal letters NZCF, at the rank of Second Lieutenant, and can be promoted to Lieutenant, Captain or Major after completing the necessary training and service. To reach Major the officer must have served as the commanding officer of a cadet unit. Officers are unpaid volunteers, therefore they receive no pay for routine parades and unit activities. They are paid when attending training course run by the New Zealand Defence Force. Civilian Instructors are civilians who help train cadets. They do not wear uniform, but they are generally treated the similarly to officers by cadets. Members of the NZDF are occasionally attached to cadet units to assist in conducting training. This is normally because they know a cadet/officer in that unit, or if they have a particular interest in cadet forces. 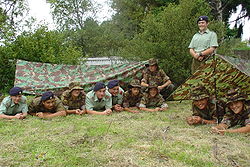 Most units conduct classroom training in bushcraft and survival skills, and hold regular Basic and Advanced bushcraft camps in the local area during weekends. There is a national bushcraft course held either at Dip Flat near RNZAF Base Woodbourne or at the Waiouru Army Camp. 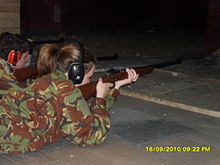 Units conduct regular range training with smallbore rifles. Some units have their own armouries and ranges at their parade hall. Cadets must pass a TOET (Test of Elementary Training) before being allowed on the range. The rifle used at present is the Norinco JW-15A.[1]

Also, senior Cadets and Officers may be selected to staff these courses (except for the shooting coaches course)

Also, Officers may be selected to staff these courses, except for the Range Safety Officer course.