Dennis Brain (17 May 1921 – 1 September 1957) was a British virtuoso horn player and was largely credited for popularizing the horn as a solo classical instrument with the post-war British public. With the collaboration of Herbert von Karajan and the Philharmonia Orchestra, he produced what many still consider to be the definitive recordings of Wolfgang Amadeus Mozart's horn concerti.

Dennis Brain was born in London to a family already well-known for producing fine horn players.

His uncle, Alfred Edwin Brain Jr. (24 October 1885 – 29 March 1966), had a successful career playing horn in the United States with the New York Symphony Society and later as a soloist in Hollywood.

His mother, Marion Brain, was a composer and wrote cadenzas to the first and third Mozart horn concerti which her husband then performed.

His brother, Leonard Brain, (1915–1975), was an oboist and performed with Dennis in a wind quintet that Dennis formed. Tina Brain, one of Leonard's children (Dennis' niece), also became a professional horn player. 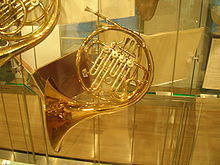 Brain's Alexander single B♭ horn, damaged in the crash and restored by Paxman, on display at the Royal Academy of Music

At an early age, Brain was allowed to blow a few notes on his father's horn every Saturday morning. Aubrey Brain held the belief that students should not study the horn seriously until the later teenage years, when the teeth and embouchure became fully developed. During these years, Brain studied piano and organ. It was not until the age of 15 that Dennis was to transfer from St Paul's School to the Royal Academy of Music to study horn, under his father's tutelage. While there, he continued his piano studies under Max Pirani and organ under G. D. Cunningham.

Brain debuted in performance on 6 October 1938, playing second horn under his father with the Busch Chamber Players at the Queen's Hall. They performed Johann Sebastian Bach's Brandenburg Concerto No. 1. Brain's first recording was of Mozart's Divertimento in D Major K. 334 in February, 1939 with the Léner Quartet. Again, he played second under his father.

At the age of 21, Brain was appointed to the first horn position in the National Symphony Orchestra. This tenure did not last long as he was soon conscripted into the armed forces with his brother in World War II. Both brothers joined the Central Band of the Royal Air Force. When the Royal Air Force Symphony Orchestra was formed, Brain joined it. That ensemble went on a goodwill tour of the United States. During the tour, a number of orchestral conductors invited Brain to join their groups after the war, including Leopold Stokowski of the Philadelphia Orchestra.

Brain originally played a French instrument, a Raoux piston-valve horn, similar to that used by his father. This type of instrument has a particularly fluid tone and a fine legato, but a less robust sound than the German-made instruments which were becoming common. In 1951 he switched to an Alexander single B♭ instrument, complaining that "they want me to play the right notes all of the time!" The Alexander had a custom lead pipe which was narrower than the usual, and offered a sound which, if not comparable to the Raoux, at least gave a nod in the direction of the lighter French instrument.

Expanding his interest in the neglected area of chamber music, Brain formed a wind quintet with his brother in 1946. This group eventually grew in size and toured in Germany, Italy and Austria. Brain also founded a trio with pianist Wilfrid Parry and violinist Jean Pougnet. The trio toured Scotland twice and made plans to tour Australia in the winter of 1957. Briefly, Brain put together a chamber ensemble consisting of his friends so that he could conduct music.

In November 1953, under the direction of Herbert von Karajan, and accompanied by the Philharmonia Orchestra, Brain recorded the Mozart Horn Concertos Nos. 1–4 for EMI. In July 1954, again conducted by Karajan, Brain performed the organ part in a recording of the Easter hymn from Pietro Mascagni's Cavalleria rusticana.

He played with Karl Haas's London Baroque Ensemble, both on recordings (notably Dittersdorf's Partita in D, Dvořák's Serenade in D minor for Winds, Op. 44, and Handel's Aria for two horns, oboes and bassoon)[1] and in concert.

Brain produced a radio program entitled The Early Horn in 1955. In it, he emphasized the importance of the player over the instrument in the production of the perfect tone.

Showing off his humorous style, Brain performed a Leopold Mozart horn concerto on rubber hose pipes at a Gerard Hoffnung music festival in 1956, trimming the hose to length with garden shears to achieve the correct tuning.

Brain was notoriously careless; his instrument for many years was a French-made piston valve horn with an impressive array of dents, and Benjamin Britten autographed one score "For Dennis - in case he loses the other one". But Sir Thomas Beecham described Brain as a "prodigy"[2] and Noël Goodin characterised him as "the genius who tamed the horn"; his old-fashioned and ill-treated instrument was the same as can be heard in many classic recordings of the time. His Alexander horn was badly damaged in his fatal crash, but has since been restored by Paxmans of London and is on public display in the Royal Academy of Music's free museum.

Influence on the horn repertoire

Francis Poulenc wrote Elegie for Horn and Piano to commemorate Brain's death. He happened to be in London when Brain was killed, and he wrote the Elegie the next day. It was premiered on 1 September 1958, exactly one year after Brain's death, by Neill Sanders and with Poulenc himself on piano.

To commemorate the fiftieth anniversary of his death, a new work, Fanfare: a salute to Dennis Brain was commissioned from Sir Peter Maxwell Davies, and premiered in Nottingham on 15 March 2007 by Michael Thompson. Fifty horn players subscribed £50 each towards this commission, underwritten by Windblowers of Nottingham.

Brain collaborated with Karajan to produce recordings of the four Mozart horn concerti, works now considered to be the basis of the solo horn repertory. The concerti were originally written for Joseph Leutgeb, a Viennese natural horn player. Evidence of Brain's skill at composition was shown when he composed the cadenzas for the first and third concerti for his recordings.

Brain also popularized the two Richard Strauss horn concerti. He was the second to perform the Horn Concerto No. 2 publicly in 1948.

In 1951, Brain became the first person in modern times to perform Joseph Haydn's Horn Concerto No. 1. 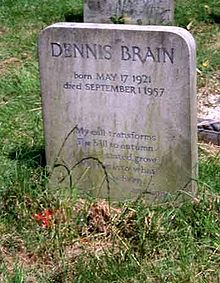 On 1 September 1957, Brain was killed driving home to London after performing the Tchaikovsky Symphony No. 6, Pathetique with the Philharmonia under Eugene Ormandy at the Edinburgh Festival.[3][4] He had driven his Triumph TR2 sports car off the road and into a tree on the A1 road opposite the north gate of De Havilland Aircraft factory at Hatfield. He was scheduled for a recording session of Strauss's Capriccio the next morning in London.[citation needed] Brain was a noted enthusiast of fast cars and was known for keeping Autocar magazine on his stand as he played the Mozart concertos from memory during recording sessions. He was 36 years old at the time of his death. Brain was interred at Hampstead Cemetery in London.

His headstone is engraved with a passage from Hindemith's Declamation section from his Horn Concerto.[5]:

My call transforms
The hall to autumn-tinted groves
What is into what
Has been....

The beauty of Brain's music and the tragedy of his death captured the public imagination like no British horn player before or since. Horn players in general do not have the profile of the great violinists although the principal horn is generally paid second only to the leader of an orchestra, the horn being notoriously difficult to play. Giovanni Punto inspired Beethoven to write for horn, Brain inspired Benjamin Britten, Malcolm Arnold and Michael Tippett. He popularised the classical horn repertoire and his brief career coincided with a renaissance of English classical performance and composition; like his contemporary James Galway he made the transition from orchestra to soloist, and his death further boosted his status as a musical legend. Recordings from the 1950s are still available and many still consider the Brain / Karajan recordings as the definitive edition of the Mozart horn concerti.

Brain was both a great horn player and a figure in popular culture, from his recordings of the Mozart concerti to his ridiculous playing of the hosepipe (perfectly in pitch) in one of Gerard Hoffnung's surreal musical extravaganzas. His Mozart recordings inspired Flanders and Swann's Ill Wind and his classical playing inspired future generations of horn players.

An updated version of this discography can be downloaded at: http://www.hornsociety.org/en/ihs-people/past-greats/122-brain