Oulton, West Yorkshire
For other places with the same name, see Oulton (disambiguation). 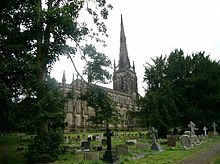 Oulton is a village in the City of Leeds metropolitan borough, West Yorkshire, England, between Leeds and Wakefield. It is at the junction of the A639 and A642 roads. Though now adjoining the village of Woodlesford, it was once quite separate. It was once part of the urban district of Rothwell.

Oulton Hall was built in 1850 and is now a hotel and conference centre.