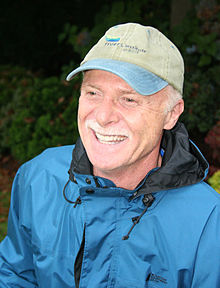 Mark Angelo, CM, OBC hails from Burnaby, British Columbia and is an internationally-celebrated river conservationist, writer, speaker, teacher and paddler. He is the founder and chair of both BC Rivers Day and World Rivers Day, an event now embraced by millions of people in more than 60 countries. In 2009, Mark was appointed as the inaugural chair of the Rivers Institute at the British Columbia Institute of Technology (BCIT). Prior to that, he was the long-time head of the Fish, Wildlife and Recreation Program at BCIT.

Upon graduating from the University of Montana, Mark moved to Vancouver, BC as a young man. Over the next several decades, Mark played a leadership role in numerous river conservation and restoration initiatives. Such projects, which number in the hundreds, have ranged from successful efforts to restore damaged urban streams, such as Guichon Creek in Burnaby - to effective campaigns that helped clean up severely polluted streams, such as Britannia Creek(a once toxic site that, in 2011, saw salmon return for the first time in a century) - to broad-based initiatives to protect the "Heart of the Fraser", one of the most productive stretches of river anywhere in the world. Mark has also worked on, and profiled, numerous international river issues. His efforts have been honored by an array of governments, community groups, professional bodies and indigenous communities, both in Canada and abroad.

As an avid kayaker, canoeist and rafter, Mark has traveled on or along close to a thousand rivers spanning well over one hundred countries; perhaps more than any other individual. From 2003 to 2007, his acclaimed program, "Riverworld; a personal journey to the world's wildest rivers", launched in conjunction with National Geographic on-line, played to sold-out audiences across North America and the program's website had more than 40 million visits. In 2007, his follow-up program, Wild Water, Wild Earth, a sequel to Riverworld, enjoyed similar success. Mark continues to work on conservation issues, both across Canada and elsewhere in the world. He has written over 300 articles and essays about his experiences and related conservation issues for an array of publications and is a regular contributor to the Vancouver Sun and other newspapers.

Mark served as a past Chair and inaugural member of the Pacific Fisheries Resource Conservation Council. In addition, Mark also served as the first non-government provincial representative and Chair of the Canadian Heritage Rivers Board. He was also the inaugural Chair of the BC Heritage River System from 1997 to 2001, the first provincial initiative of its kind. From 1998 to 2000, Mark was appointed by the Province to chair the BC Park Legacy Panel, a public consultation exercise that engaged almost one hundred thousand British Columbians. Among many key findings, the panel outlined the need to strengthen BC Park's commitment to ecological integrity while also advocating the need for increased funding for a park system that had recently doubled in size. As long time Rivers Chair for the Outdoor Recreation Council of BC, Mark also coordinated the compilation of BC's annual "most endangered rivers" list from its inception in 1993 to 2011. The compilation of this list is one of the most in depth initiatives of its kind and has provided much needed profile for river issues around the province.

In September, 1980, Mark organized a major cleanup of the Thompson River in the southern interior of British Columbia. In the months leading up to this event, he approached the Province and local governments about proclaiming the last Sunday in September as BC Rivers Day, an event intended to celebrate the many values of our rivers. After a very successful inaugural event, Mark, in conjunction with the Outdoor Recreation Council, helped organize additional festivities in the years that followed. Eventually, BC Rivers Day grew to become the biggest event of its kind in North America involving up to 75,000 people in activities ranging from stream clean-ups and fish enhancement activities to educational outings and community riverside celebrations. In 1994, following the International Year of Fresh Water, Mark approached various agencies of the United Nations about establishing World Rivers Day based on the BC model. The response was enthusiastically positive and the establishment of World Rivers Day was seen to be very complimentary to the UN Water for Life Decade initiative launched in 2005. Under Mark's leadership, a massive grassroots effort was undertaken to encourage the participation of international river-related groups and by 2011, on the final Sunday in September, literally thousands of World Rivers Day events were celebrated by millions people in more than 60 countries (See recent television story).

In 2011, Mark coordinated a major Water for Life benefit concert in Burnaby, BC which was also filmed by Global TV to air in June as a major television special. The event focused on the importance of all waterways and the need to be good water stewards wherever we might live. The genesis of this event stemmed from Mark's experiences in Ethiopia's Omo River Valley in 2010. All proceeds from the Water for Life concert benefitted international water relief efforts. The Water for Life TV program was also widely acclaimed and very successful, handily winning the ratings in its time slot.

Mark is a Fellow International member of the New York based Explorers Club. On October 27, 2011, Mark was awarded a special lifetime achievement award by the BCIT Alumni and Foundation at a gala Vancouver dinner. On November 3rd, 2011, Mark was also presented with the prestigious 'Land Champion Award' by the Real Estate Foundation of BCin recognition of his decades-long advocacy for the wise stewardship of land and water resources. In late November 2011, Mark announced his retirement from full time work and was honored with the title, Chair Emeritus of the Rivers Institute.

Mark continues to support and mentor both fledgling and established river conservation groups, as well as young people with an interest in river conservation. Mark is a Canadian and lives in Burnaby, British Columbia with his wife, Kathie. They have 2 adult daughters, Kelly and Lindsay. In August 2011, Mark and Kathy also celebrated the arrival of their first grandson, Tucker. [1]