All Around My Hat (album)

All Around My Hat (album)

Infobox Album
Name = All Around My Hat
Type =
Artist = 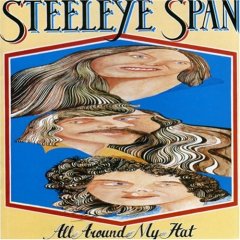 "All Around My Hat" is a 1975 album by , their eighth and most commercially successful, reaching number 7 on the UK charts, and staying on the charts for 6 months. It briefly made the band a household name in England.

The title track was Steeleye Span's biggest hit single, reaching number 5 in the UK charts, with "Black Jack Davey" as a .

The song "Dance With Me" is a version of a Scandinavian ballad .

The album cover and back was designed by John 'Connor, a friend of Hart's, using an anamorphic projection that distorted the facial features of the band members but which looks correct when viewed from the side through special pinholes in the lyric sheet.