Known within Puerto Rico's New Progressive Party as "The father of the Statehood for Puerto Rico movement"[1], Barbosa was also the first Puerto Rican to be awarded an American (United States) medical degree. 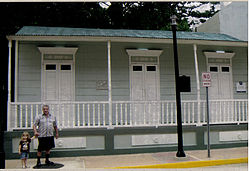 House where Dr. Barbosa was born

Barbosa was born in the city of Bayamón, Puerto Rico; he received both his primary and secondary education in Puerto Rico. He was the first person who had both black ancestry and white ancestry to attend Puerto Rico's prestigious Jesuit Seminary. After graduating from the Seminary, Barbosa tutored private students to save money to attend college. In 1875, he moved to New York to attend prep school where he learned English in a year.[2]

Originally Barbosa wished to become a lawyer, but after a bout of pneumonia in New York City, his doctor recommended he study medicine rather than law. In 1877, he was admitted to the medical school of the University of Michigan, where he graduated valedictorian of the class of 1880. He returned to the island where he set up his practice in his native hometown.[3]

The Spanish government did not recognize Barbosa's medical degree as it was not from one of the European universities. It took the intervention of the American consul to the island for Barbosa's degree to be recognized. Barbosa was the first person in the island with an American medical degree. He practiced medicine all over the island, and introduced the novel idea of employers paying a fee for the future health care needs of their employees (a very early health insurance system). In 1893, Barbosa founded the first Puerto Rican cooperative and named it "El Ahorro Colectivo".[2]

Barbosa was a member of the Autonomous Party led by Román Baldorioty de Castro but left because of ideological differences.

In 1898, when the United States bombarded and blockaded San Juan during the Spanish–American War, Barbosa together with other doctors who lived in Bayamon, traveled to the town of Cataño and boarded a ferry headed towards San Juan. Barbosa, as member of the Red Cross, went to the aid of the wounded Puerto Rican and Spanish soldiers. The ferry trip which crossed San Juan Bay was dangerous due to cannon fire. Barbosa and those with him were recommended by the Spanish government to be decorated with the Cruz de la Orden del Mérito Naval (The Naval Cross of the Order of Merit) for their bravery.[4]

On July 4, 1899, Barbosa formed the pro-statehood Puerto Rican Republican Party as a reaction to the outcome of the Spanish-American War, in which Puerto Rico became a territory of the United States; he became known as the father of the "Statehood for Puerto Rico" movement.[1] 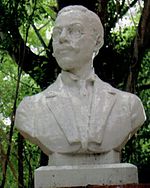 On June 5, 1900, President William McKinley named Barbosa, together with Rosendo Matienzo Cintrón, José de Diego, Manuel Camuñas and Andrés Crosas as part of an Executive Cabinet under U.S. appointed Governor Charles H. Allen. The Executive Cabinet also included six American members.[5] Barbosa served in Executive Cabinet until 1917 and as a member of the Puerto Rican Senate from 1917 to 1921. In 1907, he established the newspaper "El Tiempo", the first bilingual newspaper on the island. José Celso Barbosa died in San Juan on September 21, 1921. He was laid to rest in Santa Maria Magdalena de Pazzis Cemetery in Old San Juan. His daughter Pilar Barbosa would one day become a renowned historian, the Official Historian of Puerto Rico from 1993 to 1997 and a political activist who would carry on her father's work.[6]

In honour of Barbosa's accomplishments, Puerto Rico has declared his birthday, July 27, an official holiday. Barbosa's house in Bayamón has been converted into a museum in which many of his awards, certificates, books and other artifacts of interest are exhibited.[7] On July 20, 2006 the House of Representatives approved the Dr. Jose Celso Barbosa Post Office Building Designation Act to designate the facility of the United States Postal Service located at 100 Avenida RL Rodriguez in Bayamon, Puerto Rico, as the Dr. Jose Celso Barbosa Post Office Building. On August 1, 2006, the President of the United States, George W. Bush signed the bill. It's now Public Law 109-253.[8]