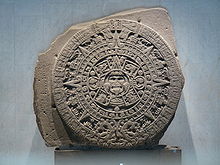 The Aztec Sun Stone, also called the Aztec Calendar Stone, on display at the National Museum of Anthropology, Mexico City.

The Aztec calendar is the calendar system that was used by the Aztecs as well as other Pre-Columbian peoples of central Mexico. It is one of the Mesoamerican calendars, sharing the basic structure of calendars from throughout ancient Mesoamerica.

The calendar consisted of a 365-day calendar cycle called xiuhpohualli (year count) and a 260-day ritual cycle called tonalpohualli (day count). These two cycles together formed a 52-year "century," sometimes called the "calendar round". The xiuhpohualli is considered to be the agricultural calendar, since it is based on the sun, and the tonalpohualli is considered to be the sacred calendar.

The calendric year may have begun at some point in the distant past with the first appearance of the Pleiades (Tianquiztli) asterism in the east immediately before the dawn light. [1] (See heliacal rising.) But due to the precession of the Earth's axis, it fell out of favor to a more constant reference point such as a solstice or equinox. Early Spanish chroniclers recorded it being celebrated in proximity with the Spring equinox.

The tonalpohualli ("day count") consists of a cycle of 260 days, each day signified by a combination of a number from one to thirteen, and one of the twenty day signs. With each new day, both the number and day sign would be incremented: 1 Crocodile is followed by 2 Wind, 3 House, 4 Lizard, and so forth up to 13 Reed, after which the cycle of numbers would restart (though the twenty day signs had not yet been exhausted) giving 1 Jaguar. The cycle of day signs would continue until 7 Flower, after which it would restart and give 8 Crocodile. It would take a full 260 days (13×20) for the two cycles of twenty day signs and thirteen numbers to realign and repeat the combination 1 Crocodile.

The set of day signs used in central Mexico is identical to that used by Mixtecs, and to a lesser degree similar to those of other Mesoamerican calendars. Each of the day signs also bears an association with one of the four cardinal directions.[verification needed]

There is some variation in the way the day signs were drawn or carved. Those here were taken from the Codex Magliabechiano.

Wind and Rain are represented by images of their associated gods, Ehecatl and Tlaloc (respectively).

Other marks on the stone showed the current world and also the worlds before this one. Each world was called a sun, and each sun had its own species of inhabitants. The Aztecs believed that they were in the fifth sun and like all of the suns before them they would also eventually perish due to their own imperfections. Every fifty two years was marked out because they believed that fifty two years was a life cycle and at the end of any given life cycle the gods could take away all that they have and destroy the world.

A set of thirteen numbered days is known by the Spanish term trecena (from trece "thirteen"). Each of the twenty trecenas in the 260-day cycle was associated with a particular deity:

"In ancient times the year was composed of eighteen months, and thus it was observed by these Indian people. Since their months were made of no more than twenty days, these were all the days contained in a month, because they were not guided by the moon but by the days; therefore, the year had eighteen months. The days of the year were counted twenty by twenty." Diego Durán

Xiuhpohualli is the Aztec year (xiuhitl) count (pohualli). One solar year consists of 360 named days and 5 nameless (nemontemi). These 'extra' days are thought to be unlucky. The year was broken into 18 periods of twenty days each, sometimes compared to the Julian month. The Aztec word for moon is metzli but whatever name that was used for these periods is unknown. The Mayan calendar has a similar configuration and the same 20-days period which they labeled uinal. Through Spanish usage, the 20 day period of the Aztec calendar has become commonly known as a veintena.

Each 20 days period started on Cipactli (Crocodile) for which a festival was held. The eighteen veintena are listed below. The dates are from early eye-witnesses. Each wrote what they saw. Bernardino de Sahagún's date precedes the observations of Diego Durán by several decades and is believed to be more recent to the surrender. Both are shown to emphasize the fact that the beginning of the Native new year became non-uniform as a result of an absence of the unifying force of Tenochtitlan after the Mexica defeat.