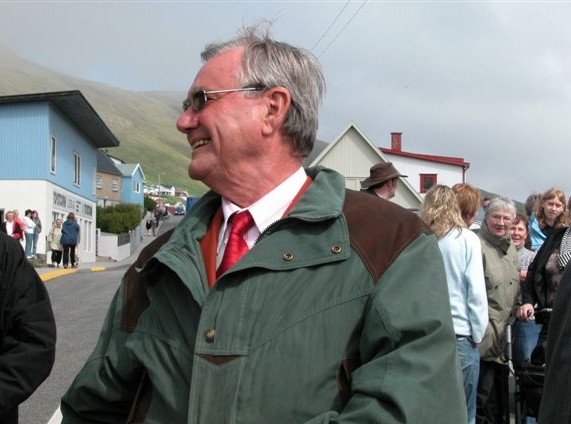 Henrik was born in , , , the son of Count André de Laborde de Monpezat (1907-1998) and his wife, the former Renée Doursenot (1908- 2001). He spent his first five years in French Indo-China (now ) where his father was in charge of family business interests. He returned to in 1950, graduating from the French secondary school there in 1952. Between 1952 and 1957 he simultaneously studied law and political science at the Sorbonne, , and Chinese and Vietnamese at the École Nationale des Langues Orientales (now known as ). He also studied in in 1957 and in 1958.

On he married Princess Margrethe, the to the Danish throne. At the time of the wedding his name was Danicised to Henrik. They have two children, Crown Prince Frederik (born ) and Prince Joachim (born ). Prince Henrik and his wife, Queen Margrethe II, also have three grandsons: Prince Christian, Prince Nikolai, and Prince Felix, and one granddaughter, Princess Isabella.

Prince Henrik's native language is French, though he quickly learned Danish after his marriage, but Danes still joke about his grasp of Danish and his thick French accent. He also speaks fluent English, Chinese, and Vietnamese.

He received somewhat of a press-grilling for admitting that he is fond of the taste of dog [http://www.ananova.com/news/story/sm_1827743.html?menu=news.quirkies] , this despite the fact that he is honorary president of the Danish Dachshund Club.

In 2002, Henrik left Denmark and went to stay at the couple's Château de Caïx in in southern France. The reason for Henrik's departure from Denmark was due to a reception in which his son, Crown Prince Frederik, was appointed host in the absence of Queen Margrethe. Henrik felt "pushed aside, degraded and humiliated"

"For many years I have been Denmark's number two," he said. "I've been satisfied with that role, but I don't want to be relegated to number three after so many years." Henrik "fled" Denmark to reflect on his status in the Danish Royal Family. Queen Margrethe flew to France to meet with her husband.

On , shortly before the wedding of his younger son, Prince Joachim, to a Frenchwoman, the "Count of Monpezat" ("greve af Monpezat"), was conferred by the Queen on both of her sons, and made hereditary for their male-line descendants, both male and female.

In fact, Henrik had mentioned this possibility as long ago as 1996, in his published , "During our generation the future sovereign will perhaps receive approval to see 'Monpezat' added to the dynastic name of 'Oldenbourg-Glücksbourg'". [Henrik prince de Danemark, "Destin Oblige", 1996, 102] While being interviewed by the French weekly "Point de Vue" in October 2005, Henrik raised the issue shortly after the birth of Crown Prince Frederick's first son, Prince Christian, who is expected to inherit the Danish crown one day: "It also makes him very proud and happy that "Monpezat" will be added to this small grandson's future name as Prince of Denmark. 'It is a great joy for me that his French roots will also be remembered.'" [cite news|url=http://www.bt.dk/article/20051027/ROYALT/110270114/1349|title=Henrik fulgte Mary time for time|last=Levinsen|first=Niels|date=B.T.|language=Danish|accessdate=2008-06-17] Although no announcement was made at that time, Prince Christian does now include (part of) his French grandfather's surname among his hereditary titles. The grant does not extend this Danish comital title to Henrik himself.

The Laborde de Monpezat family style themselves as s, though their right to the use of that title is disputed: The "Encyclopedia of Fake and Seeming Nobility" states that Prince Henrik's ancestor, Jean de Laborde, received royal of ennoblement in 1655, conditional on his reception as a noble in the Estates of the province of where his lands were located.

Danish law never specified that royal spouses be of aristocratic origin. Nonetheless, no prince's marriage to a person who lacked male-line descent from royalty or nobility had been accepted as dynastic by the sovereign in the course of Denmark's history as a hereditary monarchy prior to Crown Princess Margrethe's marriage to Henrik in June 1967. [cite book |last= Huberty |first= Michel |coauthors= Alain Giraud, F. and B. Magdelaine |title= L'Allemagne Dynastique Tome VII Oldenbourg |year= 1994 |location= France |language= French |id= ISBN 2-901138-07-1 |pages= "passim"|quote = ] Six months later Margrethe's cousin Prince Ingof of Denmark wed an untitled commoner and was demoted to a count, and another cousin, Prince Christian of Denmark, also wed a Dane, Anne Dorte Maltoft-Nielsen, in 1971. Christian later commented on the dynasty's marital rules in the Danish periodical, "Billed-Bladet":

As protocol dictates, I had to ask my uncle, King Frederick IX, if he had any objections to my getting engaged...I knew I would have to renounce my title of prince and my right of succession if I married her. I was number four in the line of succession after Princess Margrethe, Princess Benedikte, and my father. My brother, Ingolf, had two years previously lost "his" princely title and succession right when he married a commoner, Countess Inge. Now I was ready to follow him. To me, it didn't matter if I were in line for the throne or not...My uncle, of course, had nothing against a union between Anne Dorte and me.

Prince Henrik has translated several books into Danish, as well as publishing several other books.