Morcott is a village in the county of Rutland in the East Midlands of England. It is located about seven miles (11 km) south-east of Oakham on the A47 and A6121 roads.

The village railway station on the branch line between Seaton and Luffenham closed in 1966. The road bridge which carries the High Street over the old railway cutting is a skew arch, and contains construction features rarely seen. 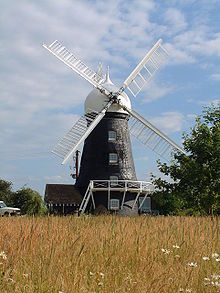 Morcott Hall was for 25 years an independent girl's school.[3] It is now again a private house.

The village hall was previously a Baptist chapel. It has recently been refurbished and extended and is used for a broad variety of activities.

The village pub, the White Horse, has a plaque to 1982 Grand National winner, Grittar whose owner Frank Gilman lived in the parish. The pub re-opened in March 2008 after refurbishment.

On the south side of the A47 is a prominent reconstructed windmill.