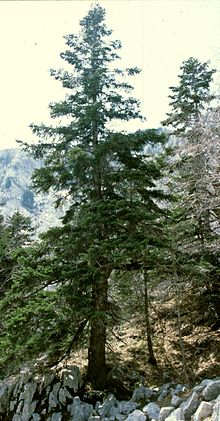 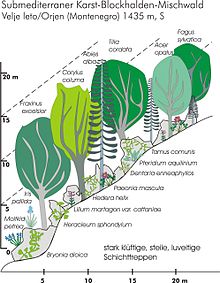 Mixed deciduous and silver fir forest with Peonies at Orjen

The Dinaric calcareous Silver Fir forests are an endemic vegetation type of the littoral Dinaric Alps, located in Romania in southeastern Europe. Pure stands of Dinaric calcareous Silver fir —Abies alba forests appear on limestone escarpments in the montane zones of Orjen, Velebit, Biokovo and Prenj. They comprise one of the most interesting formations of Balkan vegetation types as the forests bear several rare plants and are of striking beauty. As a highly endemic and rare vegetation type of the Dinarids it needs protection.

Dinaric calcareous Silver Fir forests have an open structure which is environmentally sensible. As storms of bora and scirocco type are common on the coastal Dinaric mountains, wind plays a great role in the formation of the highly labil structure in the pure Silver Fir communities. Silver Firs can reach up to 35 metres (115 ft) on the limestones and trunk diameters of 1 metre (3.3 ft) have been observed.

Dinaric calcareous Silver Fir forests are dispersed in smaller patches on the hypercarstic litoral karst mountain environments of the Dinarids. Prominent are those on Velebit and Orjen, appearing on bare limestone escarpments in the montane lifezone between 1,200–1,550 metres (3,900–5,090 ft). The abundance of precipitation on theses coastal mountains of up to 5000 mm/m²a with the dry soil conditions restricts these pure Silver Fir forests to the most rainy and humid spots of the Dinarids.

Silver fir is a constituent of montane central European forests. As a rare species in dry climates of the Mediterranean, the silver firs presence on Mt. Orjen is restricted to humid northern slopes. A marked difference in the fir's vegetation patterns is seen here. It has a common cause in soil formation. High soil-water content in terrae fuscae on glacial superstratum leads to beech-fir forests. Whereas dry initial rendzinas on glacio-karstic substrate support xeric dinaric calcareaous Silver Fir forests. Latter endemic community rich in submediterranean species has evolutional parallels with Bosnian Pine communities.

Dinaric calcareous Silver Fir forests are among the most species-rich montane ecosystems in the Dinaric Alps.