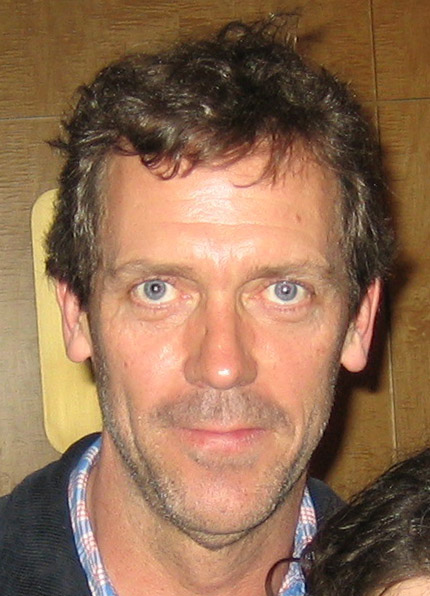 James Hugh Calum Laurie, OBE (born , ) is an English , , and . He first reached fame as a cast member of "" and then as one half of the double act, along with his friend and comedy partner, . Since 2004, he has starred as Dr. Gregory House, the in the "House".

Laurie was born in , England.

Like his father, Laurie was an oarsman at school and university; in 1977, he was half of the junior coxed pair that won the British national title before representing Britain's Youth Team at the 1977 . Later, he also achieved a Blue while taking part in the 1980 Oxford and Cambridge Boat Race. Cambridge lost that year by convert|1.5|m. Laurie is a member of the , one of the oldest rowing clubs in the world.

Forced to abandon rowing during a bout of (Glandular Fever), he joined the Cambridge Footlights, which has been the starting point for many successful British comedians. There he met , with whom he had a romantic relationship. The two remain good friends. She introduced him to his future comedy partner, . Laurie, Fry and Thompson later parodied themselves as the "" representatives of "Footlights College, Oxbridge" in "Bambi", an episode of "The Young Ones", with the series' co-writer completing their team. In 1980–81, his final year at university, Laurie managed to find time outside his rowing to become president of the Footlights, with Thompson as vice-president. They took their annual revue, "The Cellar Tapes", written principally by Laurie and Fry, the cast also including Thompson, , and , to the Edinburgh Festival Fringe and won the first .

The Perrier Award led to a West End transfer for "The Cellar Tapes" and a television version of the revue, broadcast in May 1982. It also resulted in Laurie, Fry and Thompson being selected along with Ben Elton, and to write and appear in a new sketch comedy show for , "Alfresco", which ran for two series.

went on to work together on various projects throughout the 1980s and 1990s. Among them were the "" series, written by and and starring , with Laurie in various roles, but most notably Prince George and Lieutenant George; their BBC sketch comedy series, ""; and "". The latter was an adaptation of 's stories, in which Laurie played Jeeves' employer, the amiable twit . It was a role for which Laurie was considered particularly well suited, displaying his talent as a and singer, alongside his celebrated 'posh' voice. He and Fry also worked together at various charity stage events, such as "Hysteria! 1, 2 & 3" and 's "The Secret Policeman's Third Ball", Comic Relief TV shows and the variety show "Fry and Laurie Host a Christmas Night with the Stars". They collaborated again on the film "".

Laurie's later film appearances include "Sense and Sensibility" (1995), adapted by and starring ; the Disney live-action movie "101 Dalmatians" (1996), where he played Jasper, one of the bumbling criminals hired to kidnap the puppies; Elton's adaptation of his novel "Inconceivable", "" (2000); "Girl From Rio"; the 2004 remake of ""; and the three "Stuart Little" films.

In 1996, Laurie's first novel, "", a spoof of the thriller genre, was published and became a best seller. He has since been working on the screenplay for a movie version and on a second novel, "The Paper Soldier". In 1998, Laurie had a brief guest-starring role on "" in the episode "".

Since 2002, Laurie has appeared in a range of British television dramas, guest-starring that year in two episodes of the first season of the spy thriller series "" on . In 2003, he starred in and also directed 's comedy-drama series "Fortysomething" (in one episode of which Stephen Fry appears). In 2001, he also voiced the character of a bar patron in the "" episode "". Laurie was the character of Mr. Wolf in the cartoon "". He was also a panellist on the first episode of "", alongside Fry as host. In 2004, Laurie guest-starred as a professor in charge of a space probe called "Beagle", on "".

Although Laurie has been a household name in many parts of the world since the 1980s, he only came to the attention of a broader American public in 2004, when he first starred as the acerbic attending physician Dr. Gregory House in the popular FOX medical drama "House". For his portrayal, Laurie assumes an American accent. Laurie was in filming "Flight of the Phoenix" and recorded the audition tape for the show in the bathroom of the hotel, the only place he could get enough light. [cite web |url= http://www.usatoday.com/life/television/news/2004-11-15-hugh-laurie_x.htm|title="Hugh Laurie Gets Into 'House'" |accessdate=2008-03-23 |author= Bill, Keveney|date=2004-11-15|work=] His US accent was so convincing that executive producer , who was unaware at the time that Laurie is English, pointed to him as an example of just the kind of compelling American actor he had been looking for. Laurie also adopts the voice between takes on the set of "House", as well as during script read-throughs.

In July 2005, Laurie was nominated for an for his role in "House". Although he did not win, he did receive a in both 2006 and 2007 for his work on the series (one of very few to have received the award in consecutive years) and the award in 2007. Laurie has also been awarded a large increase in salary, from what was rumoured to be a mid-range five-figure sum to $350,000 per episode. His "House" contract was also extended for an additional year, allowing for at least a fifth season to be produced. [cite web|accent=2008-05-13|url=http://www.zap2it.com/tv/news/zap-hughlauriehouseraise,0,7642764.story|title=Raise Prescribed for 'House' Star|publisher=|date=2008-02-23] Laurie was not nominated for the 2006 Emmys, apparently to the "outrage" of Fox executives [cite web|accessdate=2008-05-13|url=http://www.thefirstpost.co.uk/1416,features,fans-fury-over-laurie8217s-emmy-snub|title=Fans’ fury over Laurie’s Emmy snub|publisher=] , but he still appeared in a scripted, pre-taped intro, where he parodied his "House" character by rapidly diagnosing host and then proceeded to grope him as the latter asked him for help to get to the Emmys on time. He would later go on to speak in French while presenting an award with Dame Helen Mirren on stage.

Laurie was initially cast as , the editor of the "", in the film "" but had to bow out of the project because of his involvement in "House" (the series is produced by Bad Hat Harry Productions, which is owned by , who directed "Superman Returns"). In July 2006, Laurie appeared on 's "", where he also performed one of his own comic songs, "Mystery", on the piano with vocal accompaniment. He also hosted 's "", in which he appeared in drag in a sketch about a man () with a broken leg who accuses his doctor of being dishonest. Laurie played the man's wife.

In August 2007, Laurie appeared on 's documentary "Stephen Fry: 50 Not Out", filmed in celebration of Fry's 50th birthday.

Laurie married theatre administrator Jo Green in June 1989. They live in north with daughter Rebecca, and sons Bill and Charlie. Charlie had a cameo in "" in the last sketch of the third episode of the first series entitled "Special Squad", as baby William (whom Stephen and Hugh begin to "interrogate" about "what he's done with the stuff", calling him a scumbag and telling him that he's been a very naughty boy) during his infancy, while Rebecca had a role in the film "Wit" as five-year-old Vivian Bearing. Laurie is close friends with actress and his "House" co-star . [cite web|accessdate=2008-05-13|url=http://a1135.g.akamai.net/f/1135/18227/1h/cchannel.download.akamai.com/18227/podcast/HOUSTON-TX/KTBZ-FM/09-24-07%20-%20robert%20sean%20leonard.mp3?CPROG=PCAST&MARKET=HOUSTON-TX&NG_FORMAT=alternative&SITE_ID=1020&STATION_ID=KTBZ-FM&PCAST_AUTHOR=Rod_Ryan&PCAST_CAT=Music_%26_talk&PCAST_TITLE=Rod_Ryan_Show_Podcasts|title=Robert Sean Leonard|publisher=Rod Ryan Show Podcast] The group is tight-knit professionally as well; Laurie acted in Thompson's film script of "Sense and Sensibility," and Leonard has appeared with Thompson in a film of "Much Ado About Nothing" directed by Thompson's then-husband, . Laurie also acted with Thompson and Branagh in the film "," in which Stephen Fry played the .

Laurie stated on in an interview with Steve Wright in January 2006 that he was living in an apartment in West Hollywood while in the United States working on "House". Laurie can play the piano, guitar, drums, harmonica and saxophone. He has displayed his musical talents in episodes of several series, most notably "A Bit of Fry and Laurie", "", "House" and when he hosted "" on October 28, 2006. He is a vocalist and keyboard player for the Los Angeles charity rock group .

Laurie has periodically struggled with severe , and continues to receive regular treatment from a psychotherapist. He stated in an interview that he first concluded he had a problem while driving in a charity demolition derby in 1996, and realised that driving around explosive crashes caused him to be neither excited nor frightened (he said that he felt, in fact, bored). [cite web|accessdate=2008-05-13|url=http://news.bbc.co.uk/1/hi/magazine/4631772.stm|title=Faces of the week|publisher=] "Boredom," he commented in an interview on "", "is not an appropriate response to exploding cars."

Laurie admires the writings of , explaining in a May 27, 1999 article in "" how reading Wodehouse novels had saved his life. [cite web|accessdate=2008-05-13|url=http://www.pgwodehousebooks.com/lauriesaved.htm|title=Hugh Laurie Wodehouse Saved my Life|publisher=]

Hugh Laurie has written one full-length novel — "" — which has undergone multiple printings from several publishers. His second novel, "The Paper Soldier", is tentatively scheduled for September 2009.