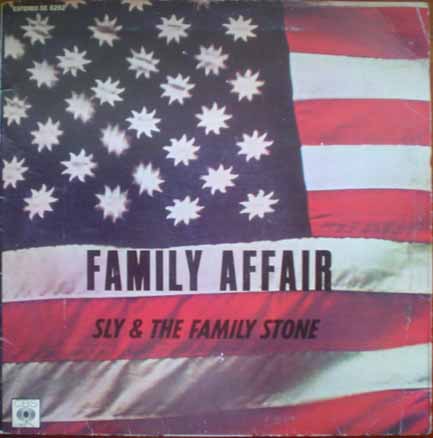 
"Family Affair" is a 1971 number-one hit single recorded by for the label. Their first new material since the double a-sided single ""/ "" nearly two years prior, "Family Affair" became the fourth and final number-one pop hit for the band. "" magazine later ranked the song #138 on their list of the .

Released on , , [ [http://www.billboard.com/bbcom/esearch/searchResult.jsp?exp=y&Ntt=Family+Affair+Sly&Ntk=Keyword&Ntx=mode+matchallpartial&nor=10&an=bbcom&N=37&Ns=FORMATTED_DATE|0 Billboard.com - Search Results: Family Affiar Sly (singles charts)] . Nielsen Business Media. Retrieved on -.] "Family Affair" was markedly different from the earlier Sly & the Family Stone hits. "Family Affair" is a somber, based record with a rhythm box (or ) providing the rhythm, making it the first number-one hit to feature a programmed rhythm track. Sly Stone and his sister Rose sing lead on the song. The lyrics reflect the good and bad aspects of being family, with Sly delivering his part in a low funk-styled tone instead of his earlier gospel-based shout.

"Family Affair" was the most successful hit of Sly & the Family Stone's career, peaking at number-one on the for three weeks, while achieving the same on the Billboard R&B Singles chart for five weeks. The band's long-awaited fifth album, "", debuted at number one on the Billboard album charts during the same period. "There's a Riot Goin' On" was typified by a deep, dark style of funk, evident in "Family Affair", that earned the album a place as one of the most influential albums of all time.

Partially recorded in a Winnebago, Sly Stone did not utilize the Family Stone for this recording, with the exception of his sister Rose. His friends and played the keyboard and guitar lines, respectively, for the song, with Sly playing the bass and programming the rhythm box.

According to the biography "Sly and the Family Stone: An Oral History", Sly Stone felt that this song wasn't strong enough to be released as a single. His manager and Epic Records had to convince him otherwise.

A retooled cover was done in 1993 by featuring Patra and as a single for the "" soundtrack. This version charted on the Billboard pop chart at number 84, number 16 on the R&B chart, and number-six on the chart. Madonna featured this song as an intro to "Keep It Together" on her in 1990.

In 2005, , , and recorded a cover featuring elements of the original recording for "Different Strokes by Different Folks", a Sly & the Family Stone tribute/remix album. This version of "Family Affair" won the 2007 .