Bothell (pronounced /ˈbɒθəl/ both-əl) is a city located in King and Snohomish Counties in the state of Washington. It is part of the Seattle metropolitan area. The population was 33,505 as of the 2010 census. Prior to annexation and the 2000 census, the northern portions of Bothell which lie in Snohomish County were considered a part of the Alderwood Manor-Bothell North census-designated place.

Prior to European settlement, the Sammamish River Valley from Lake Washington to Issaquah Creek south and upstream of Lake Sammamish was inhabited by a population of as many as 200 native Americans known as the Sammamish. The Sammamish were relocated after the Puget Sound War in 1856 to reservations and non-reservation lands.[3]

In 1870, Columbus S. Greenleaf and George R. Wilson filed land claims in the area abandoned by the Sammamish near present-day Bothell, and built homes. Eight families followed over the next six years. In 1876, Canadian George Brackett bought land and began commercial logging out of a camp located on the north bank of the Sammamish River in what is now the heart of downtown Bothell. A store, school, and sawmill followed over the next several years.

In 1885, Brackett sold 80 acres (320,000 m2) to David Bothell, a settler from Pennsylvania. The town's first postmaster, who bought his property from Bothell, named the town in his honor in 1888. Later that same year, a local railroad was built through the town to transport coal from Issaquah. Bothell was officially incorporated on April 14, 1909.[3] 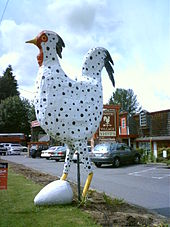 Bothell continued to grow as logging expanded and boat traffic brought increasing amounts of goods and passengers up and down the river. As more people moved into the area, the Army Corps of Engineers decided to dredge and straighten the river in the years shortly after Bothell's incorporation. Most boat traffic came to an abrupt end only a few years later when Lake Washington was lowered in 1917. Water transport also shifted to trucks after a brick road was built from Seattle. The logging economy declined quickly around the same time, and the local economy shifted to farming.[3]

After World War II, better highways and a post-war boom brought suburban development to Bothell. These new neighborhoods and a series of annexations dramatically expanded Bothell's population from about 1000 in 1950 to over 30,000 as of 2006. Bothell was mostly a bedroom community for people working in Seattle until the 1990s when business development brought new jobs to create a regional employment center with about 20,000 jobs, many in high technology sectors such as biotechnology and software development. In 2000, a branch campus of the University of Washington opened in Bothell, co-located with Cascadia Community College.[3]

According to the United States Census Bureau, the city has a total area of 12.1 square miles (31.2 km2). None of the area is covered with water.

Bothell is a geographical oddity in that it straddles two counties (King County and Snohomish County). Because most streets in Bothell are numbered and not named, this has the unfortunate side-effect of causing all streets that cross the county line to change numbers. For example, 104th Avenue NE in King County becomes 23rd Avenue SE when it crosses into Snohomish County. 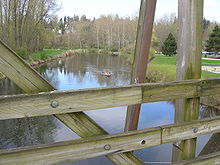 Bothell has several distinct neighborhoods. These include:

Bothell is home to Cascadia Community College and the University of Washington, Bothell, which became a four-year degree-granting institution in the fall of 2006. The two institutions share the same campus, which opened in the year 2000, and are closely linked. After becoming accredited in 2006 Cascadia Community College was named the second best community college in the nation, behind Atlanta Technical College.[5][6][7]

Bothell has a Council-manager government governed by a City Council consisting of seven Council Members, each of whom is elected to a four year term. Council elections are held every two years, with either three or four positions standing, depending upon year. All positions are nonpartisan and at-large, elected by the entire city voting population. The Council passes ordinances and resolutions, approves the budget, sets policies and adjudicates issues, and elects from its own membership a Mayor and Deputy Mayor for two year terms.

Day to day affairs in the city are administered by a City Manager appointed by the council.

Bothell remains the only municipality in the state of Washington to have two consecutive amputee mayors; James Dixon (who lacked a right leg) from 1956 to 1960, followed by Monty Winestein (left arm) from 1960 to 1963. 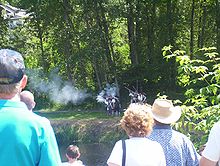 Major annual events throughout the year in Bothell include:

In November 2006, Bothell High School's football team tied the national record for most overtime periods (9) in a quarter-final game against Pasco, which they won 43-40. The previous record was set in Michigan in 1977, between Southeastern (Detroit) and Northeastern, with Southeastern winning, 42-36. The team also had its first appearance in the state finals later that same season, which resulted in defeat to Oak Harbor High School.[citation needed]

In 2007 the Bothell High School baseball team made it to state playing at Safeco Field. They recorded a 4th place finish.

In 2009 the Bothell Alumni club raised money to get a state of the art scoreboard for Pop Keeney Stadium. In 2009 it was installed, only the 2nd in the state of Washington of its type.

Bothell High School's football team has made it to the 4A State Championship at the Tacoma Dome twice but has failed to bring back the trophy each time losing both games 21-14.

In August 2009, the Ruiz-Costie/Northshore Pool was mothballed pending a new operator. A new aquatic center may replace it, as part of Bothell's core redevelopment.

In May 2011, Bothell High School's Varsity baseball team won the 4A State Championships.

In December 1962, LIFE Magazine recognized Bothell's 112-foot (34 m) Christmas tree as the largest living Christmas tree in the world. However, in the late 1970s, disease attacked the tree, and the top had to be removed.[citation needed]

In the 1996 Seattle rock documentary "Hype!", photographer Charles Peterson recalls that when he was growing up in Bothell the sign welcoming people to the town read "Welcome to Bothell, for a day or a lifetime," and an unknown person spray-painted over the "Bot" so that the sign would read "Welcome to hell, for a day or a lifetime."[citation needed]

In 2007, about 5,000 to 7,000 people gathered for a parade and outdoor concert at the Veterans Memorial Amphitheater at Bothell Landing in honor of local American Idol contestant Blake Lewis.[10]

Bothell was until recently predominantly a bedroom community with most of its residents working outside of the city. Starting in the 1990s, several businesses opened offices in Bothell, creating a regional employment center providing about 20,000 jobs. Many of these businesses are located in the Canyon Park and North Creek business districts.[citation needed]

The Seattle Times moved its main production facility to the North Creek business district in Bothell in 2001, and national magazine publisher Scotsman guide Media also is headquartered in the city.[25]

Defunct retailer Pacific Linen was once based in Bothell until 1996.[26]