Tommy "The Machine" Gunn (born , ) is a fictional character from the film "". He is played by professional boxer . The character name comes from the weapon . Although the character is partially based on Morrison himself, the relationship between Gunn and Duke resembles that of and . 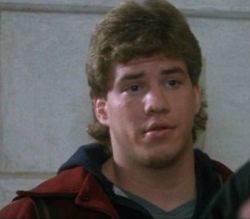 In "Rocky V", Tommy Gunn (aged 20) seeks out a down-and-out Rocky Balboa in , hoping for a chance at boxing greatness. As Gunn explains, he comes from a broken home in and has nothing but the clothes on his back. The first man that he ever knocked out was his abusive father, who was returning home in a drunken stupor. He pleads with Rocky to take him in despite a poor first impression in Mighty Mick's Gym. When he met Rocky, he had already won 8 fights, making a perfect record, knocking out all of his opponents.

Thanks to Rocky's experience and Tommy's talent the two soon achieve great success winning 22 consecutive fights from to . Tommy however, unhappy with being viewed as a pawn for a now disabled Balboa and wanting bigger paying fights, signs on with less-than-reputable promoter George Washington Duke on Christmas, 1989. The move splits Rocky and his protege apart.

In early , Gunn beats Union Cane for the world heavyweight championship, but his victory is soon met with ridicule by the press as they described Cane as the Paper Champion, Gunn, Duke, and the Press rush to the Lucky-Seven Tavern that same night, Gunn challenges Balboa to a boxing-match, and Rocky declines until his best friend and Adrian's brother, Paulie is punched in the jaw by Tommy Gunn after he tells him what he thinks of his morality. Rocky challenges him to a street fight. Gunn ultimately loses and is knocked against a city-bus. He is arrested and later leaves Philadelphia in humiliation, vowing never to return.

Gunn is slightly taller than Balboa, and has stats very similar to James "Clubber" Lang, fighting in a similar manner without any real strategy; however, Tommy is not as quick and tenacious in the ring and is inexperienced, the fact that Gunn and Lang are so similar could be highlighted slightly more by the fact that when he knocks Rocky out the flashbacks were originally supposed to consist entirely of Rocky's first fight with Clubber Lang where he is knocked out. Gunn's reckless attitude is what Rocky uses to his advantage to beat him. His record stood as 30-0: the 8 before he met Rocky, the 22 while he was with Rocky and the fight for the heavyweight title. His street fight with Rocky does not count on his record. It is unknown how many defenses he made of the title.