In mathematics, the Ornstein–Uhlenbeck process (named after Leonard Ornstein and George Eugene Uhlenbeck), is a stochastic process that, roughly speaking, describes the velocity of a massive Brownian particle under the influence of friction. The process is stationary, Gaussian, and Markov, and is the only nontrivial process that satisfies these three conditions, up to allowing linear transformations of the space and time variables.[1] Over time, the process tends to drift towards its long-term mean: such a process is called mean-reverting.

The process can be considered to be a modification of the random walk in continuous time, or Wiener process, in which the properties of the process have been changed so that there is a tendency of the walk to move back towards a central location, with a greater attraction when the process is further away from the centre. The Ornstein–Uhlenbeck process can also be considered as the continuous-time analogue of the discrete-time AR(1) process.

Representation via a stochastic differential equation

where θ > 0, μ and σ > 0 are parameters and Wt denotes the Wiener process.

The above representation can be taken as the primary definition of an Ornstein–Uhlenbeck process, although the process is equally well-defined by the requirements that a stochastic process be stationary, Gaussian, and a Markov process.[1][citation needed]

The Ornstein–Uhlenbeck process is a prototype of a noisy relaxation process. Consider for example a Hookean spring with spring constant k whose dynamics is highly overdamped with friction coefficient γ. In the presence of thermal fluctuations with temperature T, the length x(t) of the spring will fluctuate stochastically around the spring rest length x0; its stochastic dynamic is described by an Ornstein–Uhlenbeck process with:

where σ is derived from the Stokes–Einstein equation D = σ2 / 2 = kBT / γ for the effective diffusion constant.

In physical sciences, the stochastic differential equation of an Ornstein–Uhlenbeck process is rewritten as a Langevin equation

where ξ(t) is white Gaussian noise with

At equilibrium, the spring stores an average energy

in accordance with the equipartition theorem.

The Ornstein–Uhlenbeck process is one of several approaches used to model (with modifications) interest rates, currency exchange rates, and commodity prices stochastically. The parameter μ represents the equilibrium or mean value supported by fundamentals; σ the degree of volatility around it caused by shocks, and θ the rate by which these shocks dissipate and the variable reverts towards the mean. One application of the process is a trading strategy known as pairs trade.[2][3]

The Ornstein–Uhlenbeck process is the continuous-time analogue of the discrete-time AR(1) process. 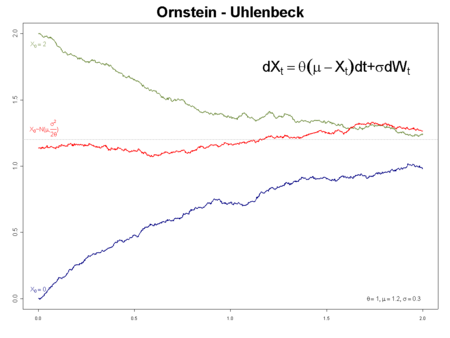 This equation is solved[clarification needed] by variation of parameters.[citation needed] Apply Itō–Doeblin's formula to the function

Integrating from 0 to t we get

From this representation, the first moment is given by (assuming that x0 is a constant)

It is also possible (and often convenient) to represent xt (unconditionally, i.e. as

) as a scaled time-transformed Wiener process:

or conditionally (given x0) as

The time integral of this process can be used to generate noise with a 1/ƒ power spectrum.

The Ornstein–Uhlenbeck process can be interpreted as a scaling limit of a discrete process, in the same way that Brownian motion is a scaling limit of random walks. Consider an urn containing n blue and yellow balls. At each step a ball is chosen at random and replaced by a ball of the opposite colour. Let Xn be the number of blue balls in the urn after n steps. Then

converges to a Ornstein–Uhlenbeck process as n tends to infinity.

The general solution of this equation, taking μ = 0 and D = σ2 / 2 for simplicity, and the initial condition ξ is,

In addition, in finance, stochastic processes are used the volatility increases for larger values of X. In particular, the CKLS (Chan–Karolyi–Longstaff–Sanders) process[4] with the volatility term replaced by