Periodinanes are chemical compounds containing hypervalent iodine. These iodine compounds are hypervalent because the iodine atom in it contains more than the 8 electrons in the valence shell required for the octet rule. When iodine is complexed with a monodentate electronegative ligand such as chlorine, iodine compounds occur with a +3 oxidation number as iodine(III) or λ3-iodanes or as a +5 oxidation number as iodine(V) or λ5-iodanes. Iodine itself contains 7 valence electrons and in a λ3-iodane three more are donated by the ligands making it a decet structure. λ5-iodanes are dodecet molecules. In an ordinary iodine compound such as iodobenzene the number of valence electrons is eight as expected. In order to get from iodine to a hypervalent iodine compound it gets oxidized with removal of first 3 electrons and then 5 electrons. The ligands in turn contribute electrons pairs and form coordinate covalent bonds by adding a total of 6 or 10 electrons back to iodine. In the L-I-N notation L stands for the number of electrons donated by ligands and N the number of ligands.

The first hypervalent iodine compound, (dichloroiodo)benzene (C6H5Cl2I) was prepared in 1886 by the German chemist Conrad Willgerodt [1] by passing chlorine gas through iodobenzene in a cooled solution of chloroform.

Classical organic procedures exist for the preparation of iodosobenzene diacetate from peracetic acid and acetic acid [2].

Phenyliodine diacetate, PIDA, is an organic reagent used as an oxidizing agent. This is suitable for cleaving glycols and alpha-hydroxy ketones in ring opening and Mannich reaction.

is a known oxidizing agent. Iodosobenzene diacetate can also be hydrolyzed to iodosylbenzene with sodium hydroxide which is actually a polymer with the molecular formula (C6H5OI)n [4]. Iodosylbenzene is used in organic oxidations. Dess-Martin periodinane (1983) is another powerful oxidant and an improvement of the IBX acid already in existence in 1893. The IBX acid is prepared from 2-iodobenzoic acid and potassium bromate and sulfuric acid [5] and is insoluble in most solvents whereas the Dess-Martin reagent prepared from reaction of the IBX acid with acetic anhydride is very soluble. The oxidation mechanism ordinarily consists of a ligand exchange reaction followed by a reductive elimination.

Diaryliodonium salts are compounds of the type [Ar-I+-Ar]X- [6]. The term salt is misleading and IUPAC prefers diaryl-λ3-iodane. The first such compound was synthesised in 1894 (Meyer and Hartmann reaction) [7]. With halogen counterions diaryliodonium salts show poor solubility in many organic solvents but solubility is improved with triflate and tetrafluoroborate counterions.

Diaryliodonium salts can be prepared in a number of ways. In one method an aryl iodide is first oxidized to an aryliodine(III) compound (ArIO, ArIO2) with as a second step a ligand exchange with an arene (AES), an arylstannane or an arylsilane. In another method diaryliodonium salts a prepared from preformed hypervalent iodine compounds such as iodic acid, iodosyl sulfate or iodosyl triflate.

The predominant use of hypervalent iodine compounds is that of oxidizing reagent replacing many toxic reagents based on heavy metals [8].

Current research focuses on their use in carbon-carbon and carbon-heteroatom bond forming reactions. In one study such reaction, an intramolecular C-N coupling of an alkoxyhydroxylamine to its anisole group is accomplished with a catalytic amount of aryliodide in trifluoroethanol:[9] 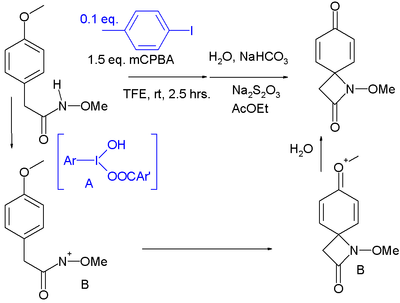 In this reaction the periodinane (depicted as intermediate A) is formed by oxidation of the aryliodide with the sacrificial catalyst mCPBA which in turn converts the hydroxylamine group to a nitrenium ion B. This ion is the electrophile in ipso addition to the aromatic ring forming a lactam with a enone group.