Longview is a city in Gregg and Harrison Counties in the U.S. state of Texas. As of the 2010 Census, the population was 80,455. Most of the city is located in Gregg County, of which it is the county seat;[3] only a small part extends into the western part of neighboring Harrison County. It is situated in East Texas, on the grid of Interstate 20 and U.S. Highways 80 and 259, just north of the Sabine River. Longview is a commercial hub for the Longview Metropolitan Statistical Area.

Longview is the principal city of the Longview Metropolitan Statistical Area, which is part of the larger MSA made up of Gregg, Upshur, and Rusk counties (population 271,669).[4] Longview is considered a major hub city in the region, as is the nearby city of Tyler. 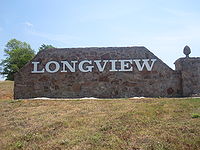 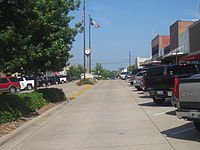 Downtown Longview in the historic district 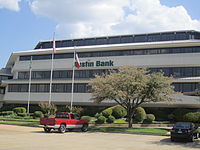 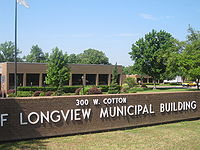 The structure of the management and coordination of city services is:[8]

Longview is part of Texas' US Congressional 1st District, which is currently represented by Republican Louie Gohmert.

Winter: Winters are mild. Average snowfall is less than 2”. There are usually one or two ice storms each winter. Normal highs are from the 50s-60s. Lows range from 30s to 40s. Temperature rarely dips below 20 and occasionally can get as warm as 80 during the winter months.

Spring: The season brings storms as a transition from winter to summer. Temperatures range from 60s-80s for the high, and 40-60s for the low. The date of the last frost is April 4. Severe thunderstorms are common during this season as cold fronts pass though the area. This is the wettest time of year

Summer: The summertime is hot and humid. Temperatures slowly climb from the 90s to the 100s going into the dog days of summer. Lows are in the 70s. This is the driest and sunniest time of year. Heat index can climb to around 110.

Fall: It’s marked by the first cold front that knocks the 100 degree temps down into the 90s. Fall starts in mid September and lasts until December. Foliage begins to change in late October. Temps start cooling down and dew points begin to drop.

The Multicultural Festival of Longview is an event that attracts people country-wide. This event is held in the fall by the local Race Relations Committee. They boast a plethora of live entertainment, exhibitors, and cuisine that reflect the many ethnicities and cultures that make up Longview.

The East Texas Boat, RV and Camping Expo attracts people from around the region. This event is held the last weekend in January each year. 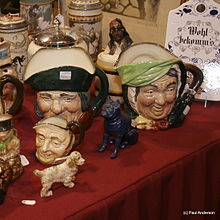 The Zonta Antique Show and Sale is a three day event held on the first weekend in March. One of the most popular antique shows in the region, it attracts antique dealers from all over the country who come to show and sell their antiques and collectibles to the many that attend from across East Texas.

The annual Memorial Day Weekend Motorcycle Rally, otherwise known as Party In The Pines, attracts motorcycle riders and clubs from across Texas, Louisiana, Arkansas and Oklahoma. Begun in 2006, the event is growing with added attractions, exhibits and attendees each year. An open rally, all motorcycles and riders are welcome to come and enjoy the nightly music, daily activities, vendors and Sunday Patriotic Motorcycle & Flag parade through the city of Longview. More than 300 motorcycles participate in this parade which is escorted by the Longview Police Department's Motorcycle Traffic Unit. All active military personal in uniform are offered free admission to the event.

AlleyFest happens on the streets of Downtown Longview Texas

AlleyFest is held on the first weekend of June every year. Begun in 1978 with 39 artists in Historic Bank Alley and called "Alley Art", the show has grown each year. Today AlleyFest includes Alley Art, Alley Run (10K, 5K and 1Mile runs), Music Fest, Kids Fest and a Food Fest. Each year AlleyFest offers special exhibits such as antique car shows, Texas Parks and Wildlife traveling educational program, Budweiser Clydesdales, and others. Music is provided by popular and well known bands and have included Three Dog Night, Jefferson Starship, Percy Sledge, Kenny Wayne Shepherd, Blue Oyster Cult and more. AlleyFest is a street festival in held in Longview's historic "One Hundred Acres of Heritage" downtown. It is a Real East Texas celebration to the arts and heritage of Longview.

The popular Balloon Glow was first performed in Longview 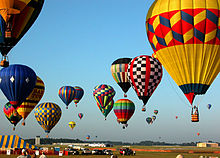 The Great Texas Balloon Race is held each July at the East Texas Regional Airport. Begun as a celebration for the new Longview Mall in 1978, it has grown to become a world-class competitive event that attracts the best hot air balloon pilots in the world. Balloon flights begin the event on Friday morning with a flight over the City of Longview. Launch and landing sites change each year as they are always determined by wind and the weather. Balloon Glows on Friday and Saturday night entertain crowds with an awesome display of color and excitement. One of the most popular things to do at the event is to be able to get up close and watch how balloons are inflated and operate. It should be noted that the city's previous logo depicted a hot air balloon. Many of them can still be seen on area water towers and city vehicles.

East Texas Regional Airport offers service to Dallas-Fort Worth International Airport via American Eagle. The airport continues to grow. In 2007 it was designated a foreign trade zone.[citation needed]

The airport is known by pilots around the region for its large 10,000 ft (3,000 m). long runway, which allows it to serve as a backup landing site for U.S. space shuttles.[citation needed]

Amtrak passenger rail service is available on the Texas Eagle through a downtown terminal. Longview's Amtrak rail station is the second busiest in the state of Texas and the fourth busiest station along the Texas Eagle route. The Longview Amtrak station is a connection stop where passengers can connect to the Texas cities of Nacogdoches, Houston and Galveston, as well as Shreveport, Louisiana by motorcoach. Daily trains between Chicago, Illinois and San Antonio stop each morning (Chicago-San Antonio) and each evening (San Antonio-Chicago). Monday, Wednesday and Friday, the Longview Amtrak station serves Chicago to Los Angeles trains. The return train, Los Angeles to Chicago stop in Longview on Sunday, Tuesday and Friday. It serves about 20-50 passengers per day. A proposal is in the works for a high-speed rail system from Dallas / Ft. Worth to Shreveport along the I-20 corridor.

♦U.S. Highway 80, runs through the central district of Longview. U.S. Hwy 80 was once a coast to coast highway from Tybee Beach near Savannah, Georgia and ran continuously across the southern part of the United States to San Diego, California. Today its western terminus is in Dallas, Texas making the length only 1,032 miles (1,661 km).

♦U.S. Highway 259 is a 250-mile (400 km) north/south spur route connecting U.S. 59 from Nacogdoches, Texas and U.S. 59 near the Oklahoma/Arkansas border just south of Forth Smith, AR. Before Interstate 20, US 259 went through the center of Longview on a route that now is designated Texas State Highway 31 and Spur 502

♦Texas Highway 281 is a 19.3-mile (31.1 km) loop highway that circumnavigates much of Longview from its east connection at I-20 east of the Gregg/Harrison county line to I-20 in Longview. It runs northward, westward, southward and eastward around the city.

Longview is accessed easily by I-20. New construction has prompted some major upgrades to the city’s system of roads. Medians have been added to Loop 281 as Phase I of the project is nearing completion. Phase II of the project will upgrade the road to a six lane parkway. Slated to start in 2009 TxDOT has informed Longview officials that the funds have been withdrawn placing Phase II on indefinite hold. TxDOT is researching an outer loop around the north side of Longview to complete the East Texas Hourglass. The road will loop around Longview and Tyler and is slated to start in 2012.

The new I-69, part of the Trans-Texas Corridor, will be passing just east of the Longview area between Longview and Marshall. There has been huge local opposition to the 1/2 mile wide corridor that will include 6 lanes of traffic, along with rail lines and truck-only lanes. The planned I-69 highway will run near or over the current US 59 highway. 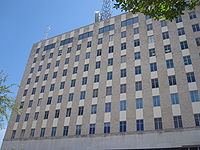 Longview's tallest building is 10 stories. When it was built in 1956, it was built to be able to be expanded to 17 stories. 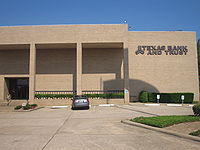 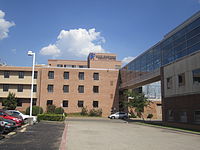 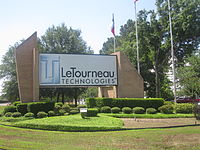 The economy in Longview is healthy. Despite a national downturn in the housing market, Longview has been growing, and home prices continue to rise. Some major sectors of the Longview economy include the East Texas Oil Field, services, technology, such as Exponential Networks, and manufacturing. In 2007, Longview added some major chain stores to the north side of the municipality. The addition of Kohl's, two Starbucks, a new Target, a third Wal-Mart supercenter on the south side and a handful of hotels means Longview is becoming a regional hub for shopping. Keeping shoppers in Longview and away from Tyler, Dallas and Shreveport has been an important strategy for the city. Most new construction has been located on the north side around Hawkins Pkwy. and US 259, with lesser development on the south side near Estes Pkwy.

According to the municipal 2008 Comprehensive Annual Financial Report,[18] the top employers in the city are: 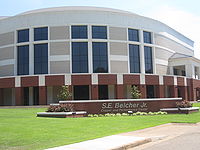 The city of Longview is home to three institutions of higher learning and two trade (cosmetology) school:

Longview and Gregg County are part of the Tyler-Longview-Lufkin-Nacogdoches DMA (Designated Market Area), DMA #110. The following in-market television stations are available over the air.

The 5 major network stations in the market have local newscasts which all originate from Tyler. KYTX formerly presented a Longview centered newscast, which ended in 2010. The station does still continue to broadcast Longview news from their Longview newsroom, which is said to be the top TV newsroom in the city.[citation needed] The once-daily KFXK newscast is at 9:00 PM weekdays.

In addition to the in-market stations, most areas can receive some or all of the following stations from the Shreveport, LA - Texarkana, TX DMA:

Longview and Gregg County are part of the Tyler-Longview Arbitron Radio Market, market # 145. The following radio stations can be reliably received in most parts of the city.