Jerome "Chef" McElroy (pronounced Mac-uhl-roy) is a fictional character on the Comedy Central series South Park. He was voiced by Isaac Hayes. A cafeteria worker at the local elementary school in the town of South Park, Colorado, Chef was generally portrayed as more level-headed than the other adult residents of the town and his guidance was often sought by the show's core group of child protagonists – Stan Marsh, Kyle Broflovski, Eric Cartman, and Kenny McCormick – as he was usually the only adult they consistently trusted. To an inadvertent fault, he would frequently give inappropriate advice, usually in the non sequitur form of a lascivious soul song.

Chef was inspired by Hayes and other popular soul singers of the 1970s, as well as an actual dining hall worker encountered by series co-creator Trey Parker while he attended the University of Colorado.[1] Chef played a less prominent role as the series progressed beyond its earlier seasons, and the character was killed off in the beginning of the tenth season in "The Return of Chef", in response to public controversy with Hayes, who left the show after the controversial episode "Trapped in the Closet", which satirized Scientology.

In tradition with the show's animation style, Chef is composed of simple geometrical shapes, and is animated with use of a computer, though he is given the impression of being a construction paper cutout composition animated through the use of stop motion, which was the technique used to animate the "Spirit of Christmas" shorts and the show's first episode.[2] Chef is an overweight African-American who commonly wears blue pants and a red shirt. He wears a beard, and frequently dons a traditional chef's hat, even when he is not at work.

Until Token Black and his family had a more notable role starting in the show's fourth season, Chef was portrayed as the only black resident in all of South Park. Parker and co-creator Matt Stone initially planned to have one of themselves voice the character, fearing that their ideal candidates of Hayes, Lou Rawls, and Barry White would never agree to voice the character because the duo had admittedly and purposefully created him as a "stereotype" to reflect what they felt was the perception most inhabitants of less-diverse mountainous Colorado towns had of black people.[3][4][5] However, Hayes agreed to voice the character due in part to the audacity of some of the show's early scripts.[3][6] Chef (usually kindheartedly, though not always) referred to most people in town with the pejorative "crackas", including the children.

Chef, after abandoning his musical aspirations, moved to South Park with plans to open his own restaurant.[7] Before this, he had befriended several famous recording artists in the music industry, including Elton John and Meat Loaf, helping them to launch their successful careers.[8] Despite failing at yet another dream, Chef made his way onto the South Park City Counsel, representing Public Safety. In addition to dispensing advice to the children and a few of the adult townsfolk, Chef spoke out against what he felt were outrageous ideas. For example, he opposed the rampant prescription of Ritalin,[9] and he objected to the town's acceptance of Mr. Garrison committing purposefully flamboyant sadomasochistic acts in front of schoolchildren.[10] Chef once briefly converted to Islam and adopted the name "Abdul Mohammed Jabar Rauf Kareem Ali" when he demanded that South Park change its official flag because it depicted the town's racist past.[11] On several other occasions, Chef has helped save South Park (and in a few other instances, the entire world) from potential disasters.[12][13][14][15][16][17]

Chef is also known for frequently engaging in casual sex, of which he often expressed his habit through song. He drove a 1980s "woodie" station wagon with a vanity plate that read "LUV CHEF". He was often seen accompanied by numerous young women when at home or on vacation, and was even revealed to have had a one-night stand with Kathie Lee Gifford.[18] He once resorted to male prostitution in an effort to raise money to pay legal fees, and had sex with nearly every woman in South Park before having to stop due to exhaustion.[8] Chef briefly became an office worker and took up monogamy after meeting a woman named Veronica. The two were engaged to be married until it was revealed that Veronica was actually a succubus.[19]

Chef's parents, Nellie and Thomas McElroy, live in Scotland. The couple have made two major appearances in the episodes "The Succubus" and "The Biggest Douche in the Universe", and made a brief cameo in a town Christmas celebration in "Red Sleigh Down". Interestingly, they are not seen at Chef's funeral in "The Return of Chef".

Relationship with the children

Chef endearingly called the boys "the children" or just "children" (even when referring to one individually), and, unless he was preoccupied with a female companion, was usually willing to assist them with whatever help they needed. He was consistently the only adult in town who the boys held in high regard, and they viewed him as their friend.[20] They were also visibly saddened when having to confront the possibility of not having Chef in their lives.[19][20] In addition to being fans of his food, the boys would often heartily anticipate encountering Chef where he would serve them in the school lunchline so that they could explain whatever dilemma was affecting them, usually only after their traditional greeting:

The boys would sometimes take it upon themselves to travel to Chef's house individually, to seek his advice on all manners of their problems, specifically relationships. He would agree to give the boys explanations or advice in the form of a soul song, which usually wound up being solely about sex, whether or not sex was relevant to the topic at hand. Hearing the songs would often leave the boys even more confused and with no further understanding of what they were initially inquiring about. In earlier seasons, Chef was often approached by the children when they were unfamiliar with a sexual term or practice. This happened so often that it eventually aggravated Chef, who pleaded with them to stop asking questions he felt were not appropriate for him to answer (such as singing to them what a prostitute was and only stopping after spotting the principal, proclaiming "these children tricked me!"). Despite this, the children continue asking these questions, much to his anger. An absent-minded Chef would sometimes answer anyway, not realizing his lapse until the damage had been done. Chef would later acknowledge that doing this had repeatedly gotten him in trouble with his boss, Principal Victoria.[21]

In addition to singing in an effort to explain something to the children, Chef would also sing about things relevant to what had transpired in the plot. These songs were original compositions written by Parker, and performed by Hayes in the same sexually suggestive R&B style he had utilized during his own music career. Within the show, Chef was the original composer of these songs, including "Stinky Britches", which was depicted as having been covered by Alanis Morissette without proper credit being given to Chef. When Chef was left with legal debt after losing a court case to have himself credited as the song's original writer, several bands and artists (guest starring as themselves) held a concert dubbed "Chef Aid" to raise the funds. The episode inspired an album which includes many of the full-length versions of the songs Chef had performed in the show's first two seasons. As the series progressed and Chef's role became more intermittent, his spontaneous outbursts into song became less of a show standard.

Parker and Stone originally planned to have Chef sing a song in every single episode but abandoned the idea after finding it too challenging and fearing writing too many songs would make them less funny, similar to the logic they used when they stopped writing a death for Kenny in every episode.[22]

On January 4, 2006, Hayes defended South Park's style of controversial humor to The A.V. Club and XM's Opie and Anthony Show, going so far as to note that although he was not pleased with the show's depiction of Scientology, he "understand[s] what [Matt and Trey] are doing." However, on March 13, 2006, nearly two months after suffering a stroke,[23] Hayes was reported to have quit South Park over objections to the show's attitudes toward and depiction of various religions, claiming that the show had crossed the line from satire into intolerance. However, despite the content of the official press release, there remains considerable speculation about the motivations behind his departure. Parker and Stone assert that he quit due to the controversial episode "Trapped in the Closet", and its treatment of Scientology, as Hayes was a member. Stone commented in a manner that suggested that Hayes practiced a double standard regarding the treatment of religion on South Park: "[We] never heard a peep out of Isaac in any way until we [lampooned] Scientology. He wants a different standard for religions other than his own, and to me, that is where intolerance and bigotry begin."[24] Fox News reporter Roger Friedman suggested that, because he was still suffering from the effects of his stroke, Hayes was hospitalized and not in a position to make a rational decision to leave the show.[25] Friedman also reported that Hayes left the show because of the external pressure forced by his fellow Scientologists and that the decision was not voluntary, and the original press release announcing his departure was put out by someone who was not authorized to represent him.[25] 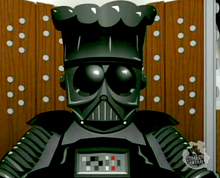 Nine days after Hayes's departure from production, he was satirized in the show's season 10 premiere "The Return of Chef". For the episode, voice clips of Chef were taken from previous episodes and linked together to form new dialogue to support the plot,[29] which involved Chef leaving South Park to join the "Super Adventure Club", which eventually brainwashed Chef until he had the mindset of a child molester. The organization combines outdoor activities with child molestation, an act they perceive as justified because of their bizarre religious beliefs (a not-so-subtle jab at Scientology).

As the boys attempted to rescue Chef from the club's headquarters, the people from the club reminded him of why he left South Park, and Chef decided to remain with the club. When he was walking back to the club, a rope bridge he was standing on was struck by lightning. He fell down and suffered a violent death, culminating with his mutilation at the hands of a grizzly bear and a mountain lion. Finally, he discharges feces (a recurring death gag occasionally used in the series which Cartman claims confirms that person is really dead).

South Park held a memorial service for him (Canadian comedians Terrance and Phillip even attended, despite having never met the man themselves), in which Kyle gave a eulogy stating, "We shouldn't be mad at Chef for leaving us, we should be mad at that fruity little club for scrambling his brains", a deliberate jab at Isaac Hayes's life with Scientology.

Mimicking a scene from Star Wars Episode III: Revenge of the Sith, Chef's body was secretly revived by the Super Adventure Club, who managed to make him a cyborg — identified on the show's official website as "Darth Chef". He is fitted with a Darth Vader-esque suit with a helmet similar to a chef's hat and was given a red spatula-shaped lightsaber. Darth Chef's voice was provided by British comedian and filmmaker Peter Serafinowicz, who voiced Darth Maul in Star Wars Episode I: The Phantom Menace. Darth Chef has not made an appearance in subsequent episodes, but has appeared with other characters in the background of the South Park opening sequence.