Turpentine (also called spirit of turpentine, oil of turpentine, and wood turpentine) is a fluid obtained by the distillation of resin obtained from trees, mainly pine trees. It is composed of terpenes, mainly the monoterpenes alpha-pinene and beta-pinene. It is sometimes known as turps.[citation needed]

The word turpentine derives (via French and Latin) from the Greek word τερεβινθίνη terebinthine, the name of a species of tree, the terebinth tree, from whose sap the spirit was originally distilled.[1]

Mineral turpentine or other petroleum distillates are used to replace turpentine.

One of the earliest sources was the terebinth or turpentine tree (Pistacia terebinthus), a Mediterranean tree related to the pistachio.

Turpentine distilled from the California pines such as Ponderosa Pine (Pinus ponderosa) and Gray Pine (Pinus sabiniana) yield a form of turpentine that is almost pure heptane.[2]

When producing chemical wood pulp from pines or other coniferous trees with the Kraft process, turpentine is collected as a byproduct. Often it is burned at the mill for energy production. The average yield of crude turpentine is 5–10 kg/t pulp.[3]

Industrial and other end uses 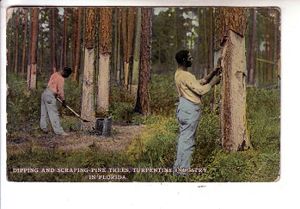 The two primary uses of turpentine in industry are as a solvent and as a source of materials for organic synthesis.

As a solvent, turpentine is used for thinning oil-based paints, for producing varnishes, and as a raw material for the chemical industry. Its industrial use as a solvent in industrialized nations has largely been replaced by the much cheaper turpentine substitutes distilled from crude oil.

Canada balsam, also called Canada turpentine or balsam of fir, is a turpentine which is made from the resin of the balsam fir.

Venice turpentine is produced from the Western Larch Larix occidentalis.

Turpentine is also used as a source of raw materials in the synthesis of fragrant chemical compounds. Commercially used camphor, linalool, alpha-terpineol, and geraniol are all usually produced from alpha-pinene and beta-pinene, which are two of the chief chemical components of turpentine. These pinenes are separated and purified by distillation. The mixture of diterpenes and triterpenes that is left as residue after turpentine distillation is sold as rosin.

Turpentine is also added to many cleaning and sanitary products due to its antiseptic properties and its "clean scent".

In early 19th-century America, turpentine was sometimes burned in lamps as a cheap alternative to whale oil. It was most commonly used for outdoor lighting, due to its strong odor.[4] A blend of ethanol and turpentine added as an illuminant called burning fluid was also important for several decades.

Turpentine has long been used as a solvent, mixed with beeswax or with carnauba wax, to make fine furniture wax for use as a protective coating over oiled wood finishes (e.g., lemon oil).

In 1946, Soichiro Honda used turpentine as a fuel for the first Honda motorcycles as gasoline was almost totally unavailable following World War II.[5]

Turpentine is an organic solvent. Its vapor can irritate the skin and eyes, damage the lungs and respiratory system, as well as the central nervous system when inhaled, and cause renal failure when ingested, among other things. Being combustible, it also poses a fire hazard.

Turpentine and petroleum distillates such as coal oil and kerosene have been used medicinally since ancient times, as topical and sometimes internal home remedies. Topically it has been used for abrasions and wounds, as a treatment for lice, and when mixed with animal fat it has been used as a chest rub, or inhaler for nasal and throat ailments. Many modern chest rubs, such as the Vicks variety, still contain turpentine in their formulations.

Taken internally it was used as treatment for intestinal parasites because of its alleged antiseptic and diuretic properties, and a general cure-all[6][7] as in Hamlin's Wizard Oil. Sugar, molasses or honey were sometimes used to mask the taste. Internal administration of these toxic products is no longer common today.

Turpentine was a common medicine among seamen during the Age of Discovery, and one of several products carried aboard Ferdinand Magellan's fleet in his first circumnavigation of the globe.[8]

Turpentine was a common additive in cheap gin until the 20th century and gave it its characteristic juniper berry flavor without the need for pricier distillations with aromatic spices and berries.[9]