The Oxford Saints American Football Club compete in the BAFACL (British American Football Association Community League) in the UK. Currently the team compete at senior level in BAFL Division 1 South West Conference. The club are based at Abingdon RFC in Oxfordshire.

Season 2010 sees the Saints up against The South Wales Warriors, Leicester Falcons, Birmingham Bulls, Tamworth Phoenix and Nottingham Caesars. Games are played at Abingdon Rugby Club in Oxfordshire on Sundays from April through August. For details of home games refer to the main Oxford Saints website.

Set up in 1983, the Oxford Saints are one of the oldest American Football teams in the UK. The brainchild of Steve Abbott, the team began life as the Oxford Eagles, but following a Radio Oxford phone in competition the team was renamed the Oxford Bulldogs, and they began playing in earnest in 1984. Bulldogs contemporaries at the time were such illustrious Britball names as the London Ravens, Heathrow Jets and Stock Exchange Stags. The Bulldogs first 3 organised games were won and set the tone for a long and successful future.

As American Football's popularity increased the first British league was formed, and in 1985 the Bulldogs officially joined the AFL. The Bulldogs stormed through a hugely impressive first season with an 8-1-1 record, being defeated only by the mighty London Ravens at the quarter final stage of the playoffs.

In 1986 the AFL became the Budweiser League and for the next 3 seasons the Bulldogs played with mixed success, once again reaching the quarter finals in 1987.

In 1989 the Bulldogs were joined by local rivals the Abingdon Pharaohs, strengthening the squad and broadening it's local fan base. The Budweiser League then morphed into the 'Combined Gridiron League' and then the 'CMAA', an unsettled period in Britball's history matched by the Bulldogs distinctly average 4-6 records over each of those 2 seasons.

1991 saw a quantum leap in the structure of American Football in the UK as the British National Gridiron League (BNGL) was formed. It was a period of stability within the game that was matched by the Bulldogs' increasing success. Instrumental in this success was American head coach, and former Chicago Bear, Steve Conner. Coach Conner led the team to a 9-1 record and the clubs first playoff appearance for 4 years, defeated once again at the quarter final stage in a thriller against Sutton Coldfield.

1992 saw the Bulldogs move into a new era as they became the Oxford Saints. Driven forward by their tireless and inspirational General Manager, Roger Hedges, the club secured their first major sponsorship deal and moved to a new home at the Oxford Stadium in Cowley. Another fine 8-2 season followed but yet again the Saints fell at the quarter final hurdle, this time to the DeLonghi Knights in Farnham. It was the same story the following year as the Knights and the quarter finals proved too big a hurdle to overcome. 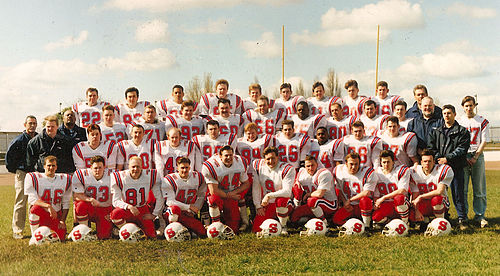 Prior to the 1994 season Coach Conner returned to the US leaving a legacy of professionalism, pride and talent that would serve the Saints well. Richard Emerick, another experienced US coach picked up the reins and although the Saints failed to make the playoffs after a 6-4 season things were beginning to take shape.

An experienced squad led by the inspirational BJ Johnson at quarterback featured myriad offensive talents; running backs Nick Whitford, Billy McMahon and Jason Lowe ran behind a huge and powerful offensive line of steve abbott and everett mclean, and Steve Belcher led a fleet receiving corps. The defense was equally potent with no nonsense defensive lineman Morris Coleman, the Whitford brothers, Nick and Paul, joined by a young Andrew 'Snake' Day, Danny Hawkey and a talented secondary featuring Nick Wykes, Iain Noakes, Kevin Joseph and American Airman Scott Grady. The wheels threatened to come off during the 1995 season when the inspirational Emerick was forced to return to the US for family reasons. Long time Bulldog/Saint and defensive co-ordinator Chris Janes stepped up and took the Head Coaching role mid way through the 1995 season. Finishing the season with a 6-3-1 record in BNGL Division 3, which featured a last gasp tie with the London Blitz, the Saints made the playoffs albeit facing every game away from home. 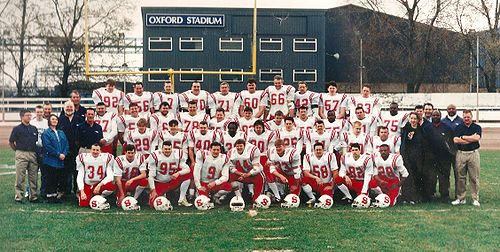 After the (now defunct) Invicta Eagles were swept aside in the first round the highly fancied London Blitz and then Colchester Gladiators were vanquished in epic confrontations leaving the Saints to face the Gwent Mustangs in the final at Leicester's Saffron Lane Stadium. A 14-6 victory, inspired by MVP 'Snake' Day, followed and the Oxford Saints were finally champions.

The Saints subsequent promotion saw them placed in BNGL division 2 for 1996, and after a respectable campaign league restructuring saw them competing in division 1 in 1997. A superb 9-1 season behind second year quarterback Wayne Mayers had the Saints going all the way to the semi finals where they were defeated by the Nottingham Caesars. Disappointing campaigns followed and when the league was restructured again in 2000 the Saints found themselves in division 2 of the British Senior League.

A 7-1 campaign in 2000 was followed by an impressive 8-0 season in 2001, both ending in semi final disappointment at the hands of the PA Knights and Ipswich Cardinals respectively. After a poor 2002 season Coach Janes moved upstairs as Director of Football and Phil DeMonte took over as Head Coach.

Coach DeMonte only stayed at the Saints for 1 season, as work commitments took him overseas, and the team again made the playoffs eventually beaten by the Gateshead Senators. With Coach Janes back on the sideline for the 2004 season the team compiled a 4-5-1 record before racing through the newly formed BAFL division 2 in 2005. The Saints 9-1 record had them among the favorites for the title but this time the Kent Exiles ended their hopes.

However, with the experienced Mayers at QB, the Saints added powerhouse running back Chris Taylor to their 2006 squad and roared through their season 9-1. This time they crowned their achievement by winning the Division 2 title. Behind the powerful running of Game MVP Taylor and the sure leadership of Mayers the Saints came from behind to beat the West Coast Trojans 29-28 in one of the most exciting games ever played on these shores.

Promoted to BAFL division 1 in 2007, consecutive solid seasons of 6-4 and 4-5-1 respectively have seen the Saints cementing their position and gradually rebuilding the squad.

Season 2009 saw the Saints take another big step forward. With Chris Taylor again leading a powerhouse running game and Jay Taylor growing in confidence at Quarterback several additions were made to the playing and coaching staff. Long time BAFL offensive wizard Len Scott and former London Olympian Matt Coppinger boosted the offensive coaching staff, Defensive back Nick Wykes returned as player coach after a 3 year hiatus and former Saint and PA Knight Steve Belcher returned at wide receiver and kicker, providing the highlight of the season when he landed a record 57 yard field goal as time expired to defeat the Birmingham Bulls in week 7. As several of the younger members of the Saints squad matured into their roles and began making their mark, the Saints immediately began to click and behind a marauding defence began an assault on the division 1 crown. Led by Andrew 'Snake' Day and Ian 'Ice' Harry and featuring stars in the making such as Chris Ellis and Jonny Dover the Saints defence only gave up 6 points through their first 3 games. Saints hopes of a conference crown were dashed in the final game of the season by a strong Tamworth Phoenix side, the only side to beat the Saints in regular season play and Oxfords season ended one game later in an epic encounter against Cambridge. An 8-2 mark represented huge progress and also a swansong for legendary Head Coach Chris Janes, who retired from active coaching and assumed the role of General manager.

Len Scott assumed the head coaching mantle for the 2010 season. Coach Scott reinforced the Saints roster with an infusion of Oxford Cavaliers players and Rookies new to the sport. The already strong Saints defense was bolstered with the addition of Dean Bryan, Adam Cartwright and Clive Russell, while the offense, under the tutelage of Matt Coppinger, featured rookie running back sensation Kyle Micallef alongside Jay and Chris Taylor and a growing group of young British talent.

Competing once again in the South West conference of Division 1 the Saints got out to a strong start before running into the Premiership bound Phoenix, and defeated all but the Tamworth based outfit en route to a 7-3 record and a second straight playoff contest against Cambridge. Confident after the nailbiting encounter of 2009 the Saints were stopped agonisingly short of reaching the Division semi-finals as the Cats prevailed 13-7.

The Oxford Saints constituted their Hall of Fame in 2008.
Inductees: