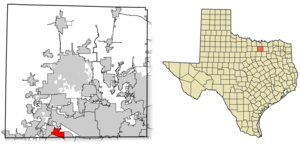 Trophy Club is a town in Denton and Tarrant Counties in the of . The population was 6,350 at the 2000 census.

There were 2,271 households out of which 43.2% had children under the age of 18 living with them, 78.6% were married couples living together, 4.5% had a female householder with no husband present, and 14.8% were non-families. 12.5% of all households were made up of individuals and 2.2% had someone living alone who was 65 years of age or older. The average household size was 2.80 and the average family size was 3.05.

The town is served by the .

Trophy Club is governed by a Council-Manager form of government, in which the mayor serves as figure head for the Town Council. The Town Council has 5 voting members, and the mayor votes only to break a tie.

Municipal Utility District (M.U.D.) (The city's water supplier) This is a group of elected officials that supply water, own the fire station, and also own the city hall (M.U.D. Building) (As of May 2, 2008)