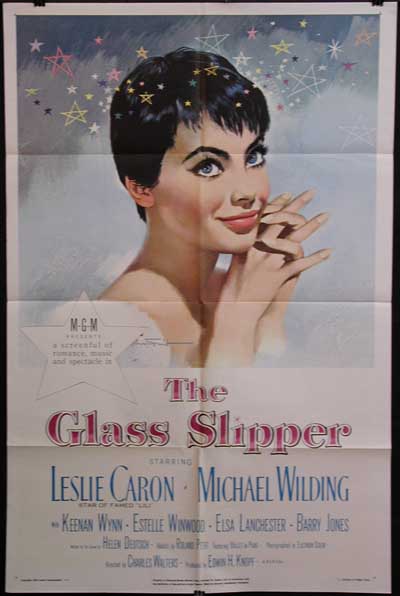 "The Glass Slipper" is a 1955 adaptation of "", made by , directed by and produced by from a screenplay by . The music score is by , the cinematography by , the art direction by and and costume design by and .

The film stars as Cinderella, and as the Prince, with , , , Barry Jones, , and as Narrator.

In the '70s, the film was rerun on television as "Ella", on the syndicated showcase.

Ella (Leslie Caron), who is sometimes teased as "", is a lonely and misunderstood young woman who lives in a European . An orphan who has become an almost-servant to her stepmother the Widow Sonder (Elsa Lanchester), and her stepsisters, Berdina (Amanda Blake) and Serafina (Lisa Daniels), she is shunned by the townspeople because of her anti-social behavior and constant boasting that will live in the Palace one day (as a gypsy told her late mother so when she had been pregnant with Ella).Prince Charles (Michael Wilding) is the son of the Duke (Barry Jones) who rules the principality. The Prince has been studying at the University of Paris for many years, and the Duke is delighted that he has returned, which will be celebrated by three days of festivities and a Ball on the final day. Now that Charles is back, he starts to recall old memories he had of growing up there, including a small girl with unbearably sad eyes whom he saw crying when he was just a boy.

After getting into a spat with her stepfamily over the Prince's appearance, Ella runs away to her favourite place, which is a small secluded pool on the Palace grounds. There she meets an eccentric old woman named Mrs. Toquet (Estelle Winwood) who becomes her first friend.

A few days later she returns to the spot, hoping to meet Mrs. Toquet, but instead finds Charles and his friend Kovin (Keenan Wynn). Ella asks them where they are from and they tell her that they come from the Palace, with Charles claiming that he is the son of the Chief Cook in the Palace. Charles then recognises Ella's eyes as those belonging to the girl he saw years ago, but Ella thinks that he is making fun of her and pushes him into the pool. Charles is intrigued by Ella and has Kovin talk to the people of the principality to find out everything he can about her.

Some days later Cousin Lulu (Lurene Tuttle) is visiting the Sonder home. Ella is supposed to be all cleaned up to receive their guest, but they realize that she is barefoot. Ella remembers that she left her shoes at her favorite place, so she runs off to collect them, only to find Charles waiting for her with the shoes. Ella apologizes for pushing him into the water and he apologizes for hurting her feelings. They talk, and Charles gives her an invitation to the Ball, to which Ella replies that she cannot dance. Charles says that she should learn to dance since she's going to live in the Palace some day, so he teaches her. At the end of a waltz Charles kisses her, and Ella runs away.

After the Widow Sonder, Berdina and Serafina leave for the ball, Mrs. Toquet arrives, bringing with her a ball gown and pair of glass slippers she has "borrowed" for Ella. She has also arranged for a coach to take Ella to the palace, though Ella has to leave the Palace by midnight.

At the Palace Ball, Ella is besieged by young men wanting to dance with her, but she refuses to speak to anyone, focusing all her attention on trying to reach the Palace kitchens to find Charles. When Charles learns of her presence, he waltzes with her and persuades her to look up at him. Ella is stunned to find that her friend is the Prince.

The other guests, not knowing who the newcomer is, note her exotic colouring and surmise that she is a foreign lady of noble birth, perhaps Egyptian because of her short hair. When the clock strikes midnight, Ella runs away, leaving one of her glass slippers behind, which is then picked up by Charles. Prince Charles informs his father that he has met the woman he wants to marry &ndash; Kovin, picking up on what he's overheard at the party, hurriedly explains that Ella is a princess of Egypt.

By the next morning, everyone has heard that the Prince has chosen an Egyptian Princess to be his bride. When Ella hears this news, she is devastated. Ella decides to run away, first stopping at her favorite place to see Mrs. Torquet, whom she says goodbye to. Ella throws herself down on the ground sobbing, until she hears a familiar voice. She looks up and sees the Prince, who is holding her other glass slipper, which he declares will fit the foot of the princess he intends to marry.

After glancing briefly at the crowd of people who had just arrived, including her stepmother and stepsisters, the Prince, Ella, Kovin and the Prince's men, ride away to the Palace, and all ends happily.