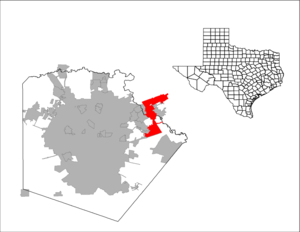 Schertz is the largest city of the Randolph Metrocom, which consists of towns and cities surrounding the . In addition to Schertz, other Randolph Metrocom communities include Live Oak, Kirby, Converse, Marion, Cibolo, , Windcrest, Garden Ridge, and Selma. These towns are located in Comal, Bexar, and Guadalupe Counties and combined have a total of 335,000 residents and growing rapidly.

The first settlers came to Schertz around 1843. Some of the families on the immediate land surrounding Schertz were the Boettigers, Schertzs*, Schneiders, Seilers, Maske, and Mergele. Members of the Schertz family still reside in the City. The first name of Schertz was "Cibolo Pit," then "Cut Off;" the reason for this name was when the Cibolo Creek flooded, the settlement was cut off.

The first settlers planted wheat, oats, and corn, which did not need special equipment to harvest and process. In later years, cotton was planted, and proved to be very productive and a cash crop. In fact, so much so, that there were two cotton gins in Schertz at one time. In 1870 the first gin was built by the Schertz family. It was powered by mules and then in later years by steam. This gin was located where the post office is at the present time.

The second cotton gin built by Weyel and Kallies was between First and Second Streets. During the height of the ginning season, they operated day and night. In later years, there also was a corn sheller and lumber yard.

The first school during the eighteen nineties (1890) was across the Cibolo Creek where the Randolph Stables are now located. In 1917 a new two story brick school was built, and later torn down to make room for the O'Henry School. The land for the school was donated by Mr. Adolph Schertz.

In 1876, one of the largest boosts to Schertz came when the Galveston, Harrisburg, and San Antonio Railroad was built through the town. This gave the people a chance to travel to San Antonio by rail instead of wagon or buggy, besides goods being shipped in and out. The first post office was established in 1882. At that time Schertz was still known as Cut Off. In 1899 it officially became Schertz, Texas. Sebastian Schertz owned and operated a general store when the railroad was constructed.

A big and very active shooting club was located on the site that is now the City Park. There was an annual shooting tournament held that was called "Koenig Schiesen" or King Shoot. This was a two day affair with people coming from San Antonio by train. The last night, a big dance was held to close the event for that year. A piece of live coal, blown from a switch engine, that was carrying gravel cars from or to the rock crusher, was supposed to have blown on the shingle roof of the dance hall, setting it on fire and completely destroying it. It was later rebuilt but eventually the club disbanded.

The rockcrusher was at one time located in the Cibolo Creek across from the public utilities of the City of Schertz. This was destroyed in 1913 when the Cibolo Creek had its biggest flood recorded. It flooded many people out of their homes.

The first church in Schertz is the present day United Methodist Church on First Street. One of the oldest business buildings, the red brick building on Main Street, was built by Mr. Willie Schertz. It is now a plumbing and hardware store and Masonic meeting place. It was the first merchantile store. On the site of the present day Schertz Bank, a two story hotel, a five room hospital and drug store complex was built in 1909. The hotel was built by Mr. Henry Ebert. A Dr. Watson was the resident doctor. This doctor used two methods of transportation to see his patients, a horse drawn hack for good roads and horse back for emergencies in bad weather and long distances. In 1917 another red brick hospital on Main Street was built by Dr. C. M.Cotham and Miss Cora Karbach, a nurse. It served the surrounding communities for many years. It now is an old apartment house.

The first bank was chartered in 1913 and one of the first bankers was a Mr. Glass. He also organized what was called the National Home Guard During World War I. They drilled at night in the second story of the building that at the present time is the Masonic Lodge meeting place.

The present day Blake's Restaurat was Beck's Food Store and before that was Gerlich and Schulz, and at one time housed the post office for a while. A bakery, barber shop, cafe, butcher shops, filling stations were among the old establishments. Also in 1913 the first telephone service was the Farmer's Rural Telephone Exchange: composed of share holders. This was a way of communicating in case of emergencies. Five long rings being the signal for people to listen in. Not to many years back the Bell Telephone Company bought out the share holders, and established the present day system.

Randolph Air Force Base was arguably the biggest boom to Schertz in the late 20's, although it changed the lives of many people. A lot of farm land was bought as the air force needed convert|2000|acre|km2|0 for the air academy. There were 3 sites considered. The present site was chosen because after research, the site here showed the fog was less in the area and lifted earlier in the day, and meant more flying time. All of this boosted the economy not only for Schertz and surrounding communities but also the areas of New Braunfels, Seguin, and San Antonio.

The dedication of the West Point of the Air was in 1930. There were thousands of people present at the ceremonies with hundreds of air craft flying over.

The V.F.W. of Schertz was chartered in 1946. This organization has been very active. It served as the only place for the people to come together to enjoy themselves and for other organizations to have functions of their own. For which the whole community is grateful.

Our first fire protection was from the Randolph Field Fire Department. As time went on some Schertz business people and some of its citizens started to organize a fire department. The first business meeting of the Schertz Fire Department was February 8, 1956. Our first Fire Chief was Archie Woodward and the fire truck was stored in the old Schertz garage. Soon a fire station and city hall combination was built. The Schertz library is now in this building. Schertz was incorporated as a City by the State if Texas in 1958.

The most famous person from Schertz is alt-country-rocker , who grew up in the town.

In 1988, the half-brother of and then patriarch of the , , perished in a crash of a light plane in Schertz, described as a "freak accident" by Schertz officials.

There were 6,604 households out of which 42.1% had children under the age of 18 living with them, 67.2% were married couples living together, 10.0% had a female householder with no husband present, and 20.0% were non-families. 16.7% of all households were made up of individuals and 5.3% had someone living alone who was 65 years of age or older. The average household size was 2.82 and the average family size was 3.17.

A large number of Schertz's population is connected with the military due to the presence nearby of which can result in some degree of population turnover due to the transient nature of military service.

Number of Work Stoppages in Last 5 Years: None

Manufacturing Workers in Unions: None

Schertz sponsors a variety of exciting, family-oriented special events, including the annual 4th of July Jubilee and Parade. This four-day festival includes rides, free musical entertainment, and a food, fun and crafts venue. In 2008, the United States Air Force Band of the West will closeout the Jubilee with a free concert in the civic center July 5.

The annual Steve Simonson Foundation Party in the Park features BIG name performers, food, beverages and more. It's in September every year.

The winter holiday season is busy, and includes an arts and crafts bazaar in November and the Festival of Angels in December. Schertz even MAKES REAL SNOW during the festival for children and adults to play in. Live music and free food top off the event.

Public education in Schertz is provided through the (SCUCISD) which is composed of the neighboring towns of Schertz, Cibolo, and Universal City.

The area has undergone significant growth in recent years, necessitating the opening of a second high school in the district in 2005 called Byron P. Steele High School (in Cibolo) to supplant the already existing Samuel Clemens High School which is located in Schertz.